If you want to understand how global economics killed British Columbia’s risky liquefied natural gas gamble and the government’s promised riches and jobs, then you might want to hear out Eoin Finn.

The failure of B.C.’s LNG strategy, symbolized by last week’s death of the $11-billion Pacific NorthWest LNG terminal, is really a story about government deceit or ignorance.

“We acted like a Third World country,” declares Finn.

The B.C. government never had a coherent financial strategy, never did a proper cost-benefit analysis, and then got into bed with opaque, foreign-owned businesses, including one with links to tax evasion.

In short, Clark’s government failed to exercise any due diligence, Finn says. It made a series of reckless promises and then failed to express any regret about its outrageous mistakes.

The government’s behaviour explains why not one of proposed 20 LNG terminals has been built and, partly, why Clark is no longer premier.

The political scheme was a boondoogle from start to finish, says Finn. Clark funded the fiasco with nearly $2 billion in tax breaks and subsidies.

Finn knows what he is talking about. He has a PhD in chemistry and worked as a partner with the global accounting consulting firm KPMG for six years. Finn’s specialty was business strategy.

As a resident of Bowyer Island in Howe Sound, Finn was looking forward to retirement until he learned about Woodfibre’s proposal to build a LNG terminal in Squamish.

Finn pored over the available project documents and couldn’t find any financial benefits for the province. Nor was he impressed to learn that another company owned by Singapore tycoon Sukanto Tanoto, Woodfibre’s owner, had been found guilty of tax evasion. Or by how the government proposed to manage risks to public safety and the public purse.

He became, in short, “an accidental activist.”

B.C.’s LNG fantasy abruptly started with a 2011 earthquake and tsunami in Japan, the globe’s largest importer of LNG. The disaster damaged a nuclear power plant and led Japan to shut down 54 reactors, bringing a spike in demand for LNG in the energy-poor country. As a consequence, global LNG prices rocketed from $8 per million BTU to as high as $18.

At the same time Gwyn Morgan, the former CEO of Encana, one of North America’s largest gas producers, had become a financial backer and key political advisor to an ambitious Christy Clark.

Morgan, then also chairman of engineering giant SNC-Lavalin, a prominent LNG builder, knew the natural gas industry had a big problem. Companies had over-exploited shale gas reserves with the brute force — and costly — technology of hydraulic fracturing and flooded North American markets. When methane prices tanked, the price slump threatened the dubious economics of fracking, an industry based on easy credit and high debt.

Morgan’s solution was to kickstart an LNG industry in B.C. that could take advantage of Asia’s then-higher gas prices.

Clark’s government began pumping out documents on the imagined bounty to be earned by extracting methane, liquefying the gas and exporting it to Asia in 2012.

The documents largely mirrored Morgan’s rhetoric expressed in his Globe and Mail columns and the industry’s claims that fracked methane is clean, green and wonderful — a bridge fuel to the future.

But Finn notes Morgan “was a pretty biased source” because of his ties to two companies — SNC-Lavalin and Encana — that stood to benefit from the export of LNG.

Then came the 2013 Grant Thornton report that claimed to tally the jobs impact of building LNG terminals in B.C.

The report boasted that the construction of just five terminals would create 100,000 jobs. A month later, the report became a key part of the Liberals’ rallying cry for the 2013 election.

But the government had commissioned the report. And it gave Grant Thornton the numbers used to construct its highly questionable job estimates for a global industry that is famously capital intensive, but not known for high employment.

“Grant Thornton reviewed information provided by the province and its advisors with regard to project size, capacity, development cost and operating costs.... We are not guarantors of the information upon which we have relied in preparing our report.”

The mainstream media largely neglected to tell people that the report was government directed and that “Grant Thornton did not review feasibility studies and/or business plans for LNG project development and operation.”

Even the Canada West Foundation, a right-of-centre Calgary think tank, warned the B.C. government that it needed to do better LNG accounting.

It noted that Australia’s LNG projects were racing ahead, China could rely on Russian pipelines for methane supplies, and that “shale gas is expensive to develop.”

As a consequence, B.C.’s sudden sprint to enter the LNG market faced strong competition, high costs and “was not guaranteed.”

But Finn says nobody in the B.C. government or the mainstream media was listening.

Nor did anyone in the government want to consider the ecological cost of LNG, including the cumulative impact of drilling and fracking thousands of methane-leaking wells in northeastern B.C., or the effect on First Nations’ treaty rights.

Meanwhile the Liberal government vowed that LNG would make British Columbians rich and debt-free. The “debt-free BC” slogan was even emblazoned on Clark’s 2013 campaign bus.

According to 2014 B.C. budget documents, the province proposed to make billions in revenue based on a global spot price of $12 per million BTU and a spread of about $7 between the market price of LNG in Asia and the cost of producing gas from B.C.

But the cost of extracting shale gas in northeastern B.C. is at least $3 per million BTU, and Asian spot prices have remained below $10 for years. Before the Fukushima disaster, spot prices averaged about $6, a level to which they have now returned. That’s a spread of only $3 — not enough to generate any profits. That basic reality explains why every one of B.C.’s 20 proposed LNG projects have stalled.

“Whoever was doing the math didn’t have a clue,” says Finn.

The BC Liberal government also predicted the province would be reaping a revenue windfall after just five years of LNG operation.

Australia’s government promised the same reward. But record production of methane on that continent has generated skinny returns for the public and forced a public inquiry on the broken revenue promises.

Finn suspects the Australian government probably won’t earn anything from LNG exports for the first 15 years of a terminal’s operation. B.C., if it had ever developed an LNG industry, would likely have been in the same dismal situation.

In fact a Bloomberg news report described Australia’s experience with LNG — another rush to export with no due diligence — as a total disaster. “Everyone’s a Loser in Australia’s LNG Boom,” a recent headline summarized.

In 2014, just prior to the collapse in global oil prices (which are linked to global LNG prices), Finn says he asked Rich Coleman, then minister of natural gas development, some questions.

Given that Australia had LNG projects coming on stream, Japan was restarting its nuclear plants, Russia was building a gas pipeline from Siberia to China and U.S. LNG plants were cheaper and faster to build, how was B.C. going to get into the market?

Coleman said that B.C. had a competitive advantage because its proposed terminals were about 1,000 nautical miles closer to Japan than the east coast of Australia. (Since then Japan’s projected demand for LNG has dropped from 86 million tonnes to 77 million tonnes by 2020 as the country’s nuclear reactors come back on stream. This has further depressed LNG prices.)

And Finn says Coleman added that B.C. had another advantage: it was a “stable democracy” and China and Japan would prefer doing business with such upstanding folk.

Finn pointed out that the world’s second largest LNG exporter was democratic Australia and that’s where the conversation ended.

Coleman did not mention that most LNG analysts were already warning investors that high-cost projects in remote areas like northern B.C. didn’t have much of a chance of being built.

When it became obvious that global market conditions weren’t going to support the government’s LNG dreams, the government, which had already lowered royalties for shale gas production, poured on more subsidies.

The B.C. government cut its LNG tax from seven per cent to 3.5 per cent — among the world’s lowest.

It then added substantial subsidies. Finn has estimated that the “e-drive” electricity subsidy to Woodfibre LNG — a small project — is worth more than $34 million per year.

The Harper government also stepped in and upped the capital cost depreciation allowance for LNG developers from eight per cent to 30 per cent.

And without an economic or climate change analysis, the National Energy Board approved export licences to the tune of 290 million tonnes annually.

To keep that astounding figure in perspective, the global LNG supply, excluding Canada’s contribution, will be 385 million tonnes in 2020. Under the B.C. government plan, the province would have become the single largest LNG producer, worsening the worldwide LNG glut.

LNG development would also have jeopardized the nation’s energy security, as analyst David Hughes documented in a number of reports.

But the giveaways could not conquer economics. In the end, the global LNG glut combined with slumping prices and persistent cost over-runs killed one project after another in B.C.

Analysts now predict that oil prices will have to climb to the $65 to $70 range per barrel for North American LNG to be competitive in Asian spot markets. Prices are currently below $50.

And Asian spot prices for LNG remain around $6 per million BTU, while North American costs for extracting and liquefying the gas range between $9 and $10. The math doesn’t add up.

Fereidun Fesharaki, chairman of consulting company FGE, recently told a U.S. audience that “Between 2017 and 2020 we are increasing the global supply by 40 per cent. [There is] no way we can increase the demand by 40 per cent in three years.”

To make matters worse Qatar, currently the world’s largest LNG exporter, has vowed to increase its LNG exports by 30 per cent over the next five to seven years. 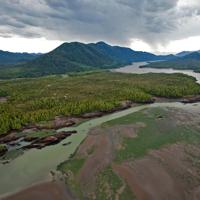 Yet many mainstream commentators lamented Petronas’s pullout from B.C. as a symptom of a national failure to attract investment.

Why can’t we be bold and export LNG like the Americans in the Gulf of Mexico, asked Deborah Yedlin in the Calgary Herald.

Yedlin didn’t mention that Houston’s Cheniere Energy, the first U.S. company to begin exporting LNG, reported losses of $610 million in 2016 following losses of nearly $1 billion in 2015. The firm also carries a long-term debt load of $24 billion and its share price is down 47 per cent from its 2015 high.

A couple of weeks ago, Finn said he offered to explain the volatile world of LNG economics to B.C.’s new NDP government.

So far it has declined.

Instead the new government promises to keep pursing the failed LNG strategy.