Canada’s conservatives are upping their digital game. Progressive politicians may want to start taking notice — as if their jobs depended on it.

CBC recently did a story on a relatively new initiative called “Ontario Proud,” a Facebook group with over 145,000 followers — more than the sum total of followers for all other Ontario political actors combined. The group produces and shares anti-Kathleen Wynne and anti-Justin Trudeau content, peppered with lighter fare tapping into people’s love of Ontario (consistent with the best practices of online campaigning).

The CBC story gave a bit of a pass to Ontario Proud’s spokesperson Jeff Ballingall, noting that he has been a Conservative staffer, but letting him characterize the initiative as a shoestring enterprise organically tapping into grassroots frustration with Liberals.

In fact, Ontario Proud is part of an online network of other “Proud” groups in Saskatchewan, Alberta and B.C., with a growing combined followership of over 165,000 in addition to the Ontario number.

Such networks don’t just emerge without co-ordination — nor do they grow as fast as this without outside investment. These groups have video production capacity, and other spokespeople like Aaron Gunn in B.C., formerly with the Canadian Taxpayers Federation. None of this is accidental.

We are witnessing the application of what some political scientists call “outparty innovation incentives,” where the political side out of power has more motivation (and time) to improve itself so that it can get back into power. The federal Liberals did this in the two years prior to the 2015 election and came back with strong digital and field games. After the election, they openly crowed about their digital advantage over the Conservative party, with election spending disclosures showing that the Liberals invested heavily in digital campaigning.

Preston Manning has been preaching for years the need to invest in the broader conservative movement. Hence, the “Proud” groups joining the ranks of conservative political infrastructure alongside groups like the Manning Centre (training), Fraser Institute (policy) and Rebel Media (communications). These are parts of the conservative ecosystem that supports conservative parties and politicians at the federal, provincial and municipal levels.

There is an active debate, though, about how effective social media like Facebook is in the context of elections — or rather, what it’s effective at. Scholars are still trying to unpack Brexit and the Donald Trump victory to test whether claims about Facebook’s decisive role are true.

There is little doubt that Facebook affords users the ability to “hyper-target” their messaging to specific voters. What we don’t know is whether that includes the capacity to exploit that ability at scale — and whether that messaging actually persuades people.

Here’s what we do know: social media can help find existing supporters relatively cheaply and easily, and then provide the opportunity to do more with them. In the book Engagement Organizing, I outline how digital tools can help campaigns scale up quickly, but to do that successfully, efforts must be made to move supporters offline where they can form relationships and do things like make phone calls or knock on doors — tactics which have been shown to move votes. 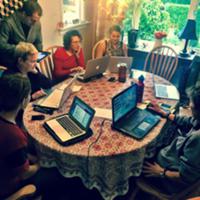 Social media also can help raise money; the federal NDP had much success with online fundraising in 2015, although the party’s post-election debrief noted its failure to get these donors do other helpful things, too.

Ontario Proud is trying to leverage its large Facebook presence to do offline work. Its website runs on the NationBuilder platform, which is an out-of-the-box political organizing system that seamlessly integrates a database with website hosting and with social media and fundraising tools. NationBuilder also will spit out canvassing walks and calling lists. Whether Ontario Proud can actually take advantage of all these tools remains to be seen, but it is successfully taking the first steps.

How should progressive politicians respond? Things are a bit different on the left, due to the split between the Liberals and the NDP which complicates progressive infrastructure building, and due to the longstanding existence of unions and NGOs that already may be filling some of the ecosystem niches. During the Harper majority years, the “outparty innovation incentives” were on the progressive side of the ledger, and we saw increased investments in mobilizing and organizing with unions like Unifor and NGOs like Leadnow.

But progressive political parties and their allies need to understand that parties can no longer afford to take a break between elections. Their opponents are building — and if they hope to keep up, they need to keep building too. Digital innovation is one obvious target for investment, given how fast technology and online organizing changes. But leveraging online communities to work offline is still the way to win.