End of story? Not quite.

The bulk carrier MV Ultra Innovation is carrying minerals from the disputed territories of Western Sahara, which Morocco annexed by a military invasion in 1975.

Some 120,000 Sahrawi people continue to exist in refugee camps 40 years later, while a similar number have endured military occupation behind a 2,700-kilometre berm — the longest fortified structure in the world, bristling with an estimated five million land mines.

The Polisario Front, seeking to create an independent Sahrawi state, fought the Moroccan invasion. A negotiated ceasefire in 1991 included a commitment to a UN-mediated referendum on self-determination. But no such vote has taken place.

Canada does not recognize the government of the Sahrawi Arab Democratic Republic (SADR), which claims sovereignty over their ancestral homeland.

However, some 80 other nations, and the African Union, have recognized the government. Refugees from the conflict swelter in wretched conditions. They watch as the mineral wealth of their homeland is sold to companies in countries willing to do business under such morally compromised conditions — including Canada.

Canada has a laudable record of international leadership on issues like land mines, ozone-depleting chemicals and apartheid.

But when it comes to the festering situation in Western Sahara, Canada is silent.

Nations like Norway and the U.S. have specifically excluded resources and products from the disputed territories of Western Sahara from free-trade agreements with Morocco. Canada is conspicuously silent on the matter as negotiations proceed toward a Free Trade Agreement with the country whose army continues to occupy the region.

In 2010 the national pension plan of Norway divested its investments in companies like Canada’s PotashCorp over the human rights implications of buying phosphate from Western Sahara. Another Norwegian pension fund, KLP, pulled funds from Agrium in 2014 for the same reason, stating such purchases are “deemed to represent an unacceptable risk of contributing to violations of basic ethical norms.”

The Canada Pension Plan Investment Board seems indifferent to such “ethical norms,” investing some $200 million of taxpayers’ money in Agrium and Potash Corp.

Potash Corp and Agrium have received more than $200 million in loans, despite EDC’s vague one-page statement on human rights.

The Crown corporation also hosts a webpage promoting its activities in Morocco, including a map that, despite a cryptic dotted line, shows Western Sahara as part of Moroccan territory where Canadian companies can profit with EDC assistance.

As other nations cease doing business with Western Sahara, Canadian companies are filling the void. According to a 2016 report from Western Sahara Resource Watch, Agrium and Potash Corp now account for approximately 65 per cent of all phosphorus exports from the disputed territories.

Moral issues have obviously not restrained Canadian trade with Western Sahara, but other developments may soon intervene. Several international legal cases challenge the ownership of phosphate cargos being shipped from Western Sahara.

A South African court recently impounded the bulk carrier NM Cherry Blossom, bound for New Zealand, when it stopped to refuel in Port Elizabeth. After 45 days of detention (and counting) a three-judge panel ruled on June 15 at preliminary hearing that:

“Morocco has no claim to sovereignty over Western Sahara... Furthermore, it acquired the territory by force... We conclude that howsoever Morocco’s presence in Western Sahara may be described, it does not exercise sovereignty over the territory.” The judges also noted that the Moroccan state mining company OCP Group “do not claim to have mined the phosphate in Western Sahara with the consent of the people of the territory. They do not and cannot claim to do so on behalf of its people." Most significantly, the judgment found that the Sahrawi Arab Democratic Republic and the Polisario Front had “established on a prima facie basis that... the people of Western Sahara own the cargo.”

The case now proceeds to a full trial in South Africa while the vessel remains at anchor costing the owners $10,000 per day.

The MV Ultra Innovation bound for Vancouver was also detained while passing through the Panama Canal due to a similar court challenge. It was released on bond while the case is appealed to a higher Panamanian court.

No similar case could be brought in Canada because the government does not recognize the Sahrawi Arab Democratic Republic, which therefore has no legal standing.

However in business, risk and time cost money. Legal challenges in other countries are making the business case for buying plundered minerals less timely and more risky.

The SADR raised the stakes for companies like Agrium this week, releasing a statement that puts ship owners and phosphate buyers on notice that they can expect future court actions on cargo in transit.

“The SADR government declares that it will more actively pursue ships, ship owners, and ship charterers by legal measures in liability for the carriage of Western Sahara’s resources… ships which carry the valuable commodity of phosphate rock from occupied Western Sahara will be pursued on a standing basis for legal action,” the statement said. 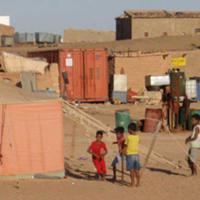 In a separate statement, spokesperson Emhamed Khadad said “the Saharawi people have patiently supported the commitment of the United Nations to a self-determination process in Africa’s last colony. They could no longer give themselves to such a process while remaining indifferent to the rule of law in the international order.”

Recent legal challenges build on an important ruling from the European Union in December 2016 that any free trade agreement with Morocco cannot include the disputed territories of Western Sahara. Morocco responded by threatening to cut trades ties with Europe.

Will Canada risk the ire of Morocco to defend the rights of displaced indigenous peoples in Western Sahara? Ottawa’s silence on Western Sahara during Moroccan free trade negotiations speaks volumes.

Ottawa has expressed a commitment to aboriginal self-determination. Meanwhile the mineral birthright of the Saharawi people is about to be unloaded in the traditional territory of the Squamish First Nation in North Vancouver.

Are these our “sunny ways,” Mr. Trudeau?