Steaming towards Vancouver is a freighter holding almost $10 million of phosphate rock from Western Sahara -- a region that has been militarily occupied by Morocco since 1975. 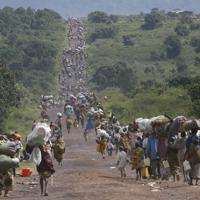 When the load arrives around Oct. 24 at Neptune Bulk Terminals in North Vancouver, it could be the first import of conflict minerals coming directly into Canada since the apartheid era in South Africa.

Plight of the Saharawi people

Calgary-based Agrium is the owner of the 60,000 tonnes of phosphate rock aboard the freighter Ultra Bellambi and has entered into an agreement with Moroccan state-owned company OCP to import one million tonnes each year until 2020. Agrium confirmed to The Tyee that at least some of this material is being sourced from Western Sahara.

Western Sahara has been called Africa's last colony, and has been in limbo since the Spanish withdrew in 1975. The territory is the traditional homeland of the Saharawi people that declared independence in 1976. The Saharawi Arab Democratic Republic (SADR) has since been recognized by more than 80 countries worldwide and is a member of the African Union.

Some 80,000 Moroccan soldiers still occupy two-thirds of the territory behind a 2,400-kilometre sand berm that divides Western Sahara with five million landmines along its length -- the longest fortified structure in the world. No state recognizes Morocco's claim to Western Sahara and the United Nations General Assembly has declared the kingdom's continued presence an illegal occupation.

About half of the entire Saharawi population, totalling 150,000 refugees, live in camps across the border in southwest Algeria. Their home villages were bombed with napalm and white phosphorus by the Moroccan air force in 1976, reportedly killing thousands of civilians. Almost four decades later this diaspora and their descendants continue to endure some of the most inhospitable conditions on the planet.

Summer temperatures often top 50 degrees Celsius and sandstorms and drought are common. Saharawi refugees living in many of the camps have no access to safe or sufficient water, cannot grow their own food and are completely dependent on international aid. Almost half of children below five years of age suffer from acute or chronic lack of nutrition. 47 per cent of women suffer from lack of iron.

The Office of the United Nations High Commissioner for Refugees (UNHCR) describes the health conditions of the refugees as "dire." According to Janak Upadhyay, a senior UNHCR officer who visited the camps:

"Most of the refugees have been there for more than 30 years.... We met children in the camp who were born and raised there. They are children who don't know any better than living in a desert -- dependent on aid, part of a political problem without a solution in sight. It is very sad."

The UN peacekeeping mission MINURSO to resolve the situation in the Western Sahara has been languishing since 1991. With an annual budget of approximately $60 million, it has been criticized for being the only peacekeeping effort in 35 years without a mandate to monitor human rights despite widespread reports of abuses.

Spanish film star Javier Bardem has championed the cause of the Saharawi people and helped create a documentary about their ongoing plight, to be released in theatres this month. The film premiered at the Toronto International Film Festival, and an interview with Bardem was featured on CBC's Q with Jian Ghomeshi. 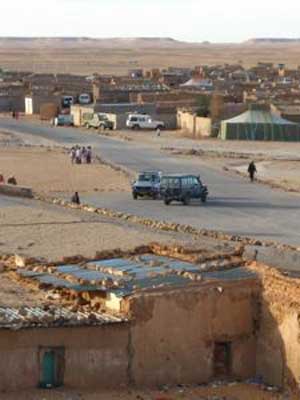 The SADR government in exile has written to Agrium stating:

"The continuing, illegal occupation of Western Sahara is legitimized by individuals and corporations who deal with Morocco for the natural resources of the territory. The conflict over Western Sahara is prolonged, and the Saharawi people denied their economic future, by such engagement.

[We] add that the Saharawi people emphatically do not consent the development and export of their natural resources from the occupied part of their territory. We do not have the benefit of those resources, the revenues from which go to sustain the occupation and to economically and socially support the further in-migration of Moroccan nationals."

Agrium responded that they had "sought and received legal advice under international, Canadian and U.S. law that we are in compliance with the law regarding the importation of phosphate fertilizer from the region in question."

According to Richard Downey, vice-president of investor and corporate relations, "Agrium is committed to improving the quality of life in the communities where we do business, and we believe that our agreement with OCP will support the improvement of economic, environmental and social conditions in these communities."

Law on side of Saharawi

While Agrium considers Western Sahara "disputed" territory, the International Court of Justice disagrees. An opinion from 1975 rejected Morocco's claim to the area, stating:

"The Court's conclusion is that the materials and information presented to it do not establish any tie of territorial sovereignty between the territory of Western Sahara and the Kingdom of Morocco or the Mauritanian entity."

A recent legal opinion from the New York City Bar Association to the UN found "...to the extent Morocco is using natural resources located within the territory of Western Sahara, unless such use is in consultation with and to the direct benefit of the people of Western Sahara, Morocco's use of the natural resources of the territory constitutes a violation of international law."

These potential illegalities are raising issues for investors. According to Peter Chapman, executive director of the shareholder advisory organization SHARE, "If it's not possible to purchase phosphate rock from Western Sahara in a manner that's consistent with international law, then that would be a concern to institutional investors, particularly those investors that believe that the rule of law is important to the long term health of capital markets."

The Council on Ethics for the Norwegian pension fund -- the repository of about $700 billion of the country's oil wealth -- decided in 2010 to divest from two companies because they considered such shipments to be "grossly unethical." This included Canada Potash Corporation, which purchases Western Sahara phosphate from OCP.

Specifically, they stated "this is not only due the fact that the local population is not receiving the benefits; the current manner of exploitation is also contributing to maintaining an unresolved situation and consequently, Morocco's presence in a territory over which it does not have rightful sovereignty. In the view of the Council, there is a concrete, mutually beneficial relationship between OCP's violations of norms and the companies purchasing phosphate from Western Sahara."

This last point is critical. If revenues from the sale of phosphate from the Western Sahara are helping to bankroll Morocco's continued military occupation of SADR, are shipments like those involving Agrium helping to perpetuate the continued plight of Saharawi refugees? The ethical finding from the Norwegian pension fund seems to suggest exactly that.

Will it also exclude Western Sahara, or will the involvement of Canadian-based companies in Western Sahara otherwise influence the outcome of these negotiations?

The Department of Foreign Affairs, Trade and Development highlights the import of phosphate as one of economic benefit for Canada.

150,000 refugees in Western Sahara are watching the unfolding situation closely.