What is the backbone of British Columbia’s economy? Traditionalists might say iconic industries like forestry, agriculture, mining or fishing. Pipeline promoters will probably guess natural gas and fossil fuels make up the lion’s share of provincial wealth generation. Urban dwellers may lean towards the high tech, film and service sectors as our main economic engine.

But these attempts at pinpointing our biggest economic driver? Not even close.

Whether we like it or not, B.C. has basically become a real estate economy. The BC Assessment office recently released numbers for 2017 showing that property values ballooned by a staggering $332 billion — 25 per cent — last year. This figure is more than five times the economic value of all goods-producing industries in 2015 combined and nearly double the size of our entire service sector that same year.

Not surprisingly, 90 per cent of the increased values from last year’s property gold rush were in the urban land bubble in the Lower Mainland, which increased by $298 billion in 2016. Real estate inflation within this tiny area, representing just two per cent of B.C.’s land area, eclipsed the entire provincial GDP — the actual goods and services produced by all British Columbians in 2015.

But is this real estate wealth actually real? As documented in a previous article, Vancouver is rapidly becoming a global hedge city much like New York or London — a magnet for the world’s wealthiest to stash their cash in residential property, providing a windfall for some while obliterating local affordability.

Decades of public policy essentially selling Canadian citizenship to offshore investors, coupled with shockingly lax transparency requirements around beneficial ownership, mean that Canada is now a premier destination for dubious global lucre. Professor David Ley detailed this dismal transformation during a public lecture at Simon Fraser University last September outlining how the Immigrant Investor Program (still active in Quebec) attracted some 200,000 millionaires to the Lower Mainland while leading to the lowest declared incomes of any immigration stream, “lower even than refugees.”

According to the Globe and Mail, these commercial operations are often advertised on Chinese language websites offering services for offshore visitors including:

Two such operations investigated in the past by the City of Richmond for bylaw violations are owned by local businessman Miaofei Pan, who hosted Prime Minister Justin Trudeau at his mansion for a Liberal Party cash-for-access event in November. Small world.

During this event, Pan reportedly urged Trudeau to further open the floodgates for offshore real estate speculation, citing two massive Chinese property firms displeased with pesky Canadian restrictions. “They both have the willingness to invest here,” Pan told the Globe and Mail. “Some of their deputies have immigrated to Canada. But for a long time, they have not found good projects to invest in. I was thinking [Canada needs policies] that can attract investments and help expand investments.”

Ironically, housing affordability is an oft-repeated policy goal of all levels of government. Recent reports illustrate what an utter failure these efforts have been. An annual international survey shows that Vancouver remains the third least affordable city on the planet with “the greatest housing affordability deterioration” anywhere on Earth in 2016. According to Demographia, Vancouver house prices rose last year by the equivalent of an average household income. In other words, if your family is lucky enough to own land, it might have made more money than you did last year.

Something has to give. Increasingly, it is the tolerance of local residents that is waning. Figures from the same report showed that in spite of the relentless hype that Vancouver is the best city the world, more people actually moved out of Vancouver last year than those who moved in. The bona fide world-class destination of Paris is dealing with a similar exodus, losing over 13,000 residents between 2009 and 2014 — a trend blamed on Airbnb, which local politicians have called a “catastrophe” for the City of Light. 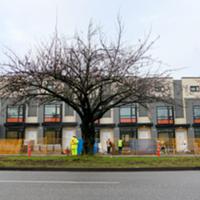 As they say in business, there is no free lunch. Becoming a global magnet for billionaires, oligarchs and money launderers can mean displacing the creative class that breathes life into any community.

Internationally renowned furniture maker and designer Niels Bendtsen has based his business in Vancouver since 1963. Soaring property assessments of his warehouse and manufacturing buildings in the Downtown Eastside may soon drive him to Toronto. His two buildings are apparently worth three times what they were a year ago and his collective tax bill will climb to over $320,000 in 2017 — a crushing increase of nearly 150 per cent.

Of course, those more marginalized have far greater challenges than escalating taxes. One enterprising homeless man built a heated “coffin-like” crate he wheels around to wherever he can plug into a public outlet. Amid the daily fentanyl carnage of Canada’s most conspicuously consumptive city, a sickening disparity of wealth yawns ever wider.

Call me old fashioned, but perhaps the priorities of a city should be people rather than property. The entire economic output of the province should not be eclipsed by mere real estate speculation.

Vancouver seems on course to become a global hedge city largely reserved for the world’s wealthiest (or at least their empty luxury properties). Is this the country we want? What will Vancouver look like 10 years from now? The foreign buyer tax may have cooled the local land rush from thermonuclear to merely volcanic. Much more obviously needs to be done, lest this town become a Potemkin village for plutocrats.

Story corrected Jan. 30 at 9:05 a.m. to include additional information on Richmond council's position on short-term rentals.