Premier Christy Clark recently announced she will no longer be taking the $50,000 top-up to her salary funded by BC Liberal Party donations. She has been criticized for this privately funded bonus for well over a year. So I’m curious: why has Clark made this move now? 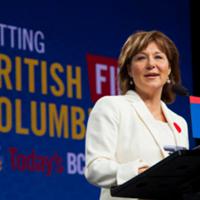 Premier Clark Gives Up Her BC Liberal Stipend, but Questions Remain

Did you hear about how Premier Clark’s party salary bonus is an example of B.C.’s anything-goes, “wild west” political climate? It was in the New York Times! They pointed out that our special brand of campaign financing is mostly illegal anywhere else in Canada. In the Times. The New York one!

The Neil Patrick Harris remarks were big news in Vancouver — TV stations and newspapers picked them up and repeated them, just as they do whenever the Economist uses its mysterious and inscrutable criteria to declare Vancouver one of the world’s most liveable cities. We eat that shit right up.

Likewise, when Clark’s sketchy pay packet caught the eye of the Grey Lady, that reporting was reported locally as a news story in itself. And at long last our premier discovered a sense of shame. Never mind that The Tyee has been harping on the issue for awhile — The Tyee is always prattling on about something because we hate freedom. Never mind that other B.C. media have been reporting on the controversy — that’s minor league ball. But the New York Times? Awkward.

The premier’s dubious income supplement, the lack of limits on B.C. political donations, and the fact that our conflict of interest commissioner seems to have a conflict of interest all combined in the Times story to make us look backward in the big smoke. And you know what they say: If you can look like a sleaze there, you look like a sleaze anywhere. Courtesy of the Times’ tree of knowledge, Premier Clark bit into the Big Apple and at last saw her nakedness. Cue the belated embarrassment.

Why so late to enlightenment? The unkind might suggest that Premier Clark does not choose between corn flakes or a breakfast omelette without first considering the optics.

What Gertrude Stein said of Oakland might also be said of Clark’s core beliefs: “There isn’t any ‘there’ there.” It’s all about appearances. With the election coming, it is time to clear out all the possible fire hazards. A scandal with the imprimatur of the New York Times is a scandal that must at least appear as though it has been dealt with — in this case by no longer taking the money as salary but using it for expenses instead.

A conspiracy theorist could easily come up with an overarching theme for Clark’s private pay scheme. Liquefied natural gas development has long been a key plank of the BC Liberal platform. Such development could play a role in global warming. Global warming will certainly affect the future of B.C. agriculture. So why not prepare for the new crops by turning B.C. into a political banana republic? Maybe we’ll get the giant spiders too.

Meanwhile, the rest of our dystopian future seems to include a collapse of traditional journalism. Newspapers are shedding staff in numbers large enough to challenge even the vivid imagination of Trump’s unfortunate new press secretary Sean Spicer. Could it be that someday soon the list of financially solvent print media will contain only the Washington Post, the New York Times, and maybe the Buzzer? Will we in far-off British Columbia come to depend on American media institutions for all of our breaking news? If sometime in the not-so-distant future Premier Clark begins wearing a very tall hat and selling indulgences, and the New York Times is too busy reporting on President Trump’s plan to turn abortion clinics into prisons and make Planned Parenthood pay for it, will anyone in B.C. notice?

At any rate, we can console ourselves with this: Neil Patrick Harris likes us. He really, really likes us.