Professional political punditry lies in ruins after one of the greatest electoral upsets in history. What happened? In fairness to the prognosticators, never before has “open source reality” been so important to how people view the world, and the implications for democracy are dire.

Reality is hard, and arguably getting harder. People seek shelter in addictive distractions such as social media that provide a customized experience consistent with what we already like and how we expect things to be. In the flurry of post-election commentary, a recent piece illustrates the siloized worldview created by social platforms like Facebook — now the largest disseminator of current affairs in the world.

The Wall Street Journal created two accounts for a hypothetical Democrat and a Republican and ran their news feeds side by side. It is little wonder America is so divided.

The Democrat feed looks much like my own, with left-leaning news, updates on the Standing Rock protest and post-election demonstrations against Donald Trump.

The Republican feed looks at the same world and sees another planet:   “Innocent Father To 4 Dies Because Of Reckless Anti-Trump Protestors”

Hillary Clinton was in a psychotic drunken rage on election night and had to be restrained.

“George Soros Exposed In Attempt To Bring Down Donald Trump In Sickening Plot.”

Both left and right “realities” are mathematically crafted by a proprietary algorithm that pulls in astronomical ad-generated profits for Facebook’s shareholders — including founder Mark Zuckerberg currently worth some $54 billion USD.

Back in the real world there are dire consequences to this social media myopia. For one thing, Facebook and Google have laid waste to actual news organizations by dominating 85 per cent on online ad revenues. Thousands of professional reporters have lost their jobs producing actual news while the voting public is instead inundated with targeted, hyperbolic clickbait.

These personal echo chambers keep people in perpetual agitation while offering the comfort of commonly held values. Remember that scene in Marathon Man with the dental pick and clove oil? Facebook is kind of like that. If people are only exposed to news and opinion they already accept, reality is that much easier to deal with — no messy learning or empathy for the other required. We stumble through the real world obscured by our personal VR goggles, oblivious to the damage we inflict on each other, the planet and ourselves.

For instance, Zuckerberg likely doesn’t want to face the fact that the Facebook-mediated election of Donald Trump may have climate consequences that are catastrophic.

Trump recently named Myron Ebell to lead the transition team for the Environmental Protection Agency — an incredible choice given that Ebell is a long-time and unabashed foe of the scientific consensus around climate change. As director of the fossil-fuel-funded Cooler Heads Coalition, his group’s work on “dispelling the myths of global warming” surely bears some of the blame for the stunning reversal of public opinion in the U.S. in the previous decade about the urgency of tackling carbon emissions.

To put a professional provocateur in charge of the agency he has opposed for decades seems audacious even for Donald Trump. Put another way, there are only two basic attributes required of an airline pilot: 1) they know how to fly, and 2) they don’t want the plane to crash. Ebell apparently possesses neither in his new capacity regarding the EPA. As a non-scientist, he is unqualified to appreciate just how dangerous his work has been. As a well-paid mouthpiece for the fossil fuel sector, he is unlikely to care.

Reality is getting real

While Republicans might cheer such in-your-face affronts to their political foes, reality is about to get a lot more real for all of us whether we are ready or not. Mounting carbon levels in the atmosphere are indifferent to Donald Trump’s opinions about the laws of physics. Simplistic slogans and red baseball hats will not stop the march to automation decimating working-class jobs far faster than international trade deals.

Tea Party Republicans who cast themselves as righteous outsiders are now in charge of every aspect of the political sausage factory and will soon have no one else to blame for the inherently messy outcomes. Donald Trump himself has the look of someone who plays a doctor on television and has just been hustled into an operating theatre and handed a scalpel.

The political left has its own reality crisis to deal with. The complete failure to respectfully connect with working-class rural allies was on dismal display with Trump’s unlikely victory. The remarkable mismatch between Hillary Clinton’s career elitism and the enraged American zeitgeist could only have been overlooked within the ivory tower of the Democratic Party.

Likewise urban liberals have fixated on splintering semantics into ever-tinier weaponized shards, each meant to demonstrate our individual correctness rather than seeking out much more difficult dialogues with people outside our class or culture. Re-posting progressive polemics might feel righteous, but it obviously didn’t cut much ice with the traditional Democratic base on Nov. 8.

It’s ironic that urban hipsters fetishize the white working class with such affectations as beard oil and designer axes (complete with a 24-page owners manual). Meanwhile in the rustbelt, another reality bubble isolates people within a shared suspicion of everything urban, diverse and “progressive.” 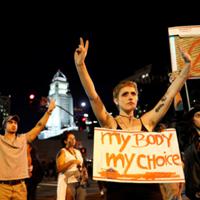 The End of Growth and the Rise of Trump

How do we get out of this mess? Let’s start with an acceptance that reality is hard, exhausting and increasingly overwhelming. Many crave the constrained perspective of staring down a soda straw. For his supporters, Donald Trump is that straw, offering a tiny comforting vista free of facts, complications and nuance. Millions yearn for his reassuring message of rust belt renaissance, further evidenced by how utterly implausible it is coming from such a career capitalist predator.

We also need to recognize that Facebook is not a news outlet; it is a business worth billions. Our continued online attention is what they are selling to advertisers, and everything on your news feed is designed to keep you there for the next 30 seconds. Turn it off or cancel your account. It is deepening the divide.

Finally, our reality problem is not going to go away — it is going to get worse. Inbound technological automation is going to eliminate millions more jobs and will soon start chipping into the professional class now so disdainful of displaced factory workers. Wouldn’t you rather deal with an efficient and inexpensive robot lawyer than a real one? The future is coming, even for the urban elite.

Beyond the noise of Hillary’s emails and Trump’s excesses we have a much more philosophical issue to grapple with. Since the industrial revolution, people have largely been valued by their capacity for productive work. As capitalism requires fewer and humans, what are the displaced multitudes to do? What could this economy and society look like? What will be a life well lived beyond the age of wage labour?

American poet Wendell Berry posed the weighty question “What Are People For?” In the Old Testament, Jacob spent a long and fateful night wrestling with God until the light of dawn. There are fundamental questions we all need to grapple within our shared reality and common future, not our Facebook feeds.