Public transit costs too much. Cyclists need to get out of the way. We should build more roads. That seems to be the takeaway from the failed transit referendum in Metro Vancouver, where even voters living in the city rejected a 0.5 per cent sales tax increase to build badly needed transit infrastructure. But if transport decisions are really only about money, why not go all the way down the free-market rabbit hole? What about all that pricey urban land area devoted to cars? 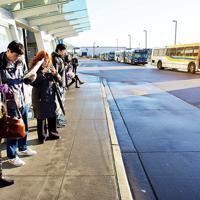 Even Vancouver Said No to $7.5B Transit Plebiscite

Vancouver has the second most valuable real estate in the world. Average land values are around $150 per square foot, or $16 million per hectare. The total area is almost 12,000 hectares, of which 2,997 hectares or 26 per cent is roads, streets and alleys. Doing the math, all that automobile asphalt adds up to $48 billion in stranded real estate for which the city realizes no tax revenue beyond parking fees.

The downtown core is roughly 375 hectares of some of the priciest property on the planet. Assuming similar land use patterns to the rest of the city, about 97 hectares of this is dedicated to drivers. Land values here typically top $500 per square foot, which works out to about $53 million per hectare. This means that cars in our urban core enjoy over $5 billion in gratis public real estate. This does not include over 5,000 off-street parking spots -- many of which are also owned by the city.

Meanwhile, transit can move people using 1/20th the amount of road space and does not require downtown parking. Road maintenance is also not free, costing Vancouver taxpayers $23 million each year, whether they drive or not.

The amount of car-related real estate increases sharply moving from the city to the suburbs. Surrey has over twice as much land area devoted to roads as Vancouver and three times more on a per capita basis. Obviously cities need roads to move around goods and people (including those using public transit), but the road-bloat in places like Surrey shows how egregiously over-resourced cars have become in some of our communities.

Driving rates are also plunging here, with less than half of 20 to 24 year olds living in Vancouver choosing to get a driver's licence -- down from 61 per cent in 2004. Such numbers are apparently unavailable to provincial decision makers engaged in a binge of road building while neglecting investments in public transit.

No vote on these boondoggles

Of course, expanding our car-based infrastructure rarely requires a referendum to spend billions in taxpayer money. The Port Mann Bridge replacement enjoyed $2.5 billion in public money at the stroke of a premier's pen. The project was allegedly planned to repay the province through road tolls on additional drivers. However, what is now the widest sprawl-supporting bridge in the world currently sees less traffic than the old bridge it replaced, soaking taxpayers for $80 million in unrecovered costs last year.

Likewise, the new Golden Ears Bridge has become an expensive boondoggle. Costing more than $800 million (some $200 million over budget), the annual toll revenue is $38 million less than what the taxpayer is contractually required to pay our "private partner." Together, these two bridges are costing British Columbians $120 million each year -- about half of the revenue that would have been raised through the new transit levy.

The George Massey Tunnel is being ripped up for no apparent good reason other than to allow coal barges and liquefied natural gas tankers to cart away our resources and worsen climate change. The tunnel is still structurally sound and has many decades of useful life. However, those in Victoria's political Star Chamber have instead deemed it disposable, to be replaced by a $3-billion bridge, apparently made taller and more expensive so tankers can make risky transits through Canada's third largest city. Again, no contentious voter consultation required.

What if the city started thinking like a business? That $48 billion in land area devoted largely to single occupancy vehicles might be put to more profitable use instead of worsening our unfolding climate catastrophe. Land values in the Lower Mainland have punched through the stratosphere, so why not reclaim some of this area for the use of people rather than personal vehicles? Perhaps we should let the market decide the best use of this land if cars can't pay the bills.

Any honest free-marketer should concede that drivers have been feasting on a taxpayer-funded free lunch for decades. And if this massive urban land area is to remain dedicated for driving, it seems only reasonable the city should realize a modest return on investment of 10 per cent based on road pricing and increased parking fees. This would mean drivers would be on the hook for some $5 billion annually. How does that sound?

Of course, most drivers' blood boils at the mere mention of marginal increases to gas prices, road tolls or user fees. But why is that so outlandish? The precedent set by the transit referendum is that transportation tax dollars should not be spent without the express consent of taxpayers. So why should cars continue to get a free ride with no questions asked?

No one asked me if I wanted to pony up for the $1.2-billion South Fraser Perimeter Road. Or how about the Sea to Sky highway upgrade? Almost $800 million in public money was spent to widen a road to a ski resort for a two-week sporting event. I suppose no one considered upgrading the perfectly good rail line right beside the highway...

Deciding how best to spend scarce public money on urban transport options is not easy, but devoting public dollars to personal vehicles should no longer be the discussion-free default. Those promoting costly, inefficient and climate-destroying infrastructure should have to defend their positions just like those promoting public transit. So why doesn't this happen? Because in a fair and fact-based debate, drivers would likely lose every time.