The Canadian government's environmental assessors are done examining the Petronas-led liquefied natural gas development proposed for the mouth of the Skeena River in British Columbia. If Premier Christy Clark is celebrating, she should think twice.

Actually, Clark and Petronas and the feds, they should all think several times -- not just twice -- because there are myriad ways in which the Canadian Environmental Assessment Authority's process has failed the sniff test when it comes to science, Indigenous consultation and fair process.

On the line: Just B.C.'s richest salmon grounds and whether or not Justin Trudeau was honest in his campaign to replace Stephen Harper.

On Friday night, the public comment period on CEAA's draft report, which gave a preliminary thumbs up to the $36-billion development, was closed. A scroll through the comments section on CEEA's website, where 2,741 posts were lodged by the deadline, doesn't reveal much more than that people who work in the oil and gas industry want the project to go ahead, and a lot of other people don't. It is a clumsy, unedifying way to survey public opinion, and all it really does is prove the old adage that opinions are like assholes: everybody's got one.

It certainly doesn't remove the stench from a major project review process that Stephen Harper's government corrupted in 2012 with revisions to the federal environmental assessment act that turned it into a rubber stamp for industry. That overreach on the part of the Tories is now coming back to haunt Petronas and the Clark government, in part because the federal Liberals campaigned on a pledge to bring trust back into the environmental assessment process -- and to listen to what communities, particularly First Nations, have to say.

To recall the Liberal platform, ''We will make environmental assessments credible again. While governments grant permits for resource development, only communities can grant permission.'' (Emphasis added.)

''Restore robust oversight and thorough environmental assessments of areas under federal jurisdiction, while also working with provinces and territories to avoid duplication;

''Ensure that decisions are based on science, facts, and evidence, and serve the public's interest;

''Provide ways for Canadians to express their views and opportunities for experts to meaningfully participate; and

The report, now ticking away on the minister's desk, meets only one of those criteria. If accepted, it would ''help get resources to market.'' Through no fault of the current government in Ottawa, it is now in possession of a report that gives the minister absolutely no basis upon which to make an informed and principled decision about the Pacific NorthWest LNG project.

In theory, Minister McKenna now has until March 22 to make a decision. In practice, she should stay her hand.

If she does not, the federal government can expect two things: several legal challenges to a decision-making process that it inherited and that it concedes is fundamentally flawed, and a public backlash that will put paid any lingering pretence that the PM can deliver on a new relationship with Indigenous people in Canada that he has mandated himself to oversee. 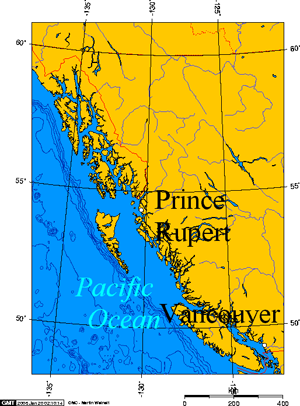 If the government puts the Petronas project on ice, the company will probably walk. The Financial Post reported a few days ago that Malaysia's state-owned oil company ''has threatened to walk away if it doesn't get federal approval by March 31, according to a source close to the project.''

If the project is approved, Petronas plans to build a pipeline to bring gas from the fracking fields of northeastern B.C., terminating at an $11.4-billion gas hub and export terminal at the mouth of Canada's second-largest salmon river. The CEEA says the project will pose risks to a few harbour porpoises but dismisses claims it poses immitigable risks to wild salmon habitat in the Skeena estuary.

It will also add a whopping 20 per cent to the provincial tally of greenhouse gas (GHG) emissions, which should be reason enough to stop the project right there since both the federal and provincial governments claim to be trying to reduce GHG emissions post-Paris.

What about these scientists?

If that's not enough to kill the project, then you would think the opinions of more than 130 leading Canadian and international scientists would carry some weight with a government that seeks ''science, facts and evidence'' in order to determine the public interest.

Earlier this week, a letter was delivered to McKenna and copied to the PM that refuted the CEEA findings as unscientific and biased towards conclusions by consultants paid for by the proponent.

And apparently it's not just science that companies with a vested interest in greenlighting LNG are prepared to pay for. It also emerged that the Conference Board of Canada -- whose very name would seem to imply sobriety and independence -- took money from gas driller Progress Energy Canada, a subsidiary of Petronas, to pay for a study that promised a ''huge lift'' for B.C.'s treasury if the project goes ahead.

''Although the current global crude oil price downturn has cast a shadow over LNG markets (with LNG typically priced relative to crude oil), the outlook remains positive,'' the authors concluded, something not even Petronas would claim with a straight face. It's amazing what money can buy, though: wishful thinking, all wrapped up in a handsomely designed report called ''A Changing Tide.'' On none of its 70 pages does it consider any potential environmental costs of LNG. It is a dismally one-sided account of the dismal science, which aligns perfectly with CEEA's equally imbalanced approach to ecosystem science.

Without getting too lost in the eelgrass here, the letter, in which dozens of independent scientists warn McKenna off her department's own report, says CEEA's findings:

Misrepresent the importance of the project area to fish populations, especially salmon;

Make flawed assumptions based on an absence of information;

Disregard independent science in favour of science commissioned by the proponent;

Inadequately consider multiple impacts and their cumulative effects; and

Rely on unsubstantiated assessments of potential mitigation of habitat damage.

Go back to start

In posting its initial findings a month ago, CEAA appended an earlier statement by McKenna and Natural Resources Minister Jim Carr outlining new principles that are ''the first part of a broader strategy to review and restore confidence in Canada's environmental assessment process.''

The first of these principles is that ''no project proponent will be asked to return to the starting line.'' In the case of the Petronas project, that principle should not and cannot hold. Why? Because of the second principle, which is that ''decisions will be made on science, traditional knowledge of Indigenous peoples and other relevant evidence.''

It's true the principle doesn't explicitly demand that a decision be based on good science, but leaving that aside for a moment, what about the traditional knowledge of Indigenous peoples?

It was notable that when Christy Clark led a massive, and no doubt massively expensive, delegation to Ottawa last month to press the federal Liberals into approving Petronas and turning a blind eye to Site C, she draped herself in a shawl sporting a First Nations motif. It's nice symbolism for her to dress the part of someone who has aboriginal interests at heart, along with some added window dressing provided by a few chiefs who are along for the LNG ride. 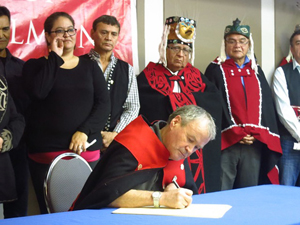 But pause to remember that last year, to a person, the Lax Kw'alaams nation rejected the project -- even when more than $1 billion in benefits were waved under their noses -- because their traditional knowledge, not to mention plain common sense, told them Lelu Island is the last place in the province where you would put an LNG gas plant. How hard is that for government and industry to understand?

At the Salmon Nation Summit held in Prince Rupert in January -- the one that triggered the Premier's Sarah Palinesque outburst about the ''forces of no'' -- some of the signatories to the Lelu Island Declaration calling for a halt to Petronas's plans were hereditary chiefs and other members of the Gitxsan, Wet'suwet'en and Gitanyow First Nations. These upriver tribes depend on the health of wild Skeena salmon as much as anyone and they were not consulted about the Petronas project.

The federal government can't wriggle off that fact any more than it can claim its science is credible or that an independent economic analysis weighing benefits and risks has been performed in such a way as to have the confidence of the people who stand to lose the most -- and if history is any guide -- gain the least from a bad project in the wrong place.

Examples of a better approach

To gain not just community confidence but also business certainty in the resource sector, Minister McKenna need look no farther than to two made-in-B.C. processes that have already achieved a large measure of both.

The other was celebrated just a few weeks ago: the Coast Information Team that finally came up with a workable land-use plan for the Great Bear Rainforest.

The Skeena, besieged with more than $100 billion in piecemeal development proposals, deserves nothing less than a similarly constituted, independent, and respected panel to study all the environmental, social, and economic implications of our provincial government's plunderous northern gas rush. Our federal government needs a safety valve and a way forward, and it has the power -- it has the mandate -- to order up just such a process, and it should.

Sarah Palin was once ridiculed for saying she could see Russia from her house in Alaska. From her home in British Columbia, Christy Clark can apparently see China's hungry energy markets and Malaysia's petro-dollars. What she seems incapable of seeing is just how ridiculous -- and doomed -- her LNG fantasy has become at home.

Minister McKenna? Don't be so easily fooled. Stick to your mandate. Preserve your PM's credibility. And step away from this vehicle. It belongs to Stephen Harper and it's ready to explode.