"These breeds [pit bulls] should be regulated in the same way in which other dangerous species, such as leopards, are regulated." -- Annals of Surgery medical journal, April 2011 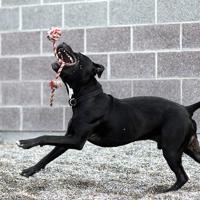 Enough with Attacks, BC Must Ban Pit Bulls

Despite a horrific pit bull attack that left a New Westminster woman with "life changing" facial injuries and a man also bitten, the city has "no plans" to reinstate a bylaw restricting vicious dog breeds that it repealed in 2013.

The New Westminster attack July 23 sent the woman to hospital with serious injuries while the dog was seized and is being held by New Westminster Animal Control Services.

Two children asleep in the apartment were unharmed.

"No matter how good they [pit bulls] can be, they can change on a dime. They are like walking sharks," Lori Hilton, a neighbour of the New Westminster attack victims told CBC.

The attack is the latest of several pit bull and pit bull mix incidents causing serious injuries in B.C. and resulting in the deaths of several smaller dogs.

In June, a nine-year-old Penticton girl was the victim of an unprovoked pit bull attack, requiring five stitches on her arm, which she used to protect herself when the dog lunged for her face.

But New Westminster Animal Control Services supervisor James Doan said after a bylaw review the city removed the "breed specific" rules on pit bulls. Those regulations had demanded muzzles, leashes and other restrictions on several breeds.

"Any dog can have an incident," Doan told The Tyee on Friday.

And New Westminster communications coordinator Ashleigh Young told The Tyee that: "There are no plans to amend the bylaw at this time."

While New Westminster repealed its restrictions, Burnaby continues to define pit bull breeds as "vicious dogs" that must be muzzled in public and in 2013 increased licensing fees for them and fines for incidents.

That's despite strong efforts of pit bull advocates to have the bylaw pulled.

"I'll call it the vocal minority that's been addressing us, writing to us, again, as I said, passionate about their pit bull dog," Calendino said. "But we have a very silent majority out there that is in support of what the council is doing and they want us to not change our mind about... restraining vicious dogs in the public."

Ontario, which banned pit bulls altogether in 2005, has reported significant drops in dog bite attacks since then, while Winnipeg has prohibited the breed since 1990.

Just looking at recent news reports on pit bull attacks shows why a ban is necessary.

This year alone in the United States, 14 people have already been killed in pit bull attacks -- including seven children and infants.

The Tyee covered an unprovoked pit bull attack on a six-year-old Vancouver girl in Crab Park in January that required 10 stitches to her leg and another four to her face.

In Calgary in May there were five dog attacks in five days connected to pit bulls, with one teenage girl sent to hospital.

And small dogs are often killed by pit bull attacks. In Nanaimo in June, a woman's 13-year-old Maltese-poodle cross died after a pit bull crushed its throat while the owner walked her dog on Hecate Street.

Mia Johnson knows all too well how a sudden, unprovoked pit bull attack can take the life of a cherished dog.

Johnson and her daughter Laurel lost their service dog Yuri, a miniature pinscher, in Vancouver last November -- and no charges were laid against the owner of the pit bull that disemboweled Yuri.

Johnson has strong opinions about how New Westminster was convinced to drop its vicious dog rules by a group called HugABull Advocacy and Rescue Society.

"HugABull pressured New Westminster City Council to drop the pit bull ban by calling it 'antiquated legislation' and telling people the 'trend is towards repealing BSL [breed specific legislation].' Both are entirely untrue," Johnson said in an email interview with The Tyee.

"In the last three years, an additional 160 cities in the United States adopted BSL policies to protect their citizens from pit bulls. This was despite the fact that Best Friends Animal Society, the largest American pit bull lobby group who earned $66.6 million dollars in 2014 relentlessly campaigned against BSL during this time."

"Pit bull advocacy groups have a strong economic interest in not banning pit bulls, and people in cities like New Westminster suffer the consequences," Johnson concluded.

Pit bull supporters continually argue that the owner, not the breed, is the problem.

Unfortunately, that's just not what the evidence shows, nor does it take into account that pit bulls have been bred for centuries as fighting dogs.

And many of the child fatalities are the result of the family pit bull suddenly savaging a youngster in their own home.

In April, 10-week old Brayden Wilson was killed by a pit bull when his father briefly stepped outside to turn on a lawn sprinkler.

When he returned, his pit bull was attacking Brayden in his bouncing seat. The father tried to pull the dog off the infant and was then joined by Brayden's mother, who was bitten twice.

The father finally managed to pull the dog outside and shot it but Brayden was pronounced dead at hospital.

Brayden's grandmother Willetta Tate said the family owned the pit bull for eight years, during which it had been around two other children in the household, eight and 11 years old.

"It's just unexplainable. You just don't get it when you've had the dog so long, I don't know what could have happened. I don't know," Tate said. "Those kids, they sleep with him and everything."

Time to ban the breed

"Bites from pit bulls inflict much more damage -- multiple deep bites and ripping of flesh -- and are unlike any other domestic animal I've encountered," Tucson plastic surgeon Dr. Christopher Demas testified in a Colorado court. "Their bites are devastating -- close to what a wildcat or shark would do."

Owners are rarely charged when their pit bulls kill or injure, and not all dogs involved in attacks on humans and other animals are put down.

There were no charges in either the Vancouver or Nanaimo cases this year.

But even if there are charges, they come after an attack -- the only way to prevent those fatalities and injuries is with a ban.

That's why New Westminster City Council should reconsider its 2013 decision to repeal their vicious dog bylaw and put greater emphasis on the protection of citizens than the right to own a pit bull.

And it's why British Columbia should simply ban pit bulls.