"How do I go from a birth certificate to a death certificate? ... Those dogs cannot be domesticated. They cannot." -- Jeremiah Rutledge, father of two-year-old son Beau, killed by family pit bull, April 2013, Fulton County, Georgia. 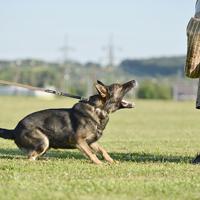 A 16-day-old baby is viciously attacked in her own Saanich home by the family dog, suffering serious lacerations requiring extensive plastic surgery.

A six-foot five-inches man weighing 250 pounds is mauled by two dogs outside a Langley store, requiring 19 stitches, after saying "Hi, pups" to the pair tied to a mountain bike, which they dragged behind them to get at their target.

A miniature pinscher therapy dog is literally disemboweled in front of its shocked owner outside a Kitsilano post office by a sudden, unprovoked attack by another dog.

The common element? The attackers were all pit bulls. And these three reported B.C. incidents happened in only the last two months.

In the United States, statistics show that 25 people were killed by pit bull attacks in 2013 alone, including 18 children -- that's 78 per cent of all fatal dog bite deaths even though pit bulls make up roughly six per cent of all U.S. dogs.

The non-profit DogBites.org tracks fatal attacks and reports that between 2005 and 2013, pit bulls killed an astonishing 176 Americans -- or one every 19 days -- representing 62 per cent of all dog bite deaths. Rottweilers, another fighting/guard dog, killed 33 in the same period, for a combined total of 74 per cent.

The website chronicles each human death in horrifying, sourced stories with details about the dog involved.

It's time British Columbia followed the lead of Ontario and Winnipeg and banned pit bull breeds here as well, for the safety of us all.

Bring on the howls

You can hear howls of outrage from pit bull owners already. They will say it is "bad" owners, not bad dogs; that other dogs also attack and kill; and that breed bans don't work. Defending pit bulls is a major industry.

Yes, irresponsible owners help create monstrous dogs intended solely to fight and maim, but family "pets" have also killed at home. Yes, other dogs sometimes fatally bite, but not anywhere near as often as pit bulls. And breed bans actually do work.

In Ontario, pit bulls have been banned since 2005: no breeding or importation; existing pit bulls must be neutered; and if walked in public they must be leashed and muzzled.

Winnipeg stats tell the same story: severe dog bites are down since pit bulls were banned in 1990.

B.C. should ban pit bulls too, because continuing to whine about bad owners, not bad dogs, and doing nothing didn't save a baby, a man or a therapy dog from vicious pit bull attacks -- only a ban will.