"Once you legalize something, you normalize it. When you normalize it, the message is that it's safe and marijuana is not safe for young people." -- Conservative Health Minister Rona Ambrose 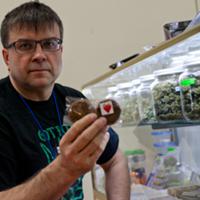 It's time to use common sense on the medicinal marijuana business that is growing wild in Vancouver -- not a dose of reefer madness.

Unfortunately, the federal Conservative government demands an ideological approach that ignores reality while trying to score political points with its right-wing base in an election year.

But even some Conservative voters can't be happy with this ham-handed approach to marijuana -- or Ambrose's obvious attempt to paint the opposition as drug fiends pushing dope to kids.

Fortunately, Vancouver council is taking a more sensible course by proposing regulations for the 80 medicinal marijuana dispensaries that have sprung up since the federal government in 2014 banned the cultivation of pot by patients with a prescription.

The proposed city regulations -- including a steep $30,000 annual licensing fee and staying at least 300 metres away from schools, community centres and other dispensaries -- ensure some reasonable level of responsibility instead of chaos.

The issue of decriminalization or legalization of marijuana is anathema to Prime Minister Stephen Harper's Conservatives but an Angus Reid poll last year found 59 per cent of Canadians and 70 per cent of British Columbians backed legalization.

Even 43 per cent of Conservative voters agreed.

However, Ambrose doesn't care about the majority who favour ending the criminal prohibition on marijuana that has clearly failed to curb appetite for the drug -- whether for medicinal or recreational purposes.

"I would not support a Justin Trudeau Canada, where what's happening in downtown Vancouver [is repeated elsewhere] where pot dispensaries are opening up on corners. They are not regulated. Pot is illegal right now, unless you are through the medical marijuana program of Health Canada," Ambrose told CBC Radio host Stephen Quinn on Friday.

Tagging Liberal leader Trudeau (who supports legalization) or New Democrat leader Tom Mulcair (who backs decriminalization) as the problem insults voters' intelligence -- and their desire for a sensible solution.

And with both Washington State and Colorado recently voting to legalize marijuana, even a Conservative cabinet minister should be able to tell which way the weed wind is blowing.

In fact, federal Justice Minister Peter MacKay publicly suggested last August that the government might turn personal pot possession into a ticketed offence instead of a crime where even possession of less than 30 grams can lead to a six-month prison sentence.

And ironically given the easy access to medical marijuana in Vancouver, eight B.C. men have been ordered extradited to the United States to face serious marijuana smuggling charges for allegedly shipping hundreds of kilos to California.

So let's be blunt about blunts -- marijuana will be consumed by a significant portion of the Canadian population regardless of the laws.

And while it has demonstrable health benefits for some patients -- those suffering from cancer, glaucoma, nausea and other illnesses -- it can also be unhealthy, particularly when smoked or used in excess.

The obvious answer is to look at the facts, not fuel the fiction.

Dr. Sanjay Gupta, a neurosurgeon and CNN's chief medical correspondent, is one of those who has taken a second look at his opposition to medical marijuana and changed his mind.

"I mistakenly believed the Drug Enforcement Agency listed marijuana as a schedule one substance because of sound scientific proof. Surely, they must have quality reasoning as to why marijuana is in the category of the most dangerous drugs that have 'no accepted medicinal use and a high potential for abuse,'" Sanjay wrote in 2013.

"They didn't have the science to support that claim, and I now know that when it comes to marijuana neither of those things are true. It doesn't have a high potential for abuse, and there are very legitimate medical applications."

Sanjay remains opposed to young people having access to marijuana, citing studies that suggest early use can harm the brain. But unlike Ambrose, Sanjay doesn't use that as a scare tactic for a total ban.

"We have been terribly and systematically misled for nearly 70 years in the United States, and I apologize for my own role in that," Sanjay concluded.

"Until today, our system has been completely unregulated," Inslee said. "Today, after tremendous hard work and compromise by legislators on both sides of the aisle, I signed a bill that will create a medical marijuana system that works for Washington."

So Vancouver Mayor Gregor Robertson's regulation solution -- in the absence of leadership from the Conservative government -- is both welcome and necessary.

Pretending the marijuana mess will vanish into thin air by either ignoring it or putting pot users in prison is far more delusional than you can get even by toking up.