With a price tag of $8.8 billion, the construction of the Site C dam would entail the largest outlay of taxpayer money in B.C. history. 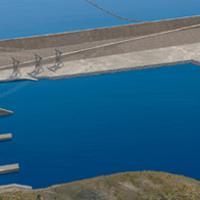 Site C Would Produce Good Power, but the Timing's Wrong

That's 18 times the cost of B.C.'s fast ferries. Or 11 times the cost of a sewage treatment facility for the Capital Regional District. Heck, it's the most expensive infrastructure project currently proposed in all of Canada.

Yet a BC Hydro survey in July 2014 found only six in 10 British Columbians had even heard of the project.

Perhaps that's because Site C, proposed for near Fort St. John, is out of sight, out of mind for the vast majority of British Columbians. The dam -- given the green light by the province a week before Christmas -- would be the third on the Peace River and, if built, will flood 107 kilometres of river valley, impacting 13,000 hectares of agricultural land.

The province has capitalized on the "out of sight, out of mind" factor to try to get away with ignoring recommendations made by its own expert panel.

In its recommendations to government, the joint federal-provincial panel said it had neither the time nor the resources to analyze the costs of the project and couldn't determine whether the dam was needed on the timeline provided. It recommended a review by the B.C. Utilities Commission (BCUC), a body created for exactly this purpose.

The province decided to go ahead with the project without that independent analysis of costs and demand. Normally, the folks appointed to these panels file their reports, then quietly slip into the abyss. But in an unprecedented turn of events, the chair of the Site C panel spoke out last week in an interview with my online news outlet DeSmog Canada.

Harry Swain said the government was unwise to ignore his panel's recommendation for a review by the BCUC and should have held off on making an investment decision.

"Wisdom would have been waiting for two, three, four years to see whether the projections they were making had any basis in fact," Swain said.

The province continues to argue that there's no need for an independent review of costs because the project has already been thoroughly reviewed by -- guess who? -- BC Hydro itself.

"Is the answer therefore that such projects are only to be examined by the proponent?" Swain said.

Swain, a former deputy minister of Industry Canada and Indian and Northern Affairs Canada, described the province's failure to investigate alternatives to the dam as a "dereliction of duty."

The province was instructed to investigate geothermal 32 years ago when the Site C dam was first turned down by the BCUC.

Questioned by Oak Bay-Gordon Head MLA Andrew Weaver on the government's decision to forge ahead with the dam in the Legislature recently, Energy Minister Bill Bennett said: "We looked at absolutely everything, and the decision that we made on this side of the House was to honour the ratepayer."

But that's not what the province's expert panel said in its report.

"The panel concludes that a failure to pursue research over the last 30 years into B.C.'s geothermal resources has left BC Hydro without information about a resource that BC Hydro thinks may offer up to 700 megawatts of firm, economic power with low environmental costs," the report read.

The Canadian Geothermal Energy Association says geothermal can meet all of B.C.'s future energy needs at a lower cost than Site C with fewer environmental impacts. The association has requested meetings with Minister Bennett with no success.

That's dumbfounding enough as it is, but especially when you consider that Site C is expected to lose at least $800 million in its first four years of production because it will generate more power than the province needs at triple the market rate, so it will be sold at a huge loss.

The project is now facing six legal challenges, including lawsuits filed by Treaty 8 First Nations and the Peace Valley Landowners' Association, which could prevent construction from beginning this summer as scheduled.

"I think the province was determined to go ahead with the project from the beginning," Swain said.

Question is: what more would it take for the province to reconsider its decision to forge ahead with this dam without having the costs and need independently reviewed?