British Columbia plans to start construction of the $8.8-billion Site C dam on the Peace River next summer, Premier Christy Clark said today in a controversial announcement that was welcomed by some and panned by others. 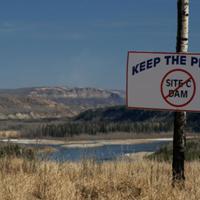 "Once it is built, it is going to benefit British Columbians for generations, and that is why we have decided to go ahead with the Site C clean energy project," Clark said at a press conference at the provincial legislature.

Clark said that it's unknown how much the project will add to BC Hydro customers' bills, but that the cabinet reached the decision after careful analysis and much discussion.

Site C was the most affordable, reliable and sustainable option available to meet B.C.'s growing power needs, she said. Over the next 20 years, the government is estimating that demand for energy will increase by 40 per cent as both the population and industry grows. Roughly one-third of that power is expected for residential use.

First proposed some 30 years ago, Site C will be the third of a series of dams on the Peace River and will flood an 83-kilometre long stretch of the river to generate 1,100 megawatt hours of electricity, enough to power 450,000 homes per year.

"If you accept the premise British Columbia is going to grow, then you also accept the premise we're going to need more power," said Clark. That power will come from a variety of sources, including the Site C dam, which will have a lifespan of 100 years, she said.

The president of the B.C. Chamber of Commerce, John Winter, was at the legislature for the announcement. "Tough decision, and government is to be commended for making it under very difficult circumstances, but [it's] certainly one that's worth making and we're very pleased," he said.

Winter said the dam will provide reliable, affordable energy for a long time and will attract investment to the province. "It's an enabler," he said.

Building Site C is an investment in economic development, said Philip Hochstein, the president of the Independent Contractors and Businesses Association of B.C.

"I think it's courageous and far-sighted of the government to make this big statement and to really invest in economic development for British Columbia," he said. "This is the base, this is the foundation to generate jobs and tax revenue that we all want in British Columbia."

He said he believed the government's estimate that construction for the dam would generate 10,000 jobs is reliable.

Representatives of the Association for Mineral Exploration and the B.C. Road Builders and Heavy Construction Association were also at the legislature to show support for the announcement.

The Clean Energy BC industry group, which had lobbied to put the money for Site C into alternative energy instead, released a statement saying it was disappointed with the decision, but believed there would be opportunities to cooperate with the government to provide privately produced clean energy.

“We think it's courageous. I give the government its due today,” Clean Energy BC executive director Paul Kariya said in a phone interview. “It was a tough decision; I don't agree with it, but so be it." Members of the group wanted to have the opportunity to bid on providing the power, he said.

John Horgan, the leader of the New Democratic Party opposition, said hydroelectric projects have been good investments for the province in the past, but times have changed.

"This is a $9-billion gamble from a premier we can't take at her word," said Horgan. "We have an abundant number of choices. The energy industry is transforming by the minute."

The B.C. Utilities Commission, an independent regulator, should be allowed to look at Site C and review the cost analysis, timing and consequences for ratepayers, said Horgan. "No one has looked at the math," he said. "The utilities commission is there to do that."

The project had previously been budgeted at $7.9 billion. The revised $8.775-billion figure announced today adds a $440 million reserve fund as a forecast allowance, $200 million due to a six month delay in the planned start, and costs associated with the change from the HST back to the PST.

"I'm not convinced we've seen the final number on this," said Horgan.

Energy is cheap in North America right now and Site C should be compared to a $9-billion package of alternatives such as solar, wind and geothermal, he said. "Technologies are changing."

"I guess Christy Clark has thrown us a lump of coal for Christmas," said Ken Boon, president of the Peace Valley Landowner Association and a local farmer, campground operator and log home builder whose lands are slated for flooding.

"Site C is the beast that we should have driven a stake through the heart of a long time ago," he said. "We're not giving up... We've got a lot of work to do now to try to stop this."

His organization of local property owners is involved in two legal battles against the project, seeking judicial reviews at both provincial and federal levels, and he doesn't expect next year's promised construction can begin until those cases are resolved.

Ken Forest has lived high on the banks of the Peace River valley since 1972. For 17 years he worked as a local school principal and science teacher and is now a member of the Peace Valley Environmental Association.

He said he discovered wolf tracks just yesterday while walking below his house towards the river banks, and has recently seen a wolf, several elk, and his first stellar jay in his yard.

"Once the land is flooded, that land is gone forever," he warned. "If you look at four years over an election period, it's of no significance to the province. But if you look over the next 100 years -- with the way climate change is forecast to go -- we're going to need every bit of agricultural land that we have... but it's going to be gone."

He said the dam's approval makes him contemplate moving out of the valley, even though his property value is likely to rise once his lookout location gains a prime view of the reservoir.

"The money means nothing to me," he said. "I'm more interested in keeping this valley intact for generations to come."

Flooding the valley would impact about one-third of his family's holdings, said Ross Peck, a former guiding outfitter whose ancestors have lived in the Peace River valley for 90 years, and in the region even longer.

He owns three properties in the valley, raises horses, grows hay, and hopes to get an asparagus market garden started. Flooding will cause a loss of agricultural land and alter access to the river, he said.

"The government's made it well-known they'd like to see this go forward, dating back to [former premier] Gordon Campbell," he said. "The disregard for the local people has carried through the project all through the so-called consultation processes right up to the announcement today in Victoria."

He said the government is doing "slip of the hand accounting" by making future ratepayers cover construction costs down the road. He doesn't feel the government is being "fair and upfront" with taxpayers about what it's really going to cost. "It really is a terrible legacy we're leaving our children and grandchildren: to pay for our mistakes," he said.

The project faces five court challenges, with a sixth soon to be filed, seeking a judicial review of the federal and provincial Joint Review Panel's decision that Site C could proceed. Four of those are from First Nations.

"I was hoping there was light at the end of the tunnel," said Roland Willson, chief of the West Moberly First Nation, which is involved in the court challenges. "But they've chosen to fight instead of building bridges."

The Site C decision will affect the government's other development plans, he said. "Our only option is to start pushing back on everything, on shale gas and pipelines," he said. "If they're not willing to work with us to develop alternatives, we're going to do whatever we have to do to protect our treaty."

Willson said the band is preparing to file injunctions against approving any permits until their court cases conclude.

Impacts 'that can't be mitigated': CEO

BC Hydro President and CEO Jessica McDonald said the Crown corporation has spent seven years consulting with First Nations. "We acknowledge and respect that there are impacts," she said. "There are impacts that can't be mitigated."

Discussions are continuing and there are hopes they'll reach an agreement on accommodation, she said. Courts have ruled that in certain situations it may be necessary to compensate an aboriginal group for any adverse impacts a project may have on its treaty rights. Compensation could include habitat replacement, job skills or training, or cash.

Energy and Mines Minister Bill Bennett said the project is in the long-term best interest of the province, though he acknowledged it comes at a cost to people in the Peace River valley. "There are impacts to people who live in the Northeast, and nobody is happy about that," he said.

It's a major project and worth building, he said. "It's big, it's expensive, it's a huge project, but it's eight per cent of the total electricity needs in the province."

Still, Bennett suggested that building Site C would mark the end of the era of large hydroelectric projects in the province. "It is the last one," he said. "We don't have any other shelf-ready Site Cs around."