New Westminster's Quayside neighbourhood is a nice place to live, with over 8,000 upscale condos in multiple towers overlooking the Fraser River. But with a labour dispute involving a company whose trains reportedly carry hazardous goods like propane, ammonia and chlorine right next door -- and with the company refusing to state publicly how many of its trains carry such goods -- some residents might wonder if it could be at risk. 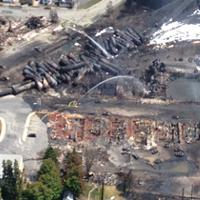 Quayside has only two overpass exits which could easily be blocked in the event of a derailment or leak involving hazardous goods, according to a 2013 CBC report. The neighbourhood sits next to a rail yard used by four different companies, including the short haul Southern Railway of BC, which locked out its CUPE 7000 employees at the beginning of this year.

Any of the railcars in the yard could carry toxic materials, and the companies involved are not required to inform the public about such dangerous cargoes. To make matters worse, Southern Railway trains are now being operated by a group of just over 20 managers, work done before the lockout by over 100 experienced, trained union staff.

While the managers include many employees who once operated trains before moving into office jobs -- and are still certified to do so, according to the company president -- it is hard to see how this short-staffed, out-of-practice group can guarantee the kind of safety provided by unionized staff. Even if only a few cars contain hazardous goods, it would only take one leak or derailment to endanger thousands whose homes are close to the tracks and rail yards.

In 2013, a CBC investigation reported that "cars capable of holding a wide range of hazardous and toxic substances are left idle in the New Westminster rail yard for days or more at a time." A story last March in the Aldergrove Star reported that freight moved by rail across the Lower Mainland by companies including Southern Railway included propane, chlorine, hydrochloric acid and sodium hydroxide.

To be fair, the bulk of freight moved by Southern Railway presumably consists of automobiles, grain and other non-toxic goods, both during the lockout and when union members staff the trains. However, the general public cannot learn how much hazardous freight is being carried on manager-operated Southern trains during the lockout, as the company refuses to say.

In a Feb. 6 email, Southern Railway president Frank Butzelaar said the company does not discuss the commodities it moves "as a matter of security and customer confidentiality." He added that the company ensures "first-responders do have such information so that they may respond in the event of an incident."

What Butzelaar didn't mention is that rail companies are required to give the hazardous goods information to first responders only once a year, and then only after public safety bodies sign a non-disclosure promise.

New West fire chief Tim Armstrong told the CBC in 2013 that rail companies are not obliged by federal regulation to provide his department with specific details of the materials hauled by their trains, or provide the times that any hazardous shipments might roll through town, unless he requests the information. Even then, Armstrong said he is bound not to disclose the information to anyone else.

The disclosure was required by federal edict in the wake of the Lac Megantic derailment in 2013, Canada's most lethal rail disaster since Confederation, an accident that killed 47.

Southern Railway runs its freight cars on almost 200 kilometres of Lower Mainland track, 100 km of which are considered mainline, and some of which run close to other populated areas such as Abbotsford, Langley, Cloverdale and Newton, according to a map on the company's website.

"I'm concerned about safety," said CUPE 7000 president Bill Magri. "The managers are working long shifts and they are inevitably getting exhausted. And exhausted people make mistakes."

Evidence of at least one such mistake made by Southern Railway managers is now on the public record. On Jan. 13, CUPE pickets filmed a manager-operated Southern train going through a level crossing near Annacis Island without headlights on a dark, foggy night.

The company told CBC it was a mistake and that the responsible manager was disciplined.

Get bargaining back on track

Southern Railway locked out its workers after six months of unenthusiastic bargaining, during which the company only met with union negotiators six times, Magri said.

During those meetings, the company tabled a proposed new contract that included significant concessions, such as removal of language that let workers limit exhausting and potentially dangerous overtime, and a new, two-tiered system of health care benefits for retirees that would disadvantage new workers and split the workforce, thus weakening the union.

Southern Railway has said this is justified because it is a small local company without the deep pockets enjoyed by other bodies that employ CUPE members.

But this rationale rings hollow for Magri, who pointed out that the rail company is part of the multi-billion dollar empire of Dennis Washington, who also controls local shipbuilding and barge giant Seaspan and many other firms in the Washington Group.

Southern Railway's Butzelaar declined to comment on these matters.

It is past time for Southern Railway to end its punitive and dangerous lockout and get back to good faith bargaining with its employees. A good start would be to withdraw some of the more draconian concessions currently being demanded.

With that, Southern Railway workers could get back to work, and any uneasy residents at the Quayside neighbourhood might be able to sleep better at night.