When Oxfam recently published its new report, "Wealth: Having It All and Wanting More," the media fuss was surprising. After all, we've been hearing about inequalities of wealth and income for many years (especially here at The Tyee). 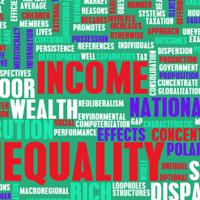 When Will Bankers Take Inequality Seriously?

What's more, Oxfam predicted that by 2016 those 80 individuals will be as rich as the poorest half of humanity -- some 3.6 billion people -- whose total wealth has actually been decreasing since 2010.

The super-rich 80 are the tiny top sliver, just one in 900,000 of the 72 million who make up the world's richest one per cent. It's also true that the top one per cent includes virtually every doctor and most tenured university profs in Canada, since they likely make well over $100,000 a year. The way Oxfam defines the one per cent is open to criticism: it uses the Forbes list of billionaires plus the national wealth estimates of Credit Suisse, which subtracts debt per adult from wealth per adult to arrive at a figure (see sidebar).

One critic of the report took issue with this, arguing that if you've got a small amount of pocket change, no income, but also no debts, you're better off than billions who have "negative net worth."

Other media just pooh-poohed the Oxfam report on principle. A writer in Forbes dismissed it as "a little report out from Oxfam today whining about the way that the global wealth distribution is so unfair."

For a somewhat more balanced response, The Tyee talked with Iglika Ivanova, an economist with the Canadian Centre for Policy Alternatives. She does have reservations about the quality of Oxfam's data, but said they're the best available.

"We don't have very detailed reliable data on wealth holdings, especially very large wealth holdings. Information on billionaires comes from Forbes' richest people lists, even in serious academic books like Piketty's Capital in the 21st Century. Statistical agencies just don't collect it. The intro to the Credit Suisse report explains just how many assumptions are necessary to produce estimates of global wealth," she said.

"As a side note, the U.S. has a lot better wealth statistics than Canada, with wealth survey every three years (the latest in 2013). Canada's surveys are ad hoc, rather than being regularly scheduled, which is something I'd like to see changed." She noted that Canada's last three surveys were in 1999, 2005 and 2012.

Rather than just marvel at the numbers, we might ask ourselves how we got into this situation. By coincidence, economist Paul Krugman's recent column in the New York Times, "Hating Good Government," helps explain matters.

Krugman points out that we don't "debate" issues like climate change or economics or health care or penal reform -- because one side is immune to evidence and even experience. That's the side funded by the Koch brothers and other oligarchs, those for whom most of the one per cent are errand boys and clients.

As Krugman and others have argued, the idea of the "one per cent" is a distraction. It's that one per 900,000 who has the real wealth and power, and the rest of the 72 million do as they're told. And well they might -- if they keep their noses clean, they might inch a little closer to the semi-divine top million.

The one per cent have dedicated their considerable intellects to creating a world their masters like. After the unpleasantness of two world wars and a red revolution, which were setbacks, they finally began to build the network of think tanks, endowed professorships, and foundations that would lend credibility to the idea that democratic government is ipso facto evil. "Government isn't the solution," Ronald Reagan intoned; "government is the problem."

Happiness was then defined in purely personal terms, as being a consumer of endless goods and services. Misery was being limited in consumption by also being a "taxpayer" robbed of "hard-earned" income to support bureaucrats and their "do-gooder" programs for "welfare queens." The idea of the "citizen" faded into the white noise of celebrity scandals and dire foreign threats. As Krugman notes, the "conservatives" who orchestrated this were actually reactionaries.

In Canada, the reactionaries arguably got going with the recession of the early 1980s, when we had to deal with mortgage interest rates that peaked in Aug. 1981 at 22.75 per cent. British Columbia's Socreds fought the following recession by cutting spending still more, striking a theme that reactionaries have followed ever since. Citizens, transformed into terrified "taxpayers," thought they could survive if only they slashed enough in school and municipal taxes. So it has gone in all following recessions and even slowdowns.

The democratically elected government that had won the war and sustained three decades of prosperity was now and forever the villain. It was now the property of the real villains, the reactionaries who hate any role for government apart from fighting wars and policing the undeserving poor.

The triumph of the reactionaries has been to frame the "debate" so that alternatives to the evil-government meme are unthinkable, while their supporters (and their impotent enemies) go on paying taxes to support the growing demands of the surveillance state. But tax cuts sharply and deliberately shrink government's ability to meet social needs -- whether for healthcare, environmental research, or veterans' benefits.

Meanwhile, media owned largely by the billionaires have glorified the making of money even as most people's incomes have stagnated since the 1980s. Stagnation in turn has resulted in more two-income families and ever-increasing debt levels. Credit Suisse notes that Canadian debt per adult is now US$62,151.

We have already gone through one economic shock under the reactionaries, the meltdown of 2007-08. Somehow the reactionaries survived that to preside over first bailing out the banks and then imposing austerity as the supposed cure for unemployment. All the evidence shows they've failed, but reactionaries ignore evidence.

So we can look forward, at best, to a continuation of a stagnant status quo in which the wealthiest grow still richer. Or we may see another collapse, perhaps the bursting of the Canadian credit bubble, with still more corporate bailouts but precious little for the people who lose their homes and jobs.

The reactionary status quo isn't the result of natural evolution; it was engineered over decades. Now the question is whether we can re-engineer a stable, sustainable and humane society, or resign ourselves to an endless oligarchy.