"I used to be a fan of proportional representation, but I am not at all now I have seen it in action." -- Helen Suzman, South African anti-apartheid politician, 1917-2009 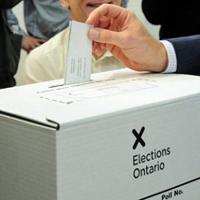 Our Broken Electoral System Ruins Yet Another Election

And on Dec. 3 you have your final "Opposition day" of the year -- an enormous chance to denounce the government, hold Harper and his ministers to account on uncomfortable issues, capture media attention, and keep Trudeau sidelined.

Even better, hapless Veterans Affairs Minister Julian Fantino is on the ropes for the mistreatment of Canada's veterans despite the Conservatives' professed love for the military, with wounded former Afghanistan soldiers suing the government in court over the slashing of their disability benefits.*

Meanwhile, oil prices are dropping dramatically, and consequently so is the government's predicted giant budget surplus it wants to spend on pre-election tax cuts, making its betting on bitumen a potential economic disaster.

So where do you aim your bullseye? Which topic do you lock and load on in such a target-rich environment?

Astonishingly, the NDP used the time to debate a proposed electoral system rejected four times by the provinces -- in referendums in Ontario, Prince Edward Island and in British Columbia twice, where I led those opposed to the Single Transferable Vote (STV) scheme in the 2005 and 2009 binding referenda.

Yet there was the NDP, earnestly demanding that federal elections be held under proportional representation rules. It was at least the fifth time in 12 years the NDP has debated pro-rep in Parliament, but that didn't stop NDP MP Craig Scott from trying again.

"Our voting system has knock-on effects, what I would call pathologies, that undermine the health of our entire democracy, from how Parliament works to citizen engagement," Scott said.

Uh-huh. What "knock-on effects" actually are I have no idea, despite fighting two referenda on election systems.

Is this the main issue?

Elections Canada did a comprehensive study about the reasons people did not vote in the 2011 federal election. Guess what: 60 per cent of those surveyed said "everyday life issues" from travelling to work or school schedules to illness caused them to not vote.

Only 30 per cent blamed "political issues" for not casting a ballot, and of those only five per cent cited "meaningless vote" as their reason. Yet that's the basis for why the NDP and pro-proportional representation fans always say we need to change electoral systems.

The NDP still like pro-rep, even more so because the Liberals don't agree -- they want an even goofier "preferential ballot" electoral system close to the failed STV system, but are smart enough not to talk much about it.

Some of the Liberals supported the NDP motion, which asked that the next federal election be the last to use first-past-the-post in a free vote on Dec. 3, but it was still easily defeated 166 to 110 by the Conservatives and remaining Liberals, who aren't upset with our current electoral system.

Nonetheless, leader Tom Mulcair, arguably the most effective Opposition leader Canada has seen for his prosecutorial prowess in cross-examining the prime minister, came to talk proportional representation in Victoria on Monday.

So would the NDP greatly benefit from a pro-rep electoral system? Errr, no.

It would actually be the Green Party that would boost its seats the most, from one now to maybe 25.

Then the Greens, with the fewest actual voters, could almost perpetually hold the balance of power, since proportional representation practically guarantees repeated minority governments, backroom deals, horse-trading on issues and legislative gridlock.

The federal NDP was given an unbelievable opportunity when the late Jack Layton led it to Opposition status for the first time in its 50-year history -- the chance to form a government and change the course of Canadian politics forever.

Mulcair and his caucus cannot, and must not, squander that possibility by focusing on side issues that will not win them anything but thanks from Greens and other small parties who can only prosper with pro-rep.

The NDP has to get serious with less than a year 'til the Oct. 2015 election. Does it want to form Canada's first social democratic government? Or does it want to be a debating society for issues that are irrelevant to most voters, who worry about jobs, the economy, public services and how we mistreat our disabled veterans?

Win an election and then talk all you want about proportional representation, if you have the time while running the country.

But until then, stick to bread and butter issues that matter to real people, or be prepared to keep talking electoral systems long after another party takes power.