What are Vladimir Putin's larger aims in the Ukraine and what can U.S. President Obama and other leaders in the West, including Stephen Harper, do to thwart them? Are we on the brink of a new Cold War as some have argued? 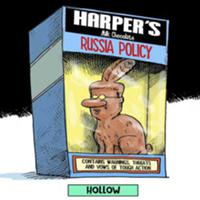 Recall that the Cold War was waged for decades on the premise in the West that the Soviet Union was determined to maintain and expand an empire knitted together by ideology and military might. U.S. leaders justified military interventions in Korea, Vietnam and elsewhere as necessary to "contain" Soviet attempts to undermine and topple democratic governments like so many global "dominoes."

Today, we do see a Russian leader fuelled by dreams of empire and obsessed by a 21st century domino theory. But this time the game is altered in crucial ways that place Obama, Harper and their allies in very different, difficult predicament -- one that could have been avoided.

Rise and fall of the last Russian empire

The collapse of the Soviet Union brought about the end of communism as a major force, and also ended the second Russian Empire. The Russian tsars, beginning with Peter the Great, attempted to extend Russia's frontiers from the Baltic, to the Pacific, and to the Black. Under the great tsars, much of Central Asia, the Baltic states, Belorussia, the Ukraine, the Caucasus, and the southern coast of the Black Sea fell under the sway of Russia. Ultimately, the empire receded, weighed down by corruption and an inability to adjust to the political and economic forces of the twentieth century, finally collapsing in 1917.

The period of transformation from tsarist Russia into the Soviet Union was momentary, and under Joseph Stalin, a new Russian empire was reconstituted under the guise of Soviet socialism. After initially granting the former non-Russian territories the status of republics, Moscow's rule was quickly imposed with an absolutism that would have made Ivan the Terrible blush. The Soviet leaders faced the same geopolitical challenges that geography had imposed on tsarist Russia and dutifully they proceeded to secure the same regions that had fallen to the Russian tsars.

The Russian and subsequent Soviet empire faced the same challenge of overcoming the fear of invasion -- the Russians had suffered under Mongol and Ottoman occupation -- made vulnerable by the country's exposed eastern and western flanks. Russian leaders have historically claimed that enemies and rivals have hemmed in the country. In 1941, the German invasion re-awakened Russian paranoia and Stalin's post Second World War ambitions, partially whetted by a desire for more territory, came from a need to safeguard Russia from another invasion.

During the Soviet era, Moscow's leadership also feared the domino effect if one of its satellites broke away, and even if remaining a communist state, would encourage others to follow suit. Some pundits are arguing that Vladimir Putin is in the process of recreating a Russian Empire, but an empire based on corruption more akin to the later Soviet period than that of the tsars. They argue that in this context, Putin is afraid of another kind of domino effect. Most of the former Soviet satellites are ruled by authoritarian regimes that thrive on corruption. Consequently, if the Ukraine, a country that was governed by a kleptocracy, broke away, it could have inspired similar mass opposition to Putin and his cronies. The theory is that Putin is buying good will with the Russian people by feeding them visions of empire and past glories while solidifying his grip over the country.

Why Putin is obsessed with Ukraine

No doubt many middle aged Russians have nostalgic memories of Soviet greatness and harbour resentment at the demise of past greatness at the hands of capitalist America. They certainly revel that Putin has restored the Crimea back to Russia and applaud the Russian leader's attempts to restore Russia as a world-class power. The question that the West faces is whether, for Putin's ambitions, the Crimea is enough. Putin can argue that the Crimean Peninsula had always been part of Russia and when Khrushchev gave it to the Ukraine, that country was part of the Soviet Empire. The Russians in eastern Ukraine are now agitating for union with Russia and it is not certain if these are the legitimate wishes of the population or if they are being organized by Moscow. It is even possible that Russian Special Forces are helping the demonstrators seize buildings and police stations. Certainly Putin has a unique interpretation of the Russian-Ukraine relationship.

For example, the president of the Russian gas company Gazprom, Alexei Miller, confirmed Saturday that the Ukraine must pay Russia 11.4 billion dollars, which corresponds to the reduction in the price of gas which was given to the country for the last four years. The lower price was part of the Kharkov Agreement, signed in April 2010 (and to last until 2042), which permitted the Russian fleet to use the Black Sea base of Sevastopol in the Crimea. The agreement was annulled this week, Mr. Miller said in an interview with Russian state media, since the Crimea is now part of Russia and therefore the Ukraine must repay the previous reduction.

In effect, Putin is trying to destroy what is left of the Ukraine economy by making it easier for Ukrainian Russians to seek union with Russia, under the fear of poverty, eventually forcing the Ukraine to reestablish its client relationship with Moscow.

Under these circumstances, Washington is faced with a serious problem that will impact to what degree non-aligned (countries not part of NATO or the EU) will be able to trust the U.S. The dilemma facing the Obama Administration is that if it pours millions into the Ukraine the money will simply enrich Russia, as Kiev will have no choice but to pay its debts to Moscow. A military option is not possible, so it will be a matter of financial aid and sanctions against the Russians. Extensive sanctions will hurt the EU countries and the world economy, which leaves Washington with two options: pump massive financial aid to the Ukraine or simply leave the country to return back to the Russian sphere.

Here in Canada, Prime Minister Steven Harper faces his own wrenching dilemma. He was prepared to condemn Putin's move against Ukraine and takeover of the Crimean peninsula for the sake of Ukrainian-Canadian voters, and went so far as to say Putin's Russia should be punished with expulsion from the G8. But the other challenge is Canada's North. As long as Russia is part of the international community through organizations such as the G8, Putin was less inclined to look for adventures outside of Eastern Europe, for example in the North Pole region.

Given the high stakes and constricting options, it would be fascinating to be able to listen in on conversations Barack Obama may be having with Stephen Harper and other western leaders at the moment. If the Obama White House had handled the Crimean crisis with more subtlety, it could have avoided a greater crisis. If the U.S. had agreed to a referendum for the Crimea, albeit one under UN auspices, it would have given the people of the peninsula a free choice and forced Putin to abide by whatever the outcome. In that case the Crimea would have either freely joined or rejected to become part of Russia. Putin would not have been demonized and forced to accept the rule of law.

As it stands, Vladimir Putin has nothing to lose and everything to gain by continuing his aggression against the Ukraine. And the U.S. will be left holding the bill.