My schizophrenia, I've been told, is just a "chemical imbalance in the brain." It is not my fault. It is a brain disease. Drugs will stabilize me. 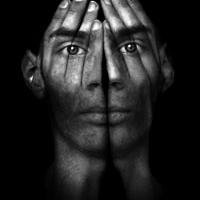 I don't trust them. Instead, I believe that microscopic rats are eating my brain, a homicidal man is tracking my every move, and the Voices I hear are urging me to commit suicide.

I am terrified. What if the rats and Tracker and Voices win?

Or, what if my brain chemistry tilts further askew, spilling me slowly, surely further into my paranoid schizophrenia?

The experience of schizophrenia can be terrifying, but sometimes its treatment is just as distressing. Personally, I believed that the medication I was supposed in take in pill form had those tiny rats in it. When in hospital, I often received the medicine by forced injection and was tied up in five-point restraints. The injected anti-psychotic was usually given in conjunction with a needle of a sedative.

Both, I delusionally thought, contained more rats. I was again terrified, believing that those new medication rats would join the others in the consummation of my brain. That is, they would change the structure and thus the chemical balance of my brain.

Having my Master's degree in neuroscience meant that I believed the doctors when they said my schizophrenia was a chemical imbalance; we were just at odds with the mechanism. Was it rats eating or dopamine, among other neurotransmitters, levels being off-kilter? We both had means of treatment: I would bleed the rats out, while the psychiatrist's pills were designed to restore that oft-quoted "chemical balance."

Some (as reviewed by Navari and Dazzan 2009, Moncrieff and Leo 2010) have now found that taking anti-psychotics changes not only the chemistry in a schizophrenic brain, but also its very structure. As such, it has been proposed that these medicines should only be administered after informed consent. Never, some say, should anyone have such brain-changing drugs given without, or even against, that person's permission. They propose that someone with schizophrenia should have the right to refuse such brain remodeling.

What they neglect to mention is that the brain -- everyone's brain -- changes constantly, first at the level of the synapse (the site of re-balancing the chemical brain), then later at the level of brain structure. Yes, anti-psychotics can change the brain; the brains of medicated schizophrenics, both in overall size and in the size of specific areas, are smaller then non-medicated patients.

These abnormalities used to be attributed solely to the disease itself, but are now thought to be, at least in part, the result of medication. But what about the changes, synaptic and structural, that inevitably take place in any untreated, chemically-imbalanced brain?

Should I be worried? Einstein's brain, I must note, is said to have been smaller than average.

I can't afford to worry. Without medication, I fall into psychosis. My question, then, is this: are my medications changing my brain for the better or for the worse? What I care about is the quality of my life, my sanity, my self. If that takes a bit of brain renovation, so be it. I seem to function better with a (supposed, if I am a typical medicated schizophrenic) smaller brain and enlarged ventricles. Is such medication wrong? We cannot decide that these neural changes are more important than our lives at the behavioral, emotional and cognitive levels. What matters most to me is being well, without hallucinations, delusions and paranoia.

I make this choice everyday, four times a day: I take my medications. But what about when I am overwhelmed with the symptoms of my schizophrenia and in the hospital? When I then refuse what I think are rat-infested pills or liquids, is it right for another to decide on my behalf to inject these medicines into my body? This is involuntary treatment. I cried, I screamed, I was terrified and humiliated; I was protesting as fiercely as I could, but still they held me down, tied me up, and violated my body with needles.

Thank you, I now say.

Not for every injection, every hour in restraints, every day of solitary confinement. These were at times abused, avoidable if only there were appropriately-staffed wards that would allow a nurse or doctor to take the time to stop, listen, and hear me. But had I not been at times treated involuntarily, I would never have become well.

I ended up certified in the hospital, fought every injection, and yet this would give me my life back. Ill, I was suicidal, due to my hallucinations, delusions and paranoia; well, I was not. I would not have made the transition -- and convinced that anti-psychotic medication gives me my life back, have over five years of mental stability -- without involuntary care.

Did that care change my brain? Undoubtedly. Thankfully.