At some point, the voting public are going to demand integrity in government, a commodity not only long missing, but seemingly extinct. 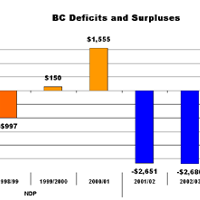 We just gave the federal Conservatives, on the heels of being found in contempt of Parliament, a resounding victory. We evidently don't give a damn about that word "integrity." Do we carry the same indifference to honesty and indecency in our provincial government? Do we not care about the following?

Gordon Campbell promises not to privatize BC Rail in two elections and does.

Campbell, a stickler for propriety while in opposition, gets thrown in jail for drunk driving and does not resign.

Campbell not only supported the highly controversial public-private partnership boondoggles which have cost B.C. tax payers millions and will cost millions more, he accepted the honourary chairmanship of the Canadian Council for Public-Private Partnerships, as did his finance minister Gary Collins. Far from being a minor matter, the premier was in bed with the people with whom the government was, presumably, at arms-length negotiations with on many huge deals that are, in fact, sweetheart contracts.

Campbell permitted Alcan to set out B.C.'s energy policy, which ravages our rivers and forces BC Hydro to sign deals with private corporations, in turn forcing Hydro to pay for private power they don't need and double the market cost. The government explained this scandal in a statement by then-finance minister Colin Hansen, who spoke one mistruth after another.

Campbell and Hansen supported the 2009 budget in that year's election almost certainly knowing it was false, and then added well over a billion dollars to it after they won. If they did not know, the entire finance ministry ought to be fired, because they knew trouble was coming because of falling sales tax and stumpage receipts.

They had to know. The stock market failures were another sign and were sufficient for two fiscal ignoramuses, my wife and me, who cleared out of the market before the crash.

If Hansen, and through him Campbell, didn't know what was happening in the world when they went to the polls based on a phoney budget, they were bungling incompetents. As one who was in cabinet prior to the 1981 recession and saw the finance minister predict it by assessing diminishing receipts, I can tell you that Campbell and Hansen knew. These sorts of deals don't come together overnight, and if you believe that the government wasn't negotiating with Ottawa long before the '09 election, I have a bridge for sale you might want to have a look at.

Campbell and Hansen denied during the '09 election that the HST was even on the radar screen, and then safely elected, implemented it. Hansen had a full and damning finance ministry report on his desk two months prior to the election.

BC Rail dodge and weave

Then there was the BC Rail trial that, surprise, surprise, was settled just as Campbell and his former finance minister, Gary Collins, were to take the witness stand -- in a breathtaking move, the crooks had their legal fees of $6 million paid by the taxpayers!

The Campbell government, as demonstrated by the Gateway project, has no respect for the Agricultural Land Reserve, nor bird sanctuaries nor, indeed, for sensitive environmental areas wherever they may be.

The Liberals long ago told Ottawa that it didn't have any opposition to oil tankers plying our coast, nor will they do so to pipelines from the environmentally catastrophic tar sands -- spills from the pipelines and oil tankers are not risks, but certainties waiting to happen.

It goes on, but you get the drift.

We will be asked, in an election to likely to be called in advance of the set day, to support a premier who was there for most of the Campbell scandals, and now wants us to save the province from the NDP!

If we don't give a damn about corruption, cronyism, hypocrisy and falsehoods, we will approve that conduct and let the Liberals go at it again for another four years.

The Liberals claim that the NDP left us penniless in 2001, yet within hours of being in power gave over a billion dollars in tax cuts for the well off.