"My words fly up, my thoughts remain
below.
Words without thoughts never to heaven
go." 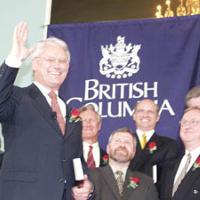 Will McMartin Shoots Down Squawking Gaggle of Campbell Praisers

That's the sad legacy left by B.C. Premier Gordon Campbell after he announced plans to resign when the BC Liberal Party chooses a successor.

Campbell deserves credit for serving many years as an elected official, no question.

But Gordon Campbell's record is a massive contradiction between the good intentions he claimed and the actual road to hell he paved for so many unfortunate British Columbians while his friends and backers waved from the steamroller.

Take Campbell's words and compare them to his deeds.

In the July 2001 Speech from the Throne, Campbell's newly elected government outlined its values and objectives:

"There are 10 overarching priorities: (1) a top-notch education system for students of all ages," the speech read.

But in his televised address of October 27, 2010, Campbell admitted that after nine years in power: "Right now in British Columbia, one out of five Grade 4 students don't read, write, or have the math skills at the Grade 4 level. That's really not good enough for any of us."

And Campbell went on to confess: "It's always surprising to me when I hear that one out of three children are not prepared for kindergarten or Grade 1. We can and we will do better."

Surprising? Not good enough? You're the damn premier of the province! And you have failed those children.

That doesn't even include extensive cuts to education, including school closures, elimination of school librarian and teacher aide positions or ongoing battles with school boards, teachers and staff.

It gets even worse.

But in June 2010, Statistics Canada reported that British Columbia had the worst child poverty rate in the country -- for the seventh straight year.

Not a surprise if you consider the numerous attacks Campbell launched on social assistance recipients, like taking away their earnings exemptions so that every penny they made working was clawed back.

And perhaps the "better services" Campbell promised had nothing to do with his government, because as child advocacy group First Call remarked: "In 2009 alone over 80 per cent of B.C.'s food banks saw an increase in people needing food, and one-third of B.C. food bank users are children."

Of course, when you refuse to increase the pathetic $8 minimum wage over nine years while introducing an even lower $6 "training wage" for workers with less than 500 hours experience, you condemn those workers to poverty too.

Then there was Campbell's commitment to ensuring that politics are kept out of public service.

The 2001 Throne Speech promised that: "My government will act in this session to make good on its commitment to initiate merit employment legislation to ensure that British Columbians are being served by a professional, non-partisan public service appointed strictly on merit."

But last month Campbell's chief of staff Martyn Brown, who has been the premier's top political advisor for 13 years, was appointed deputy minister of tourism.

It means that Brown -- Campbell's highly partisan political fixer -- likely got a $47,000 to $60,000 raise while the premier merely got the satisfaction of thumbing his nose at his own past principles.

But then, who's even counting the contradictions? Campbell also promised not to impose a Harmonized Sales Tax, swore that the B.C. deficit for 2010 was only $495 million, pledged not to sell B.C. Rail or privatize B.C. Hydro or rip up unionized hospital workers' contracts, and boasted he would lead the most open and accountable government ever and much more -- all broken vows.

Finally, Campbell's 2001 Throne Speech accurately sums up why Campbell ended up forced out of office as the most unpopular premier not just in B.C. history but that of the entire country, with a nine per cent approval rating that's lower than U.S presidents Richard Nixon's during Watergate or Lyndon Johnson's during the Vietnam War.

"Public trust and confidence in government must be earned, not through words but through deeds," the BC Liberals solemnly intoned.

Campbell's legacy is the jarring discrepancy between his lofty words and his damning deeds, the culmination of nine years of hypocrisy.