As we approach budget day on March 4th, Parliamentary Budget Officer Kevin Page tells us we are headed for structural deficits in the medium term and even larger ones in the long term. Meanwhile, Stockwell Day, the president of the Treasury Board, tells us there are bleak times ahead. The issue of taxes is being forced onto the political stage. 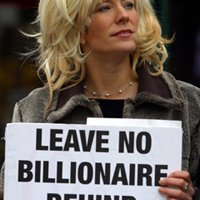 There are many elements to this story: the tens of billions in revenue lost yearly to ten years of tax-cutting, the upcoming additional corporate tax cuts, the regressive nature of our personal income tax system, tax havens and finally the lack of an inheritance tax in this country.

There has been a growing problem in this latter category over the past 25 years. It can be summed up this way: The rich are no longer with us. As Canadian social programs and municipal infrastructures erode, as the gap between rich and poor widens to 1920s levels, and as we face huge deficits into the foreseeable future, wealthy Canadians have long absented themselves from any responsibility for the country or the crisis it faces.

The rich and super-rich seem completely oblivious to the plight of their fellow citizens. How else can we explain the obscene pay packages of CEOs and other executives? They are the product of upper-class exceptionalism -- the normal rules of citizenship do not apply to them. They do not have to consider the fate of their country so they hide their money in foreign banks -- with no guilt -- to evade taxes. They are simply entitled to everything they have -- and to even more if they can get it. Class divisions in Canada have been growing now for at least 25 years, to the point that we seem to be entering a new era of feudalism. This is a part of the crisis in democracy that almost never gets talked about.

The secession of the successful

Robert Reich, who was the secretary of labour under Bill Clinton, once called it the "secession of the successful." This abandonment of the national project is due, in large part, to a quarter century of corporate globalization -- a process that relegated nation-building to the historical dustbin and created a global class of super-rich individuals who identified with each other.

They are symbolized by the corporate executive class and could not make an argument that their skills are worth anywhere near their pay packages. They are not supermen. Their success has nothing to do with talent or ability -- it is purely about class privilege and the drive to create a huge gulf between the new nobility and everyone else. The primary role they see for government is to protect their property rights against all incursions by an activist state.

The rich have seen their wealth increase dramatically and their tax rates go down radically in the past 20 years. In the early 20th century, the top one percent of income earners took home 15 percent of total national income. That declined to 11 percent after WWII when nation-building -- and the social equality that was integral to it -- was the focus of democratic government. By 1980, their share had fallen to 7.5 percent. Then it started to climb again. As of 2008, we are back to the early 20th century where the top one percent take home nearly 14 percent of national income -- nearly twice the share they had 30 years ago.

Throughout the ten year period of huge tax cuts, both personal and corporate ($100 billion over five years by Paul Martin -- and a further $100 billion, including GST, by the Harper government) there has been an aggressive rejection of any criticism of this gutting of the federal purse. Anyone talking about tax increases would expect to be immediately attacked and ridiculed.

But there may be real changes in the wind. Canada now faces huge decisions about its future and its fiscal viability as a nation state. And for the first time in 30 years, some very unusual suspects are calling for tax increases. Perhaps the most prominent (because it unleashed a nasty attack from the Prime Minister's Office) was Ed Clark, the CEO of TD Bank.

He told a business meeting in Florida that Stephen Harper was not listening to those on Bay Street who were telling him the best way to get rid of a large deficit is through tax increases -- on people just like him. And it wasn't just Clark. He was reporting on the judgement of the Canadian Council of Chief Executives (CCCE), the voice of the 150 largest corporations in Canada.

The head of the CCCE, John Manley, had also made the same point earlier. And two high-powered experts -- C. Scott Clark, former deputy minister of finance and Peter DeVries, former director of fiscal policy at the Department of Finance -- wrote a Globe article in December calling for tax increases. Even the political elite seems to be getting in on this dramatic shift. Historian Michael Bliss, a man with impeccable conservative credentials, penned an op-ed piece in the Globe entitled "Taxing the über-rich would reduce the deficit and social resentment."

Are the corporate and political elite finally getting it? Or are they worried about potential social unrest? Are they awakening from their wealth-accumulation binge with a political hangover and recognizing that it actually matters whether they have to step over destitute people on their way to the opera? Do the CEOs now, finally, realize that they need more than tax cuts to make them competitive -- that with eroding Medicare, bridges falling down, science being gutted, workers going untrained and disposable income for the rest of us on a steep downward slope, their future prosperity might be impacted?

It's almost too much to hope for -- so it's not "change we can believe in" quite yet. But what the hell. If no one else is going to take the lead on increasing taxes for the rich, I'll follow Ed.