[Editor's note: Last week, University of Victoria Environmental Law Professor Michael M'Gonigle wrote a two-part letter to a friend at the climate change conference in Copenhagen. That friend is student Jamie Biggar, who is attending conference as a member of the Canada Youth Delegation. This is Biggar's response.] 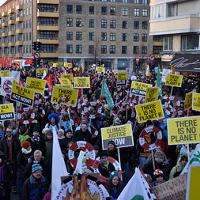 Thank you for writing to me last week. Writing back to you from Copenhagen gives me a chance for reflection in the midst of this frenzied struggle. So, deep breath, deep breathhh, deep breeaatthhh...

When I started this letter I was sitting in a room filled with dozens of members of the Canadian Youth Delegation to Copenhagen. It was Sunday, Dec. 13 and we were prepping for the final week, surrounded by laptops and huge pieces of paper covered in day-by-day strategy and evaluation.

We welcomed our environment minister, Jim Prentice, by ensuring that the conference delegates know he does not represent the majority of Canadians, or even his own parliament. We mobilized social networks at home in a coordinated campaign to destabilize our minority government's commitment to causing catastrophic climate change by lowering the bar for the treaty well below what science and ethics demand of industrialized nations.

I'm finishing the letter on Thursday, Dec. 14. It's been an insane day. There was a ridiculously violent police crackdown on the protest I was in this morning (I'm not too proud to admit that I managed to avoid getting arrested by running like hell), and as I write this we have eight Canadian youth doing a sit-in for a fair, ambitious and binding (FAB) deal at Copenhagen. They've been in the summit facility for six hours now, causing a big ruckus and getting huge support. They're not leaving till we get a FAB deal -- so it's going to be lonely at the hostel tonight.

Most vulnerable are least guilty

Climate treaty summits have a funny way of radicalizing people whose gut instinct is to be part of the establishment (I can hear you laughing!). The father of climate science in the U.S., James Hansen of NASA, is now regularly joining in non-violent civil disobedience -- particularly against the coal industry. However, the list of establishment types who no longer believe that regular channels can solve this problem is getting longer.

Last Sunday, Rajendra Pachauri, chair of the Intergovernmental Panel on Climate Change, questioned "the structure of nation states" and called for massive grassroots pressure from civil society to protect the people who are most vulnerable and most innocent. In the dark logic of climate change, they are almost always the same people.

I agree with much of what you wrote in your letter about the long-term consequences of endless economic growth and the role of the state. After 20 years it is clear that targets and actions are only partly informed by a "rational" discourse of experts. Ultimately, the fact that economic interests have structural advantages over science is obvious when you compare the jurisdictions that have acted to reduce global warming pollution and those that have not.

The E.U. countries that actually reduced their emissions in the Kyoto Protocol are rich and "carbon light." Because the carbon intensity of their economies is low, they can produce a relatively large amount of economic value per unit of global warming pollution. In contrast, rich countries like the U.S., Canada and Australia -- whose emissions increased dramatically in the same time period -- all have "carbon heavy" economies that produce a lot of global warming pollution for every unit of economic value.

Politics as usual is not an option

The pattern of the worst polluters doing the least is repeated at the Copenhagen Summit, where targets and action plans are well below where science and ethics tell us they should be to prevent a tipping point in our climate (25 to 40 per cent below 1990 levels by 2020 for industrialized countries).

Canada's minority government is promising a three per cent reduction below 1990 levels by 2020, and the likelihood that they will achieve this weak target is tiny given that they have no substantive plan and promise even more concessions for oil and gas producers. Our government's position is the most obvious to set the bar at the lowest levels to protect the worst polluters instead of the levels necessary to protect our future.

If we project these trends forward, politics as usual pushes us past every red-line there is. Add to this dynamic the promise that continual economic growth will eventually outstrip improvements in energy efficiency and clean energy technology, and it's clear we need to change our political economy. Which is just another way of saying that we need to transform our society.

Can we be practical and radical?

Lately, our conversations have always come back to the same thing: is my point of reference the dominant institutions of our society, or is it the societies and ecologies that sustain our world and make it thrive? Which do I think are more important and, by extension, which set of realities inform my actions?

Other people would look at this as the tension between being "practical" and being "radical." As you know, I struggle with framing up this question as a dichotomy where people pick one or the other; reformist or revolutionary, pragmatic realism or radical idealism.

Deal 1: Fight for the Peak

Most of the global movement focused on the Copenhagen Summit is asking for a fair, ambitious and binding deal. The double meaning of "ambitious" is key -- we need to reach a peak in global greenhouse gas production by about 2015, and then get levels back down to atmospheric concentrations of about 350 parts per million.

This goal can be achieved with a combination of investments in clean energy and infrastructure, carbon pricing and regulations (the three legs of the growth-friendly climate solutions stool).

The E.U. cap-and-trade system has helped several European signatories of the Kyoto Protocol reduce emissions while growing their economies. This kind of bridge deal would make legislated caps in the U.S., Canada and Australia far more likely. It is also the best chance we've got to seriously affect the emission growth trajectories of fast-growing nations like Brazil, China and India. Within our political economy there must be some kind of certainty between trading partners so that they won't be chumps if they cap their most polluting industries.

I know that you're reading this and thinking that a bridge deal is dangerous because it could give people a false sense of security. But the funny thing about these climate summits is the way that they can radicalize people with establishment tendencies. From global organizations like 350.org to local awareness groups, tens of millions of people have been directly engaged to support strong action at the Copenhagen Summit. I don't think these people trust for the global political class right now. They are ready to escalate.

That said, I agree with your position that economic growth will overwhelm anything that could come out of the Copenhagen Summit. Besides, the proposals that are on the table now are far too weak to prevent catastrophic climate change in the medium to long term. Knowing this, I think two things are essential right now: We must fight to win this battle so we have a chance to peak emissions within the decade, and we must understand that winning this battle means jamming our foot in front of the slamming door of history, buying a bit of time in which to transform our societies and prevent a long war in which time and structural power are not on our side.

Things have changed. As the Copenhagen Summit stumbles towards a deal that, if followed, would eventually commit the world to catastrophic climate change, we are seeing major cracks open in the credibility and legitimacy of world leaders. After all, peaking emissions is one thing, getting emissions down to zero and lower to get to 350ppm within a half century is another. There is a widely growing awareness that we need to change our political economy if we're going to address the root causes of climate change. At the huge Dec. 12 rally one of the most popular slogans was "System Change, Not Climate Change." Changing the system means changing our economy.

While we fight the political fights we can accelerate the creation of a social economy within civil society. Civil society has already started to transform itself by becoming part of the economy. We have entrepreneurial non-profits, community-based economic institutions and social enterprises, and a resurging cooperative and commons sector. The vast majority of these entities flip the ends-and-means relationship that exists within corporations. The end of a corporation is to profit and grow while the means is whatever services they happen to provide. The end of social economy entities is to provide a service, and the means is to grow to an optimal size for that task.

Of course I don't mean that scaling up the social economy is the "One True Answer." At the summit there is a lot of buzz about the many bottom-up strategies to transform our economy and infrastructure on the ground, strategies that we can follow while we mobilize politically at the level of the state. And on that note, I'm looking forward to hearing more about your eco-conversion idea.

To create a movement that can decisively win political battles and transform our economy and society we need to renegotiate the implicit deals that bind and organize our movement. At the moment, the movement has relatively tiny institutions (most of the biggest environmental non-profits in Canada have less staff than the average McDonalds) and vast numbers of people who are loosely connected and asked to do little more than sign petitions and donate a bit of cash. We are going to need a lot more time, energy, smarts and money from more people and more institutions.

As you know, work to change the way we organize together began long before the Copenhagen Summit. The basic idea is that to get more from people they must get more -- more power to shape decisions, more training and more community. Now everyone knows that we need to do much better as a movement, and we have allies in a wide range of institutions that have much more capacity, from unions to churches. We have lots of models that we can experiment with and take to scale.

Okay M.M., now I'm looking up from my laptop and looking at the people who are with me here in Copenhagen. I'm thinking about the thousands of Canadians that have worked together over the last months and are now making phone calls and hitting the streets -- many of whom, maybe most, had never been politically engaged before in their lives. I know that for many of these people, certainly for myself, this is the first time that they have felt like they were part of something so much bigger than themselves.

There's something powerful brewing, M.M., something that almost shakes with its energy and potential. People with establishment tendencies are being radicalized.