World leaders wrapped up their summit in New York, prompting optimistic talk in some high places that the crucial climate change conference in Copenhagen in December might succeed. That's far from certain, of course, but one positive trend is that many countries with large tracts of forests are ramping up proposals about how to reduce emissions from forest loss and degradation. There is even a name for this: REDD (Reducing Emissions from Deforestation and Degradation). The government of Brazil, for example, has pledged to reduce deforestation of the Amazon rainforest by more than 70 per cent by 2018. 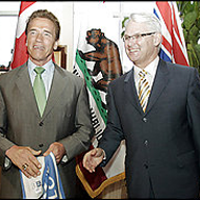 Yet B.C. has set no target to reduce massive emissions from our forest land base. Just before B.C. Day, while forest fires across the province were spewing out huge amounts of carbon dioxide, the government released British Columbia's Greenhouse Gas Inventory Report. The report gives a break-down of CO2 emissions by sector -- with a major source tucked away in the "memo" section and not counted at all.

According to the report, total greenhouse gas emissions in British Columbia in 2007 were 67 megatonnes. These mainly originate from the use of fossil fuels (80 per cent) as well as waste (six per cent), agriculture (four per cent) and deforestation (five per cent). So far, all correct. But it's the innocuous-sounding item "emissions from forest land remaining forest land" that hides the real bomb: a whopping 51 megatonnes of CO2. This figure appears only as a "memo item" in the report and is not counted as part of B.C.'s total emissions. B.C.'s carbon emissions would be 77 per cent higher if emissions from forests were included.

B.C.'s goal to reduce CO2 emissions by 33 per cent in 2020 compared to 2007 ignores emissions from forest land. New data shows an alarming trend; both B.C.'s and Canada's forests are becoming a source of carbon dioxide rather than a sink because they are releasing more carbon than they sequester annually. The federal government conveniently decided not to include emissions released from forests in the national greenhouse gas inventory. The provincial government followed the same approach. Obviously, this doesn't make emissions from forests go away.

The 2007 data on the emissions and sequestration of our forests in the new provincial report breaks down as follows:

The 34 megatonnes of CO2 sequestered by our forests buffer, to a certain extent, the overall forest-related emissions (from logging, wildfires and slash burning). However, the emissions from decay of dead organic matter have increased dramatically since 2002 due to the Mountain Pine Beetle outbreak. They are the main reason why B.C.'s forests are no longer a sink for carbon but have become a source.

The proper management of forest affected by the Mountain Pine Beetle is of high priority if we are to mitigate further loss of carbon storage in the affected areas. At the same time, ongoing emissions from these forests will be somewhat beyond our control for a period of time. Large-scale salvage clearcutting -- for example for bio-energy -- is not a sustainable solution because it will negatively impact natural regeneration and environmental services in many areas. Not all the trees in the affected areas are dead. Healthy trees are growing in the understorey, and even dead trees reduce erosion and flooding and continue to store carbon for a period of time while young trees grow back. Since climate change will bring about more extreme weather events, we have to maintain ecological functions of our forests like flood control and avoid disrupting these further through more clear cuts.

Increase the area of old forest off-limits to logging. Emissions from harvesting are much higher when logging occurs in old growth forests compared to younger forests. This is particularly true for coastal forests with little natural disturbance and massive carbon storage accumulated over thousands of years. Shifting harvesting from old to second growth will immediately reduce GHG emissions from logging. It will also help species that depend on old growth forest, particularly where old forest is in deficit.

Reduce wood waste and slash burning. A 2009 study by the Canadian Centre for Policy Alternatives found that millions of cubic metres of usable logs are left behind at logging sites. If fully released to the atmosphere, these logs would increase B.C.'s average annual greenhouse gas emissions by 5 per cent (more than 3 million tonnes). Regulation and incentives, combined with better reporting and oversight through government audits, would not only reduce waste and emissions but also create new jobs.

Wood products can be a climate friendly alternative to materials like concrete and steel. They store up to 20 per cent of the carbon removed from the forest after harvesting, some of them long-term. Forestry in the era of climate change has the potential to be a key part of a low-carbon economy providing new jobs, but we have to take a close look where it is done, how it is done, and how much gets logged and left behind.

B.C. must set targets and create a plan to reduce emissions from logging in the same way it did with emissions from fossil fuels. In order to avoid catastrophic climate change, it is mandatory that B.C.'s forests become carbon neutral as soon as possible. The province should reduce annual CO2 emissions from forest land (86 megatonnes in 2007) by at least 60 per cent (equivalent to the net emissions of 2007) by 2020. The remaining emissions would then be in the same range as current sequestration (34 megatonnes). The plan should also include action to increase sequestration of our forests, but it is addressing logging that promises immediate results. As with most things in life, there is no cast iron guarantee. But this would be a respectable start.