A man who was killed in Sooke two weeks ago was a client of the provincial government agency that serves children and adults with developmental disabilities, The Tyee has learned.

Jamie Joe was in his mid-20s and living in a home-share situation as part of a program the provincial government funds through Community Living BC and that is delivered through local agencies.

Clarice Quoquat, who RCMP officers arrested at the scene as a “person of interest,” had aged out of government foster care and was waiting for support from CLBC as well, according to the woman in whose home the homicide happened.

“Had either one of them gotten the supports they deserved, they wouldn’t have been in this situation,” said Karin McKenzie, who had looked after Joe for the last six years and referred to him as a son. The couple “were young and innocent and they didn’t deserve this,” she said.

Few details have been made public. According to a May 16 statement from the RCMP, the Vancouver Island Integrated Major Crime Unit was investigating the homicide, which occurred May 15.

The statement said that the victim’s body had been discovered at a residence on Throup Road in Sooke, and that a person of interest had been identified and arrested at the scene.

“Due to certain factors pertaining to this case which can’t be disclosed at this time, this person has since been released from police custody pending further investigation,” it continued.

An RCMP spokesperson said Wednesday there is no update on the case, but that the investigation is progressing well.

According to McKenzie, Joe and Quoquat became involved in a relationship starting last September. They had both grown up in Sooke, a municipality of 13,000 people west of Victoria, and both had been looked after through the government’s foster care system before they turned 19-years-old.

“They both aged out, the supports dropped off and everybody pointed the finger at everybody else and said ‘it’s your job,’ and that’s not OK,” she said. “I don’t want to see this happen to another kid somewhere or another family somewhere.”

The relationship at times included accusations of violence to the point that police and the courts had previously been involved and there had been restraining orders on both people, though not at the time that the homicide happened, McKenzie said.

McKenzie said that in the months leading up to the homicide she sought further support from CLBC through her employer, the Sooke Family Resource Society, but the requests had been denied.

“I was really reaching out for support, for a support worker for Jamie, and all they kept saying was ‘unless Jamie asks for one, Jamie can’t have one,’” she said. McKenzie also works as an educational assistant in the public school system and found she was unable to provide all the support Joe was needing.

In the months and weeks before the homicide, she repeatedly made her concerns known to the Sooke Family Resource Society, CLBC and the police, McKenzie said.

But instead of providing more support, the Sooke Family Resource Society cancelled her contract, she said. She’d worked with the agency for 12 years. “The result I got was ‘you’re fired, because you’re causing us too much trouble.’”

McKenzie said the Sooke Family Resource Society had given her notice that contracts for Joe and a second client who still lives in her home were to end May 31.

She said CLBC has told her she can look for another agency to take on the contract. The client is still living at her house, McKenzie said, despite the lack of a funding agreement.

The executive director of the family resource society, Nicky Logins, said she was not in a position to comment publicly on the case and knew little about what had happened.

“As you can imagine it’s been pretty traumatic for everybody involved including our staff here,” she said. “I don’t even really know the details of the facts of the case because we haven’t had conversations with anybody about that, it’s all hearsay and conjecture at this point.”

Logins said the agency has had no contact from the police about the matter and she understands the investigation remains open.

The agency has offered as much support to McKenzie as it could, she said. “My interpretation of our response [is it] was compassionate and responsible and professional, like we would with anybody who’s been through a trauma,” she said. “That’s the business we are in and that’s what was offered and is ongoing.”

A Community Living BC spokesperson said, "We cannot comment on the matter due to confidentiality and the fact it is under police investigation."

McKenzie said there has been little support following the homicide, either for her and her family or for the second CLBC home-share client who continues to live in her home.

“We’ve been home for two weeks and not one person from CLBC has come out to see him, has called to check on him, has even talked to me about him,” McKenzie said. “All they’re focused on is there was this incident in my house and how is that going to look.”

There were several sympathetic calls from CLBC staff, and an official did arrange a telephone appointment for her with a counsellor specializing in responding to trauma, but there was little other practical help, she said.

The cost and effort of cleaning up the large amounts of blood in her home after the homicide were left to her and her family, for example. “I just felt very dismissed when it came to discussing anything to do with money. They just didn’t want to have that conversation.”

“I get that is partly my job too, but I was in trauma too and I think they just had this expectation that I would just carry on without any... hiccup to the service,” McKenzie said. “There just could have been a lot more compassion.”

Being a home-share provider is a job unlike other jobs.

Providers like McKenzie are paid a monthly stipend based on the severity of the client’s disabilities to look after the person in their home and generally care for them as part of the family. For Joe, McKenzie received a $716 disability payment for him plus a stipend of $1,585 each month.

There are about 4,000 home-share providers looking after 4,200 people in the province through the program.

“You’re responsible for them, but you aren’t in charge of them, because they’re adults,” McKenzie said. “You can guide them, you can support them, you can direct them, but you cannot take their money or tell them how to spend their money. You can make rules and say these are the house rules and you have to abide by them, but if they choose not to, you can’t lock them out and not let them come home.”

She added, “It’s just like having a teenager for the rest of their lives.”

McKenzie said that if there was a killing in a more traditionally regulated workplace, such as a group home, there would be a lot more institutional support. 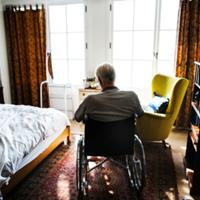 “If something like this had happened in a facility, where I had to go to, there would have been a heck of a lot more involvement in cleaning it up and fixing it and helping and supporting and providing,” she said. “I probably would have got some time off work.”

She added, “When you put it in that perspective, to just do nothing, not even come out here, not even check on their other client that lives here, I just don’t know how that’s allowed.”

She said she feels like she is being blamed for a situation that had many, many contributing factors, and believes she's likely to have the surviving CLBC client removed from her home. He's been with her eight years.

Pointing out that CLBC is self-governing and investigates itself, she said she has little faith the Crown corporation will look closely at what went wrong and what they might have done differently.

“They’re not going to fix any of the holes.”