As mysteries go, they don’t get much bigger.

Reaching lengths of up to 20 metres, fin whales are the second-largest creature on Earth. These behemoths live largely offshore and spend much of their time feeding on krill, squid and small fish in the open ocean. But on the north coast of British Columbia, a globally unique population of more than 100 fin whales frequents the Kitimat fjord system, navigating the myriad deep trenches that wend through the Great Bear Rainforest, and sometimes swimming within 20 metres of shore.

This is considered to be the only fjord system in British Columbia or elsewhere that fin whales regularly inhabit.

The mystery is, why?

A new collaborative study based on 15 years of research has set out to answer this question. Led by Eric Keen, science co-director with British Columbia’s North Coast Cetacean Society, the research team has explored the confluence of factors that makes the Kitimat fjord system so uniquely inviting to these gigantic whales.

For one, the scientists note that the coastal, enclosed and inland habitats in this fjord system are more dynamic and productive than open ocean ecosystems. Strong bottom currents and features on the seafloor cause nutrients to upwell, supporting vast numbers of zooplankton for the whales to eat.

The complex twists and turns of the glacially carved channels that comprise this fjord system, some of which are as deep as 700 metres, may make the fin whales feel more comfortable than in other inlets, Keen suggests, since they offer multiple options for escape from predatory killer whales.

Adding to the mystery, commercial whaling is thought to have extirpated fin whales from the fjord system in the 1960s. Whaling records show that of the 24,862 whales slaughtered on the B.C. coast from 1908 to 1967, a total of 129 individuals, or 0.5 per cent of the total, were taken at or near the fjord system. Nearly 100 of those were fin whales.

With their numbers depleted by whaling, fin whales were not observed in the fjord system again until 2005. Since then, however, the local population has rebounded to between 100 and 120 individuals as the whales have started to reclaim their former home. Most of these whales visit from June to October. Just over half travel in groups of two to 12, while the rest swim alone.

This points to another explanation for what may be drawing the whales to the fjord system. Fin whales, Keen and his collaborators say, may also be attracted to the fjord system by the area’s remoteness and lack of human impacts. The region is free from intensive boat traffic, which limits underwater noise and ship strikes, and features relatively little pollution, coastal development and habitat degradation.

But that is about to change.

The construction of a new LNG export terminal and a number of other proposed industrial developments in the Kitimat region mean that the whales’ nirvana could soon be threatened once more.

According to the study, if all proposed shipping projects currently under review go forward, large vessel traffic through the area will increase 13-fold.

Joe Gaydos is the science director with the SeaDoc Society and was not associated with the study. Gaydos says it is gratifying to see fin whales, including mothers and calves, making a comeback to the area post-whaling.

But he also cautions that fin whales are known to be particularly vulnerable to ship strikes, especially in confined coastal areas.

“When you get animals feeding almost perpendicular to a shipping lane, there’s a good chance of making contact with a boat,” says Gaydos. “It allows them to get T-boned. These are giants, right?” 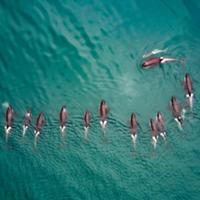 Tracking Orcas with Tech: ‘The Images Took Our Breath Away’

A complicating factor is that because of their ongoing recovery, scientists with the Committee on the Status of Endangered Wildlife in Canada recommended that the federal government downlist the status of Pacific coast fin whales from "threatened" to "special concern."

Threatened status prohibits the destruction of a protected species’ critical habitat, along with other measures, while special concern requires only the drafting of a management plan, the report notes.

Currently, the Canadian government is weighing the recommendation.

Keen is concerned that downlisting the species based on the fin whales’ relatively abundant overall numbers could minimize protection for the few that frequent the fjord system.

“The legal teeth to enforce protection in the coastal area where most of the impacts are concentrated will be undermined,” he says.