The latest child poverty report card for British Columbia shows a slight decrease in overall rates, slipping from 18.5 per cent of kids living in poverty in last year’s report, to 18 per cent this year.

But new data included in this year’s report, which relies on 2019 Statistics Canada tax-filer data, the most recent data available, shows income inequality among parents with children under 18 is growing.

This measure does not include family assets like real estate and stocks, which could even further divide B.C.’s richest and poorest families.

The report shows the richest B.C. families with kids earned 24 times what the poorest did in 2019. But the inequality was particularly stark for single parent-led families, where the top earners brought home 54 times the income that the poorest single parents did.

The report divides income earners into 10 levels or deciles, with the 10th being the highest earners and the first being the poorest.

“The real inflation in that gap is the highest decile. So there are some very wealthy families with children in this province who far outstrip the incomes of the ninth or eighth decile of income,” said Adrienne Montani, provincial co-ordinator for First Call Child and Youth Advocacy Society, which put out the report in collaboration with SPARC BC and Campaign 2000.

In comparison, only 10 per cent of households with two parents were living in poverty in B.C. in 2019. Looking specifically at children, 55 per cent of poor children in B.C. live with single parents, while 45 per cent have two parents at home.

Eighty per cent of all single-parent families in B.C. are led by women, and for the first time the report showed income breakdowns between male and female-led single parent homes.

The median income for all female-led single families was $46,990 in 2019, about 70 per cent of what the median single dad income was at $66,830. In fact, at all income brackets single dads earned thousands to tens of thousands of dollars more annually than single moms.

For all low-income single families, the incomes were even smaller, with a median income of just under $25,000 for a single parent with two kids — $14,000 below the poverty line for a family of that size.

“The big secret is that the majority of children in poverty in British Columbia are in poverty because their mothers are in poverty,” she said. “It is mothers’ poverty that we need to tackle to shift the dial.”

In an emailed statement, Nicholas Simons, minister of social development and poverty reduction, said one child living in poverty is too much. But the number of kids living in poverty in B.C. has been steadily decreasing since 2017.

“I am very pleased that many steps we are taking as a government reflect the priorities identified in the report, including strengthening employment standards, introducing sick leave, increasing the minimum wage, improving access to child care and raising social assistance rates,” he said.

Simons noted the 2019 data doesn’t take into account the government’s $175 increase to monthly welfare and disability rates introduced in the spring, which benefited 300,000 people, including 49,000 children.

The ongoing COVID-19 pandemic and its associated job losses are likely to make the situation even more dire for families with young children in the future report cards showing 2020 and 2021 data.

Government data already shows that women, people working for minimum wage and racialized people were hit the hardest by job losses and were less likely to find more work than men overall. This includes families with children under 18, particularly those who depended on child care to be able to work.

“If child care was closed for a while, or they were scared to send their kids to child care or they lost their job and couldn’t afford anything, all of that will definitely have an impact,” Montani said.

The report card comes with 26 recommendations to eliminate child poverty in the province. To close the income inequality gaps specifically, Montani points to: 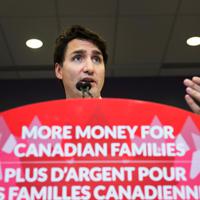 She said that legal aid must fully fund services for family law, as a number of women become low-income single mothers after escaping violent partners. This is the subject of a constitutional challenge by the Single Mothers’ Alliance that is set to go to court in 2022.

Ellis noted that parents without legal status who had babies in Canada are not able to access federal or provincial child benefits that helped lift over 66,600 B.C. children out of poverty in 2019.

She said the province must put a gendered lens on its poverty reduction initiatives and focus on the reasons that women enter and stay in poverty.

“We absolutely have an opportunity to address this now, particularly with our federal government investment in feminist pandemic recovery response work,” she said.

“And I believe it’s through the work we’re doing now around the feminist pandemic recovery that we can also tackle a lot of policy that needs to evolve, that has been contributing to the child poverty rate in B.C.”