Except for one giant, costly and shameful failure in leaving more than 40,000 children in poverty.

The increase disappointed people who hoped the government would reinstate a $300-a-month emergency pandemic increase in place from April to December.

But Nicholas Simons, the minister of social development and poverty reduction, correctly noted the $175 monthly bump is “the largest single increase in the history of British Columbia” and requires $400 million in new spending.

While people on income and disability assistance will still face desperate poverty, it’s less desperate. And in four years, the NDP government has increased rates by $320 a month, or 31 per cent for a single person on disability assistance. That’s in sharp contrast to the former BC Liberal government’s contempt for people on assistance, reflected in its refusal to increase rates for a decade.

But while less desperate poverty might be a tolerable goal for adults, it should not be acceptable for the 42,000 children who continue to live in poverty because their parents depend on government assistance.

A single parent on income assistance raising a child gets, with the increase, $1,271 a month for housing, food and all other expenses. That includes up to $570 a month for housing. There is nowhere in the province where a parent and child could rent a safe, acceptable apartment for that amount. (MLAs should know that. They’ve decided they can claim $1,833 a month — three times the rate the single parent receives — to rent a second residence in Victoria.)

Single parents on disability assistance do slightly better at $1,694 a month.

There are other supports, most notably the BC Child Opportunity Benefit, which provides $1,600 for the first child in a low-income household.

StatsCan’s poverty line in 2018, which is considered the cost of “a modest, basic standard of living” for a single-parent family, was $33,308.

It’s not just single parents. Two parents, both on disability assistance, with two children, will receive $29,164. StatsCan says the family needed $47,111 in 2018 to live above the poverty line in B.C. communities with more than 100,000 population. Even with the federal Canada Child Benefit, they remain far below the poverty line.*

The government has decided that all these children should live in deep poverty.

For some, their period of deprivation might be brief as a parent recovers from an illness or a struggle to find a new job.

We intend income and disability assistance as the basic safety net for individuals and families. And we set supports at a level that is deeply damaging for children.

They are the kids who show up for school hungry, who wear clean clothes only when there is extra money. They’re the ones who don’t talk about weekend activities or visits with friends. They’re the ones who struggle to learn, not because they’re less able, but because they’re malnourished, haven’t had opportunities and find the whole school experience overwhelming and exclusionary.

We love a rags-to-riches story, the kid from a poor family who cashes in on an invention or launches a business. But the reality is usually rags to rags.

Childhood poverty is a lifelong curse. The largest factor in adult health, for example, is not whether you smoke, or exercise or even your genetics. It’s whether you lived in poverty as a child. Living in poverty as a child limits your educational opportunities and achievements, reduces your employment prospects and, as a result, limits the future for your children in turn, if you have any.

Those consequences don’t just affect the children’s lives. We all pay for the increased costs to the health-care system and other social supports and in the lost contributions of people who never had the chance to make the most of their abilities and interests. 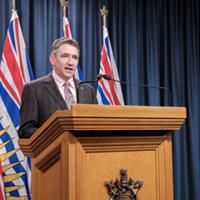 BC Boosts Income Assistance, Disability Benefits by $175 a Month

But the economic benefits of improving life for children shouldn’t be the main factor in offering children being raised on assistance a fair life, not one of deprivation. This is a moral issue.

Imagine the lives of parents trying to deal with life on assistance. The fear, the guilt, the daily struggle, the knowledge that despite their best efforts their children were suffering.

The B.C. government’s poverty reduction plan report card said there were about 60,300 children living in poverty in 2018.

The fact that more two-thirds of them faced desperate lives because of government policy should shame us all.

*Story updated on March 25 at 11:00 a.m. to add information on federal child benefits.