COVID-19 cases appear to have stabilized or decreasing in most parts of British Columbia, but more than 450,000 people who have chosen not to be vaccinated remain at much greater risk of illness and death.

And an unvaccinated individual’s risk of death is 46 times greater than someone their age who is fully vaccinated.

“The difference is stark,” said provincial health officer Dr. Bonnie Henry. “It is in a predominantly unvaccinated population where we are seeing case rates take off.”

About 9.9 per cent of eligible people — those 12 and over — are unvaccinated, but they accounted for 60 per cent of new cases in October, and 72 per cent of people in hospital.

Just under half of the 179 people who died in October were unvaccinated, Henry said, and six per cent had a single shot.

The remaining 46 per cent of deaths were among people who had two shots, the vast majority of whom were over 80.

Vaccines are safe and effective at preventing serious illness in all age groups, Henry said. But the single greatest risk factor for illness and death continues to be age.

Henry stressed the importance of booster shots for older people and those who are immunocompromised. The province has begun rolling out boosters for people in long-term care and those over 70.

About 90 per cent of people 12 and over across the province have had at least one dose of vaccine.

But areas in the Northern, Interior and Fraser Valley health authorities continue to have low coverage and, as a result, high transmission rates, Henry said.

Analysis from the independent BC COVID-19 Modelling Group show communities with just 75 per cent of people vaccinated have four times the number of cases than communities with 95-per-cent vaccine coverage.

The vaccination-rate difference is most dramatic among those under 50, who in some parts of the North lag the provincial vaccine rates of their peers by up to 20 per cent.

“The Delta virus is spreading more easily and causing more severe illness in younger people, and particularly those who don’t have the protection of immunization,” said Henry. 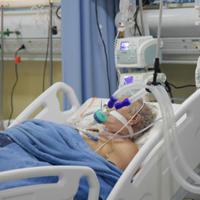 The North has seen more than 100 people in need of critical care transferred to hospitals in other health authorities due to an influx of mostly unvaccinated COVID-19 patients in its hospitals.

Currently, 480 of the province’s base 510 critical care beds are being used, about 137 of those by COVID-19 patients.

Health Minister Adrian Dix said “the vast majority of people who have been transferred are dealing with COVID-19.” It is frustrating, he said, because with a vaccine “it is preventable.”

Mask mandates and other measures helped stabilize cases, according to Henry, and won’t be lifted while hospitalizations remain high.

The independent modelling group also noted cases will continue to decline as people build immunity from vaccination, and children under 12 become eligible for vaccination in the coming weeks and months.

“This is not the time in any way to let off what we are doing to protect our families and our communities,” said Henry.