Thousands of British Columbians who were hospitalized due to COVID-19 are likely returning to the emergency room or even requiring readmission within a month after being released.

But the province doesn’t track the additional strain on B.C.’s beleaguered health-care system.

As COVID-19 hospitalizations continue at an all-time high, mainly with unvaccinated patients, two experts say tracking this data is essential to supporting recovered patients through the long-term impacts of COVID-19.

“We absolutely do want to have that data, and I don’t think systematically it would be that hard to obtain,” said Dr. Chris Carlsten, a respiratory specialist with the post-COVID recovery clinics offered as part of the provincial response to the pandemic.

The four clinics, all in the Lower Mainland, bring together specialists from all areas to provide co-ordinated, individualized care to at least 2,700 people experiencing Long COVID symptoms in B.C.

The Globe and Mail reported that Alberta statistics from July showed almost 80 per cent of COVID-19 patients who had required hospitalization sought additional treatment at the emergency department within a month.

Seventeen per cent of previously hospitalized patients were readmitted to hospital within a month, Alberta Health Services told the Globe.

If those numbers held for the more than 1,300 people hospitalized in B.C. in September, that would mean about 1,064 of those patients have sought hospital care since being discharged and 226 of those were readmitted to hospital.

“It’s bad news if anything like what is happening in Alberta is happening here,” said Carlsten. “If people are coming to the ER rather than a clinic, that’s not the best way to provide care to these patients.”

Provincial health officer Dr. Bonnie Henry revealed in September that the people who are no longer infectious aren’t counted as COVID patients even though they remain in hospital.

The number is about 200 patients — including those who have been readmitted.

The information was only publicly reported in late September, after CTV pushed for the numbers to be released.

“At least a third of the people that we're talking about are people who were in hospital, discharged more than a month earlier, and have come back into hospital… sometimes for complications, from other illnesses, or for other reasons that may not have anything to do with COVID,” said Henry on Oct. 19. “So we're trying to sort that out.

“We don’t have a simple single IT system that we can look at this in an easy way.”

In an emailed statement to The Tyee, a spokesperson for the Health Ministry said that while information about previous COVID-19 illness is collected by hospitals, it is not tracked in a reportable way.

The difficulty in reporting these cases, the spokesperson said, is compounded by the fact it’s difficult to determine if admission is due to pre-existing conditions or other health issues unrelated to COVID-19.

“Daily data captured on patients who are hospitalized or rehospitalized after they are no longer infectious with COVID-19 does not contain sufficient clinical information to be able to distinguish between hospitalizations due to other co-morbidities and admission to hospital that may be related to COVID-19 consequences,” read the statement.

Carlsten said rehospitalization numbers are yet another example of an important metric the province says it can’t track even though other regions are producing the same data.

Without that data, tracking the impact of Long COVID and planning to address it will be almost impossible, he said.

Symptoms of COVID-19 that persist for months after recovery from an infection are estimated to affect between 10 to 30 per cent of those who recover from the disease.

In B.C., that could mean as many as 60,000 people are struggling with COVID-induced shortness of breath, fatigue, brain fog, loss of taste and smell or dozens of other symptoms linked to Long COVID.

But the 2,700 referrals received by the four post-COVID-19 recovery clinics in B.C., which only recently received provincial funding and support, represent just 1.4 per cent of recovered people.

About a quarter of patients who receive ICU care for any condition requiring rehospitalization in a year.

Last year, two University of British Columbia researchers called on the province to develop a long-term strategy to prevent patients with post-intensive care syndrome or Long COVID from ending up back in hospital.

“If we have patients who develop PICS, including COVID-19 survivors, and who aren’t getting care they need in their community, and they’re being sent back to hospital, it’s a greater burden on them and on the system,” said Dr. Fuchsia Howard, an assistant professor at the UBC School of Nursing. “We’re vulnerable to that.”

Carlsten said he’s concerned post-COVID patients aren’t getting the care they need because of the lack of information. “I’m worried in the sense we want to see everyone and take care of everyone.”

Knowing how often and where people with post-COVID symptoms are presenting could let health authorities provide resources where they are most needed and build the case for more recovery clinics throughout the province.

Henry has said management of PICS and Long COVID is also not tracked by the province and care is led by a patient’s family physician. About 17 per cent of British Columbians don’t have a family doctor.

That means the emergency department is where many seek care, Carlsten said, which is not the best way to manage their symptoms or support a fuller recovery or better quality of life. 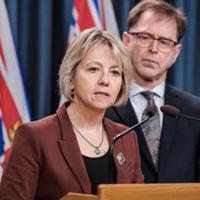 Why BC Needs an Independent COVID Science Group

Working in the clinics, Carlsten has been surprised at just how individualized each patient’s recovery plan has to be. Teams of specialists work together to tailor plans to patients presenting with breathing, heart, nervous system and mental health issues, to name a few, but everyone presents differently.

“The degree to which this has moved beyond a respiratory disease is not totally unexpected, but we didn’t know until we’ve had this amount of time to study survivors,” said Carlsten.

And as the recovery clinics look to expand to other parts of the province and work directly with family doctors to support patient care, Carlsten says the more information they have about what recovery for each patient means, the better.

“With more information and with the resources we have, we’d be in a better position to give individualized health care given the massive scale of the problem,” he said.