For possibly the first time ever in Canada, a free legal guide for queer, trans and two-spirit people has been developed and released in British Columbia.

The guide Knowing Your Rights: A Toolkit for 2SLGBTQIA+ Folks In Navigating Criminal Justice, Health Care and Youth Issues, available for free online, covers everything from sexuality and gender charter protections to the right to gender-affirming medical care, legal accommodations, how to find a lawyer, and medical privacy rights for youth under 18.

It also provides the provincial forms for changing your name, making a complaint to the BC Human Rights Tribunal and filing a complaint against the RCMP.

“Getting this information can be quite difficult and traumatizing for people depending on what’s happening,” said Ashton O’Brien, incoming president of Kamloops Pride, who uses they/she pronouns.

As someone who’s changed their legal identification, O’Brien says they know how hard it can be to track down information included in the guide. “This is great because it just lays it out there, and there are links for where you need to go. It takes out the labour of having to search for that,” she said.

There are even more serious reasons for the guide. Hate crimes against LGBTQ2SIA+ people are on the rise in Canada, and conversion therapy is still legal in this country.

With roughly 30 per cent of the LGBTQ+ population in Canada between 15 and 24, Statistics Canada findings show the annual average earnings for LGBTQ+ people at $38,000 — $21,000 less than their straight, cisgender peers. Which makes it difficult to access expensive legal services.

Kamloops Pride partnered with the Thompson Rivers University law school’s chapter of Pro Bono Students Canada to create the guide, after Grace McDonell, a lawyer and TRU graduate, spoke with the Pride organization about the onslaught of legal questions they receive from the LGBTQ+ community.

“We thought, ‘Wouldn’t it be great to have some kind of guide or resource available to the community?’” she said. “Kamloops Pride drafted up basically their wish list of questions to be answered, at least for the first year, and we joined forces from there.”

McDonell introduced Kamloops Pride to the TRU pro bono chapter, which then recruited six law students to the project. The students took on the work in addition to their studies.

“Kamloops Pride graciously gave me a very long leash to decide what we could at least fit in, and the students found it really worthwhile,” McDonell said. When they presented the first draft to the board, she said, several board members became emotional. “I think the words used were, ‘Life-changing to many people.’”

Alexandra Comber was one of the six students involved, along with Sydney Snape, Abbey Fortin, Katelyn Chaudhary, William Clark and Erin Pillipow. She wanted to work on the guide to help her friends in the queer and trans community “know their options when they are discriminated against by the health-care system or the police,” for example, or to “help students navigate their rights with teachers and the school system,” she said.

Comber, who’s previously worked in biomedical research, worked on the health-care rights section. While she hasn’t settled on an area of focus in law, Comber said she hopes to continue pro bono projects like this one throughout her career. 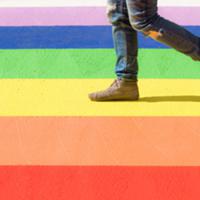 “In the legal community, there’s a real asymmetry of knowledge,” she said, adding that lawyers are often separated from the grassroots queer and trans organizations because hiring them costs a lot of money.

But it is these organizations, often underfunded, who are fielding legal questions from the LGBTQ+ community they serve. “There needs to be other ways for people to get this information easily, and I think this is one of those ways,” Comber said.

Eventually, McDonell hopes that paper copies of the guide will be shared with public libraries and schools across B.C., saying they’re in the process of applying for a grant to cover the costs. The digital version can be found through the Kamloops community centre, Elizabeth Fry Society and Qmunity, the B.C. LGBTQ+ resource centre.

A second edition of the 174-page guide with more information on legal issues surrounding immigration, education, tenancy/housing and family law is slated to be released mid-summer 2022. Twelve new Thompson Rivers University law students are already working with McDonell on the research.