Having a visibly supportive and inclusive community can drastically reduce the number of LGBTQ2S+ youth who have suicidal thoughts or consider self-harm, a new B.C.-based study suggests.

And support can look like everything from a rainbow sticker in a coffee shop window to a community space for LGBTQ2S+ youth to gather after school.

“Ultimately what we found was that community resources and supports actually do contribute to reducing, or at least to lower odds for suicidal thoughts, among LGBTQ girls,” said Elizabeth Saewyc, director of the University of British Columbia school of nursing and executive director of the Stigma and Resilience Among Vulnerable Youth Centre.

“And when you’ve got the signs and symbols that say, ‘Hey, we support these human rights, we see you, we support you, we celebrate you, you matter to us,’ then that’s really an important way of sending signals to young people and help them feel safe and included.”

Data from the Adolescent Health Survey shows that 38 per cent of adolescent queer girls and 34 per cent of boys had had suicidal thoughts in the last 12 months, with nearly half of all queer girls reporting self-harm practices in that time frame.

The study goes beyond looking at school or family supports and considers how and why youth feel supported in their broader communities in B.C. to identify ways communities can improve queer youth mental health.

Saewyc, the lead author of the study, asked youth where they feel welcome and included, and the research team spent hours walking with them to learn about why these spaces and symbols mattered.

They then used a Google search to map the resources available in 274 communities across B.C., based on the way youth may seek support or research inclusive spaces.

And much of what youth came up with hadn’t previously appeared in the expert literature.

“Young people were talking about pride stickers and rainbow flags in cafes and restaurants and messages in faith communities, and they also talked about anti-bullying events or Trans Day of Remembrance events and Pride parades,” said Saewyc. “Hearing those, in addition to youth groups and drop-in programs and LGBTQ friendly services, helped us understand a broad array of different kinds of support in communities.”

Girls in communities that voted 70 per cent NDP in the 2013 provincial election were less than half as likely to have suicidal thoughts as those in communities where very few did.

“If you’re looking at political climate as a proxy for progressive, supportive climates, then you need to look at which parties actually have the kind of platform or have been calling for the kind of supports that contribute to well-being for LGBTQ youth,” said Saewyc.

But the availability of services or supports did not have as significant an effect in reducing self-harm among queer boys, which Saewyc says suggests they may need different supports. As well, supports for girls may reduce the impact of both gender and sexuality-based stressors, providing a greater overall gain in their well-being.

But Saewyc stressed that supporting youth isn’t just about votes and rainbow crosswalks. 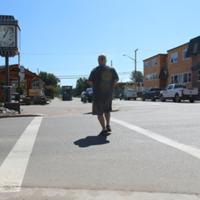 Is It the End of the Rainbow for Smithers?

“It’s not enough to say, ‘Oh, well, we just have to put a bunch of rainbow flags around our city and we’ll be fine,’” she said. “You actually have to do the work to make sure that people are supportive and know how to be inclusive and supportive and encouraging of young people.”

She hopes the study, a collaboration with American researchers, will help support communities to take actions of all kinds to support queer youth, knowing that every small thing makes a difference.

“We’ve also ended up coming up with a bit of a blueprint of all these different strategies that a community can consider,” said Saewyc.

“So the next time a small community is thinking, ‘Gee, should we do a rainbow crosswalk?,’ rather than saying, ‘Well, we don’t think it’s gonna hurt,’ we’ve got evidence that suggests as part of the broader community, it contributes to helping LGBTQ youth feel safer and included.”