How much is a thriving ecosystem worth?

How do you do a cost-benefit analysis of healthy salmon stocks, flood prevention, bird watching, carbon sequestration or the ability of eelgrass to filter pollutants from the marine environment?

How do you place a dollar value on something that is, in fact, priceless?

A new report attempts to do just that by placing a monetary value on natural assets in the Squamish River estuary, tallying local and global benefits, direct economic contributions derived from use, and the value of not using some resources at all.

Its conclusion: The Squamish River estuary is worth over $12.6 million a year.

For the record, that’s roughly equal to 10 single-dwelling Vancouver homes, a luxury yacht, Drake’s car collection or a dead shark.

Clearly, placing monetary value is tricky business. So why attempt to try and place it on something as invaluable as nature?

“This is just a way of starting the conversation about understanding and valuing nature, not only for its beauty and how it nourishes our soul, but also its inherent monetary value and its function,” says Patricia Heintzman, spokesperson for Squamish River Watershed Society. “It’s so complex that we haven’t even begun to figure out how to actually put a real number on that.”

The society released the report, called “Natural Capital Assets: The Squamish Estuary” last month in partnership with the Squamish Nation, the Healthy Watersheds Initiative and the Fish and Wildlife Compensation Program.

It itemizes things like habitat, fisheries, clean water and carbon storage in an attempt to value natural capital and raise awareness of the important role natural assets play in the wider ecosystem.

The organizations hope the document will provide a starting point for a larger discussion about the health and value of the estuary, Heintzman says.

“The challenge, I think, is to express the complexity and the interdependence of it, but unfortunately the way we currently analyze and study this kind of thing isn’t fully developed,” she says. “It’s an emerging new economic science.”

Estimated at almost 150 hectares — equal to 200 soccer fields, Heintzman notes — the estuary runs roughly five kilometres along Squamish’s western flanks. The community is known as a destination for things like fishing, water sports and birding.

The estuary itself provides a home for wildlife like juvenile salmon, river otters and seals, along with bird species that include great blue herons, eagles, turkey vultures, trumpeter swans and purple martens.

It also provides global benefits in the form of carbon capture and sequestration.

The estuary was altered back in the early 1970s, when an attempt to build a deep-sea coal port resulted in the construction of a dike meant to divert the Squamish River. The port never happened — the environmental assessments found the estuary was being greatly undervalued, Heintzman says — but 50 years later, the remaining berm continues to impact the estuary.

“In the past, natural assets have not been viewed equally to engineered assets, nor have they been included in financial management plans,” the report says. “Like any asset, natural assets need to be carefully protected and managed to ensure a sustainable supply of services.”

The report attempts to value the goods and services provided by the estuary by tallying costs for each asset’s use, indirect use, future use and value when not used as all — for example, protecting a species at risk.

It divides natural resources into ecosystem goods (quantifiable things like fish and water) and ecosystem services, such as flood mitigation and carbon sequestration.

According to the report, the ocean’s vegetated habitats are among the most productive carbon sinks on the planet, with aquatic environments like estuaries sequestering carbon at 90 times the rate of forested areas. It places the value of carbon storage and sequestration at over $60,000 a year.

Past flooding has cost residents tens of millions of dollars, the report notes, and climate change is increasing risks. An intact estuary ecosystem acts as a buffer, estimating the estuary’s value for “disturbance regulation” at between $1 million and $5 million per year.

Although the report recognizes the estuary’s “significant value for the Squamish Nation since time immemorial,” it does not attempt to put a dollar value on it, simply labelling the value “unknown.”

No one from the nation was available to comment. However, the report recognizes the shortcomings of placing dollar value on cultural assets.

“By identifying culturally significant sites, using archaeological techniques, other Indigenous values have been lost,” it says. “There are currently limited methods to evaluate Indigenous cultural and environmental values, so they are likely being undervalued.”

It says a First Nations Cultural Assets Tool is being developed to better assess Indigenous values. 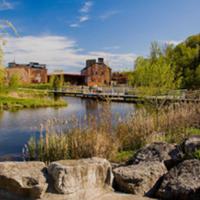 In recent decades, attempts have been made to rehabilitate the Squamish River estuary, Heintzman says. Most recently, the Central Estuary Restoration Project has worked to restore fish habitat, tidal connectivity and the estuary’s overall function. For example, Chinook salmon in the estuary once numbered 15,000 a year. That plummeted in the 1980s to about 500 a year but has rebounded to 5,000 a year with restoration work.

That restoration not only creates an argument for investing in the estuary; it indicates that its value is appreciating, Heintzman says. “This is absolutely a living document,” she says about the recent report.

Heintzman also admits that there’s a potential downside in placing monetary value on the estuary.

“But at the same time, we don’t have any conversation about the value of nature now, and if you just simply say something is priceless, then it often actually devalues it,” she says.