The COVID-19 fourth wave is hitting homeless and underhoused people across the province hard, according to B.C.’s provincial health officer, and it’s becoming increasingly difficult to find places where unhoused people can isolate if they’re infected.

Dr. Bonnie Henry said it’s a problem not only in Vancouver and Victoria, but in smaller cities like Kelowna, Kamloops, Duncan and Nanaimo.

In 2020, restrictions to control the spread of COVID-19 meant that travel ground to a halt, hotels were virtually empty, and governments were able to easily book rooms so vulnerable people could isolate while they recovered from the illness.

With the easing of travel restrictions, that’s become much more difficult, Henry said.

In Vancouver, the Centre North local health area has had the highest rate of COVID-19 cases in the city for the past five weeks, data from the BC Centre for Disease Control shows.

Centre North includes Vancouver’s poorest neighbourhoods — the Downtown Eastside, Strathcona and Chinatown — where many people live on the street, in homeless shelters or in single-room occupancy hotels with shared bathrooms where it’s impossible to isolate from other residents.

Henry said Vancouver Coastal Health has been working with BC Housing and service providers in the Downtown Eastside to find options for people who test positive for COVID-19.

“In some cases that has meant people isolating in place, whether that’s in the shelter or in their own room,” Henry said.

She added that many people who are unhoused or underhoused have underlying health conditions, and they’re more likely to be hospitalized if they get sick with COVID-19.

“We are seeing the impacts of that in hospitals, in Kelowna, in Kamloops, in St. Paul’s in [Vancouver], in Victoria as well,” Henry said.

Recently, Capital Daily reported 225 cases among people who are homeless or who live in shelters in Victoria, based on leaked documents dated Sept. 20.

The same documents showed nine of those people were in hospital.

VCH said six resident and one staff member have tested positive for COVID-19, and one of those residents has died.

Because of the outbreak, the health authority said no visits and no transfers are currently allowed at Cooper Place and all symptomatic or “potentially exposed” residents are being tested.

In January, Vancouver Coastal Health began a months-long effort to vaccinate vulnerable residents in the Downtown Eastside by offering weekly or even daily walk-in clinics, going door to door in some buildings and offering small cash payments to persuade people to get the shot.

Henry said VCH is continuing to make efforts to vaccinate people in the Downtown Eastside.

Vancouver Coastal Health acknowledged the increase in a statement to The Tyee.

“As in other communities in the Vancouver Coastal Health region and throughout the province, there has been an increase in cases of COVID-19 identified in the Downtown Eastside during the fourth wave, although the level is not as high as seen in previous waves,” it said.

The health authority said it had identified the neighbourhood as especially vulnerable early in the pandemic.

“People who live in congregate settings like shelters and in SROs with shared bathrooms and kitchens are more likely to get COVID-19 or give it to others because it is difficult to fully self-isolate,” the statement said. “Many residents of this community also have underlying health conditions that make them more likely to experience serious disease and hospitalizations.” 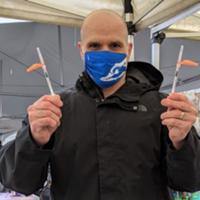 The authority is to provide one or two community vaccination clinics each week and “daily outreach at targeted sites.”

“As in other communities and jurisdictions, the majority of new cases identified in this community each week are among people who are not vaccinated.”

The statement said the higher number of cases might reflect higher levels of testing in the neighbourhood.

“In the Downtown Eastside, we have mobile testing vans that go out daily to undertake testing in higher risk settings, while testing in all other local health areas in Vancouver is largely passive, relying on people with symptoms to seek out a test.”