COVID-19 vaccination clinics are continuing to pop up in the Downtown Eastside as public health workers try to offer as much protection as possible to people who live and work in the vulnerable neighbourhood.

The vaccination clinics have set up at locations like the Carnegie Centre, the Downtown Eastside Street Market, the Japanese Hall and the corner of Main and Powell.

But peer workers and nurses have also visited single-room occupancy hotels in an attempt to offer the vaccine to as many people as possible. In some cases, health-care workers have even made house calls for people unable to leave their rooms.

“If somebody had an issue and couldn't move from their room, we would go to their room and vaccinate them as well and then we’d have to wait outside the door for 15 minutes to make sure they were OK,” said Guy Felicella, a peer clinical advisor with Vancouver Coastal Health.

“VCH has really done well in meeting the community exactly where they're at.”

Vaccinations started in the Downtown Eastside in January, and Vancouver Coastal Health stepped up efforts at the end of that month and has been holding vaccination clinics that don’t require an appointment.

Locations are somewhat unpredictable, with community members often turning to social media like Facebook to ask whether vaccines will be available and where.

The strategy, says Felicella, is to target areas with heavy foot traffic and near buildings that have had a cluster of COVID-19 cases. As a peer worker with the VCH vaccination team, Felicella’s role is to connect with people and answer their questions about the vaccines.

“They want to talk to not only a nurse, they want to talk to somebody who’s been down there as well. So it's a good kind of combination,” said Felicella, who lived in the Downtown Eastside for years, formerly used drugs and has experienced homelessness.

“They feel very comfortable in opening up and asking questions.”

One of the most common questions Felicella gets is “have you had the vaccine?” Being able to answer yes is often enough to convince people to get the shot, he said.

Vancouver Coastal Health has made an effort to vaccinate people in the Downtown Eastside because people from the neighbourhood who get COVID-19 are more likely to get very sick and need to be hospitalized. A small number of residents have died after contracting the virus.

While the province’s vaccination plan has prioritized seniors living in long-term care and older people living in the community, health authorities have stepped in to vaccinate communities or groups where cases are surging, like the city of Prince Rupert and school staff in Surrey.

People who live in the Downtown Eastside often have multiple health conditions that increase their risk from COVID-19. Many residents live in deep poverty in cramped SRO rooms with shared bathrooms. Many others are homeless or stay in shelters. There have been fears the virus could easily spread in SROs, tent cities and shelters.

In early March, the neighbourhood was hit with an increase in COVID-19 cases as well as a dangerous outbreak of shigella, a bacteria that causes dysentery, which hospitalized over a dozen people.

Over the past two weeks, numbers in the local health area that includes the communities have dropped back down. But case numbers across the province continue to grow, and there are worries about growing numbers of cases of virus variants that are more contagious.

Horace Daychief got vaccinated on Friday at 312 Main St., an office building that houses many of the non-profit organizations that work in the neighbourhood. Daychief is a Megaphone magazine vendor, but he said he’s been trying to protect himself from the risk of getting COVID-19 by mostly staying at home. 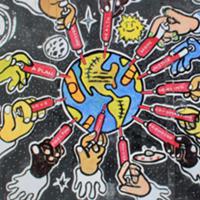 After getting the first dose of the vaccine, Daychief said he felt “like superman.”

“The fear has gone away,” he said.

Felicella said there have been a small number of people who don’t live or work in the Downtown Eastside who have tried to jump the line by coming to one of the pop-up clinics.

And while his social media posts about the vaccinations have gotten lots of positive attention, some people have messaged him to complain they don’t want the taxes they pay to go towards vaccinating homeless people.

“I'm like, ‘Look dude, you're not even at risk, wait your turn’ — everybody's got to wait their turn,” he said. “These people are at severe risk.”