Organizers of an annual event that delivers thousands of dollars to low-income recycling collectors are disappointed their event was moved at the last minute so a film production could use Victory Square Park.

Filming on the Netflix movie The Mother, starring Jennifer Lopez, has already started at the downtown park and will take 16 days to complete.

The Binners’ Project has run the Coffee Cup Revolution event at the downtown park since 2014, although the event had to be cancelled in 2020 because of the COVID-19 pandemic.

During the event, binners — people who collect used bottles, cans and other items to redeem the recycling refund — bring coffee cups they have gathered to Victory Square. The binners exchange their collected coffee cups for a 10-cent-per-cup refund, similar to the refunds already available for bottles and cans.

This year, organizers were set to return to Victory Square for the Oct. 7 event, and had set a goal of collecting 100,000 disposable cups — meaning a total of $10,000 would be returned to the binners who collected the cups.

The Binners’ Project had already applied for and paid for a $106 permit from the park board. Major film productions pay between $800 and $1,198, as well as other fees depending on the production, to film in a neighbourhood park. Some of those fees are paid per day of filming.

But in August, Binners’ Project staff were told they wouldn’t be able to use Victory Square because a film company called Great Lake Films planned to use the park as a filming location. Instead, the event will go ahead at Oppenheimer Park seven blocks away.

“We were pretty shocked, given the short notice,” said Sean Miles, the director of the Binners’ Project. “It wasn’t something we thought we would have to plan for — a last minute cancellation of our permit.”

The park board says the Binners’ Project had received conditional approval for their event, but the event permit had not yet been issued.

“When these extraordinary situations arise, our first option is to find a solution that will enable both activities to take place concurrently on their day and location of choice,” park board staff wrote in an email to The Tyee.

“When this is not possible, staff seek alternative locations for the event which is most easily relocated.”

The Tyee reached out to Great Lake Films but did not receive a response.

Having to relocate to Oppenheimer Park will cost the Binners’ Project about $5,000 more because of the materials needed to hold the event on the grass instead of pavement, to re-do a postering effort that had already begun, and for extra staff time to relocate the event, said Brianne De Man, manager of communications and development for the non-profit.

She said Victory Square is the ideal location for the coffee cup event because it’s located on the boundary between the Downtown Eastside and the rest of downtown, so people from all walks of life are drawn to the event to learn more about the recycling issues and role binners play in diverting waste from landfills.

“We get lots of people from the street that are coming by, and lots of passersbys who see the signs,” De Man said. 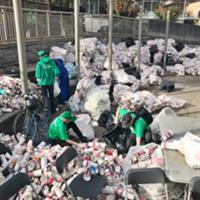 Victory Square Park is also where binners have gathered to organize politically over the years, and De Man said it will be a challenge to get the word out about the change in location to low-income binners, who often don’t have reliable access to phones or email.

The situation also raises questions about the equitable use of parks in the Downtown Eastside, Miles said, and how the needs of film companies are balanced with community needs in the vulnerable community. With its “gritty” urban look, the area has been a favourite film location for decades.

Earlier this year, neighbourhood advocates raised concerns about two Downtown Eastside parks which had been fully or partially closed to residents for months during the COVID-19 pandemic. Pigeon Park was partially closed to residents so a developer could store construction equipment on the site, and Oppenheimer Park remained completely closed after the removal of a tent city in May 2020. Both parks are now fully open to the public.

“It is a broader discussion about equity in the Downtown Eastside when it comes to the way the city and parks operate alongside these film companies,” Miles said. “And how the community can be involved in that conversation.”