For the B.C. teachers’ union and many parents, it’s not a moment too soon.

A week before school started earlier this month, Dr. Bonnie Henry announced that regional health authorities would stop sending home notifications about COVID-19 exposures when one or more cases are detected in a school, but the health authority doesn’t think there was in-school transmission.

Henry cited the anxiety and confusion such notices caused parents in the previous school year as the reason to stop these notifications, adding that notifications for clusters and outbreaks would continue to be provided.

But on Tuesday she reversed that decision, citing feedback from parents and teachers who wanted exposure notifications to return.

“We’ve asked our team to get together right now to make sure that we can notify schools in a timely, less intrusive and more sustainable way, and that parents will have access to that information rapidly,” she said, adding the government never stopped contract tracing and notifying parents whose child came in contact with someone with COVID-19, but the process has been slow. In August the province announced a plan to hire an additional 500 contract tracers to help meet demand.

Teri Mooring, president of the BC Teachers’ Federation, welcomes the return of exposure notifications, saying parents and teachers need more information from the government, not less, when it comes to COVID-19 in schools.

“There’s no reliable place to get information,” she said, adding that families are then turning to non-government sources, like the grassroots BC School COVID Tracker Facebook page run by two parents who crowdsource a school COVID-19 case database.

“There seems to me a responsibility on the government to publicly report on what’s happening in our public schools. Especially in terms of safety,” Mooring said.

She also wants to see the health authority share information with parents on why a case is classified as an exposure, rather than a cluster or an outbreak. Sometimes multiple cases of COVID-19 in one classroom are listed as an exposure instead of a cluster if the health authority doesn’t think they are related cases, but that is confusing for parents.

The health authority defines clusters as multiple people in a school contracting COVID-19 where transmission is suspected or confirmed to have occurred in the school, whereas an outbreak is uncontrolled, in-school COVID-19 spread.

But if there are doubts that multiple cases of COVID-19 in one class are connected to each other, for example, they are classified as an exposure instead of a cluster.

On Wednesday, the Chilliwack School District confirmed an outbreak in one of its elementary schools. The school has temporarily reverted to online learning on recommendation from the health authority.

“An outbreak is determined by the health authorities. If they think there is a need to close a school because of multiple cases of COVID-19, then they will declare an outbreak. But there’s no other definition of outbreak,” Mooring said.

She also wants to see classroom teachers included in the list of close contacts when contract tracing is done for a student who came to school while infectious, adding that teachers are not always contacted when a child in their classroom has come to school while sick.

Currently, when a parent tells school administration that their child has tested positive for COVID-19, protocols dictate that the principal inform their district boss and the Ministry of Education, but no one else.

Even if the student was in school during their infectious period, it is up to the regional health authority to decide who in the school community will be notified.

One Langley parent who spoke to The Tyee said that after their daughter tested positive last week, they learned from the parent of a classmate that their child had also tested positive just days before. Both children were in school during their infectious period.

“We’re all just sort of sitting here in the dark and wondering when and if the class is going to get notified at some point,” said the parent, who asked for their name to be withheld for family privacy reasons.

The Fraser Health Authority confirmed that contract tracing is happening regarding its cases, they said, but it is delayed.

The Tyee reached out to Fraser Health for an interview on the current school notification model, but it directed us to the Health Ministry. The ministry directed us to an online protocol document.

The exposures at the Langley school have been included on the parent-run BC School COVID Tracker on social media. But almost a week has passed, and while some close contacts have been notified by Fraser Health to self-isolate, the broader school community has not been made aware of the exposures.

In the meantime, the parent said the school principal told them via email not to discuss their child’s COVID-19 diagnosis with other parents in the school. While the principal is required to stay silent, there is no direction in provincial health protocols that requires parents to do the same.

“That crossed the line for me,” the parent said. “Something shady might be going on in terms of the protocols that schools are being asked to follow. That’s the part that none of us know at this point.”

In an email to The Tyee, a Health Ministry spokesperson confirmed there was "nothing in the health and safety protocols for schools" requiring a principal to ask parents not to tell other people about their child's COVID-19 diagnosis.

In the absence of timely and detailed information from the province, parents continue to seek out information on their own. The BC School COVID Tracker Facebook page, for example, has seen a boost in reports of COVID-19 cases.

“Even in the first week of school, probably we were at a level that we didn’t see until November 2020,” said Kathy Marliss, who runs the tracker. “We went from zero to full-speed ahead in a day or two.”

Most of the tips and reports Marliss is receiving are from people she’s never heard from before, she said.

Marliss has also heard from parents who were told by their principals not to talk about their child’s COVID-19 diagnosis and from school secretaries who say administrators are under pressure from the health authority to stay silent.

“I feel like the principals’, the school administrators’ hands are really in a bind and they’re put in a really horrible and challenging position,” Marliss said.

Earlier today, the Safe Schools Coalition, a group of parents, educators and administrators who held a rally in August calling for increased COVID-19 safety measures in schools, announced via a press release that it’s submitting freedom of information requests for COVID-19 data from all 60 school districts.

“While we recognize Dr. Henry and the B.C. government will be increasing school notifications, we are also aware that COVID-19 data in B.C. is not transparent and we are unwilling to wait for the government to act to rectify this,” the release says. 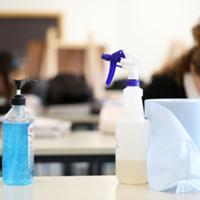 While Henry has said she’s confident that schools are safe because they proved to be last year, teachers’ union president Mooring said you can’t compare the two years. While schools are not totally back to normal, learning cohorts, two-metre physical distancing, students eating at their desks and bans on assemblies are no longer officially required.

Nor was the Delta variant dominant in 2020.

Mooring and the B.C. Safe Schools Coalition want the mask mandate to expand to include students from kindergarten to Grade 12.

The province has not given a justification for why the mask mandate starts at Grade 4, Mooring said, when in Ontario and some regions of Quebec the mandate includes students from Grades 1 to 12.

“We’re trying to mitigate, trying to prevent as many of those students from getting COVID-19 as we can,” she said, noting that students under 12 are still ineligible for the vaccine.

But the government and the provincial health office are not doing all they can, Mooring said.