On July 1, the Heiltsuk Nation reclaimed 63 acres of their historical land by purchasing the Shearwater Resort & Marina and acquiring the dozen businesses that operate there. Located on Denny Island near Bella Bella, B.C., the resort lies on a rocky shoreline lined with evergreen trees. The view from the resort stretches across neighbouring islands and all the way to the mainland.

Formerly a Royal Canadian Air Force base, the property was bought by the Widsten family in 1947 and has operated as a tourist destination and fishing resort ever since.

The $12.7-million purchase of the resort and marina by the Heiltsuk represents the largest economic investment in their modern history.

“We started working on this deal a few months ago,” says Marilyn Slett, an elected Chief of the Heiltsuk Nation. “But it’s actually been something that goes far beyond a few months.”

Slett formed part of the group, which included Heiltsuk leadership and members of the Widsten family, who attended the July 1 ceremony celebrating the formal transfer of the Shearwater Resort. The ceremony was held on the newly proclaimed Heiltsuk Day, which replaced Canada Day as the July 1 holiday of the Heiltsuk Nation this year.

The new holiday was the result of a resolution by both the elected and hereditary leadership of the Heiltsuk Nation, Slett says, and is a permanent change.

Relations between non-Indigenous business operators and First Nations on their traditional territories have often been fraught with tension. By contrast, the Heiltsuk Nation and the Widsten family have maintained an amicable relationship over the years, says Slett, who called the development an example of reconciliation in action.

“It has been a good relationship, not without its challenges, with a company being grown and developed within the territory,” says Slett. “But I think that a lot of personal relationships between families in the community have developed.”

The remaining funds from these reconciliation agreements, Slett says, will go towards training and marketing for the Heiltsuk’s various economic sectors and possibly more land purchases, all of which will strengthen the Heiltsuk economy.

Furthermore, Slett says that any steps towards reconciliation and economic growth must be dictated by the Heiltsuk only.

“Closing any socioeconomic gaps and reconciliation has to be done through a process that’s defined and outlined by our nation, which we call ‘Haíłcístut’: ‘turn things around and make it right again,’” says Slett.

Like many Indigenous communities across Canada, the Heiltsuk have been struggling with news about unmarked graves at former residential schools over the past several weeks.

But the purchase of the Shearwater Resort and return of the land was cause to celebrate. The purchase returned only 63 acres of land to the Heiltsuk, whose traditional territory encompasses over 8,785,000 acres in total.

Younger members of the community were some of the most excited about the news, Slett says. “A lot of our young people really saw it as land back.”

“Even though it’s a small tract of land coming back, knowing how to control that was something that really resonated with younger people in the community.”

Younger Heiltsuk people are also among the most enthusiastic about expanding future tourism on Heiltsuk land, Slett adds. Prior to the pandemic, tourism in B.C. generated over $22 billion annually. In contrast, Indigenous operators across the country generated less than $2 billion annually.

The Heiltsuk have plans to add ecotourism opportunities for guests at the Shearwater Resort in addition to existing sport fishing and wildlife tours.

“Our community has always been quite cautious around tourism,” says Slett. “We have a lot of younger people right now that are taking tourism programs and looking at business models [for the Heiltsuk] to become a tourism operator within the territory.”

It’s important, Slett adds, to move towards a vision of Indigenous tourism that is not extractive and that supports Heiltsuk community and values. Slett says the community sees tourism as one part of a broader economic vision. 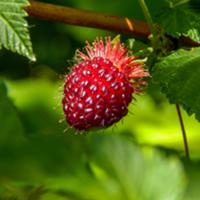 Thriving Together: Salmon, Berries and People

“We always want to be able to diversify our economy and grow our community to be able to provide employment, to close socioeconomic gaps and just have those opportunities for our people,” she says.

The collective Indigenous economy within Canada is currently valued at $32 billion, roughly the same as the GDP of Newfoundland and Labrador.

Organizations like the Indigenomics Institute hope to help grow this figure to $100 billion within five years, by growing Indigenous economies through partnerships with the federal government and corporate entities and integrating Indigenous businesses into their supply chains.

Slett sees land reclamation as essential to the economic growth and equity of First Nations like the Heiltsuk.