[Editor’s note: There is nothing surprising or shocking in the discovery of the remains of 215 children on the grounds of the former Kamloops Indian Residential School, as the 2015 Truth and Reconciliation report demonstrated. The Canadian government removed Indigenous children from their families and placed them in dangerous, deadly institutions across the country for more than 100 years, only closing the last school in 1996. The commission reported that children were buried in unmarked graves in lost cemeteries, for various reasons. Below, an excerpt from the commission’s report. ]

This content is disturbing. A national Indian Residential School Crisis Line provides 24-hour support for former students and those affected, including referrals to emotional and crisis services. Call 1-866-925-4419.

Several of the schools were overwhelmed by the influenza pandemic of 1918–19. All but two of the children and all of the staff were stricken with influenza at the Fort St. James, British Columbia school and surrounding community in 1918. Seventy-eight people, including students, died. Initially, Father Joseph Allard, the school principal, conducted funeral services at the mission cemetery.

But, as he wrote in his diary, the “others were brought in two or three at a time, but I could not go to the graveyard with all of them. In fact, several bodies were piled up in an empty cabin because there was no grave ready. A large common grave was dug for them.”

That same year, influenza killed five Red Deer, Alberta school students. Four died at the school, and a fifth died while running away. That boy’s body was returned to his home community, the Saddle Lake Reserve. According to Principal J. F. Woodsworth, all the students and many of the staff came down with influenza.

“Everyone was so sick that it was impossible for us to bury the dead. There was no one here to dig graves in our own school cemetry [sic]. I thought the best thing to do was to have the undertaker from Red Deer take charge of and bury the bodies. This was done, and they now lie buried in Red Deer. The charges for this extra accommodation amount to about $30.00 a child; that is for the four who died here. In view of the emergency and the totally unexpected nature of the case I shall be glad if the Department will bear part of this expense. I believe the total under-taker bill is $130.00. I instructed the undertaker to be as careful as possible in his charges, so he gave them a burial as near as possible to that of a pauper. They are buried two in a grave.”

Because the burial costs in the Red Deer municipal cemetery were judged to be “unavoidable,” Indian Affairs Deputy Minister Duncan Campbell Scott agreed to reimburse the school for the costs.

Although Scott made no reference to an existing policy, the letter demonstrates that under normal circumstances, the schools were expected to cover the burial costs of students who died at school. The most cost-effective way of doing that would be burial in a cemetery on school grounds. Indian Affairs would pay for a child’s burial only under unusual circumstances, and, if it did pay, it expected the costs to be kept as low as possible. In this, the department conformed to the general practice of the period in the treatment of those who died in institutions. It was not uncommon for hospitals to have cemeteries in which indigent patients were buried, and workhouses for the poor also had cemeteries.

According to Chapleau, Ontario student Michael Cachagee, the students had to help dig the graves. It is a memory that has haunted him all his life. In a 2010 media account, he said that because the graves dug in the winter were shallow, in the spring, bears would root about in the cemetery and feed on the student remains.

Indian Affairs was clearly reluctant to send the bodies of children who died at school home for burial. In her memoirs, Eleanor Brass recalled how the body of a boy who hung himself at the File Hills, Saskatchewan, school in the early 20th century was buried on the Peepeekisis Reserve, even though his parents lived on the Carlyle Reserve.

Although McLean’s memorandum stated that the bodies of students who died at the schools were to be sent home “when the parents have refused to permit burial at the school,” this practice was not always followed. In 1913, two girls, Anna Lahache from Kahnawake and Jennie Robertson from Garden River, drowned while on a picnic expedition at the Spanish, Ontario school.

School officials buried Jennie at the school after being unable to reach her mother within four days. Anna’s body was not recovered until a week after the drowning. Anna’s mother requested that her body be returned home for burial, but it was decided that it was too badly decomposed and the cost too high.

In 1938, Catherine Lacore requested that the body of her son, who was dying of tubercular meningitis at the Spanish school, be sent to her in Cornwall, Ontario for burial upon his death. The response from Indian Affairs to the school was:

“I have to point out... that it is not the practice of the Department to send bodies of Indians by rail excepting under very exceptional circumstances. Bodies so shipped have to be properly prepared by the undertakers for transshipment under the laws of the province, and the expense of a long journey such as this would be, would entail an expenditure which the Department does not feel warranted in authorizing.”

The boy’s body was buried at Spanish.

Not all requests were rejected. Clara Tizya, who grew up in Rampart House near Old Crow in the northwestern Yukon, recalled that:

In the 1940s, Indian Affairs was prepared to cover the burial costs of residential school students who died in hospital. It was not, however, prepared to pay for the transportation of the body to the student’s home community.

The Social Welfare section of the 1958 Indian Affairs field manual provided direction on the burial of “destitute Indians.” Burial costs were to be covered by Indian Affairs only when they could not “be met from the estate of the deceased.” There was no fixed rate of payment. Instead, the “amount payable by the local municipality for the burial of destitute non-Indians is the maximum generally allowed.” Those who died away from their home reserve were to be buried where they died. “Ordinarily the body will be returned to the reserve for burial only when transportation, embalming costs and all other expenses are borne by next of kin. Transportation may be authorized, however, in cases where the cost of burial on the reserve is sufficiently low to make transportation economically advantageous.”

An example from that year reflects the implications of this policy for families in remote communities, particularly in the Canadian North. In April 1958, John Lucas, a student from the Carcross school in the Yukon Territory, died during surgery at the Charles Camsell Hospital in Edmonton, Alberta. Indian Affairs officials estimated that it would have cost $217.20 to ship the boy’s body back to the Yukon. Instead, he was buried in Edmonton at a cost of $110.

The issue was brought to the attention of Yukon member of Parliament Erik Nielsen, who questioned the decision to bury the boy in Edmonton. He argued that it would have been cheaper to ship the body home.

Nielsen disputed the claim that the boy’s father had approved the Edmonton burial.

“Mr. Lucas was not advised as to the funeral in Edmonton, and as a matter of fact had no word about the funeral at all. The Indian people of Mayo are very bitter about this matter and, while Mr. Lucas may not have complained directly to your Department or to the Indian Agent here, he, nevertheless, I can assure you, has complained quite bitterly. I am sure you will appreciate that the Indian people have a slightly different approach to matters such as these than we do, and unless their dear ones are interred in the community in which his close relations abide, and unless they are interred in the Indian fashion and with proper Indian ceremony, the deceased, as far as the Indian people are concerned, is a lost soul. This is quite disturbing to them.”

Indian Affairs officials later acknowledged that the estimated cost of shipping the body to the boy’s community had been based on the erroneous belief that the body needed to be sent in a sealed casket. Such a casket was necessary only in the case of death by contagious disease. In reality, the shipping costs would have been $125, making them comparable with the cost of burial in Edmonton.

The reluctance to pay the cost of sending bodies home continued into the 1960s. Initially, Indian Affairs was unwilling to pay to ship the body of 12-year-old Charlie Wenjack back to his parents’ home community in Ogoki, Ontario. The boy had died from exposure in October 1966 after running away from the Presbyterian school in Kenora. Eventually, the government agreed to pay the transportation costs, which involved both rail and air fees. 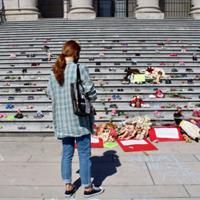 ‘It Shook Me to the Core’

Eight years later, when Charles Hunter drowned while attending the Fort Albany, Ontario school, it was decided, without consultation with his parents, to bury him in Moosonee rather than send his body home to Peawanuck near Hudson Bay. Almost 40 years later, in 2011, after significant public efforts made by Joyce, the younger sister who had never got to meet this big brother, Charles Hunter’s body was exhumed and returned to Peawanuck for a community burial. The costs were covered by a fund that the Toronto Star raised from its readership....

Many, if not most, of the several thousand children who died in residential schools are likely to be buried in unmarked and untended graves. Subjected to institutionalized child neglect in life, they have been dishonoured in death. Many Aboriginal people have unanswered questions about what happened to their children or relatives while they were attending residential school.

The work that the commission has commenced in identifying and commemorating those students who died at school and their gravesites needs to be completed.