It can be hard to talk about anti-Asian racism. In fact, it can be just as hard for some to admit that it exists — even those who are targets of hate.

At the start of the pandemic, Doris C. decided to talk to her mother about it. Doris had experienced racism herself on a walk with a friend, when the driver of a passing car shouted anti-Asian slurs at them.

After Doris shared this, her mother revealed she’d had a similar experience during a trip to London Drugs. A fellow shopper had spewed racist language at her. Doris was surprised to learn that the incident happened weeks prior, and that her mother didn’t say anything about it then. “She didn’t even see it as racism,” said Doris.

Hate crimes are likely to be the most underreported offences in B.C., according to the government.

So in May 2020, Doris and her friend launched their own online reporting system for Canada, inspired by similar efforts in the U.S. They called their initiative Project 1907, named after the year of Vancouver’s anti-Asian riots.

At the top of the reporting form is the question: “Please tell us what happened.”

“We really wanted to make this our first question. It’s what you want to tell us, as much or as little as you want,” said Doris. “People might not feel comfortable if they have to give a lot of their details… especially if they don’t feel comfortable or safe with the police.”

Their hope was that the multilingual form would encourage people like Doris’s mother to put the discrimination they’ve experienced into words.

In Vancouver, anti-Asian hate crime incidents have spiked eightfold, from 12 in 2019 to 98 in 2020. Police departments in neighbouring cities have also seen an increase. Burnaby, for example, saw a jump from six incidents in 2019 to 27 in 2020.

The “China virus” blame for COVID-19 has emboldened racists around the world, with people in Vancouver being told “you don’t belong here” and “you’re what’s wrong with society.”

We don’t have a formal accounting of all acts. Police only release tallies of official hate crimes, and many acts don’t meet the criteria of a hate crime.

Even for things that might constitute assault, such as targeted spitting or coughing, victims might choose to brush it off rather than call the police, perceiving the offence as too minor.

That’s why Doris says the reporting system was needed. “We’re not data collectors. We’re not statisticians. But we did feel this need to demonstrate and prove that it’s happening. We know that police’s job is to fight crime. But for hate crimes, the hate part comes after the fact.”

Project 1907 has partnered with the Vancouver Asian Film Festival’s Elimin8hate campaign on the anti-Asian racism reporting system, which is also supported by the Chinese Canadian National Council for Social Justice.

To date, they have received over 1,500 reports of racist incidents nationwide.

Verbal harassment like name-calling, racial slurs, threats and swearing were the most common type of racial discrimination experienced, totalling two-thirds of reported incidents.

Almost 30 per cent of incidents represented some form of assault, including targeted coughing, spitting and physical violence.

Most of the incidents happened in public spaces, like on the street and in parks. But the second-most common location was grocery stores. In March 2020, early in the pandemic, a pregnant woman shopping at a downtown Vancouver grocery store was told to “go back to China.”

The Vancouver police department told The Tyee that it wants the public to report all incidents of hate, even if they may not meet the definition of a crime. The province recommends that too, because “no matter how minor,” the reports help police and community groups improve prevention, education and outreach.

But racialized people who’ve had bad experiences with public institutions can doubt their usefulness. Doris has noticed that in her work programming seniors’ activities in Chinatown. In 2019, a local senior was pushed down by an attacker, who then stomped on and broke their arm. It was reported to the police, but the incident was not caught on camera and did not result in any consequences.

There are times when Doris has asked seniors to report an incident to the police, only for the seniors to respond, “What are they going to do?”

Among racialized groups in a place like Canada, there are many reasons why someone chooses not to report an incident to the police, says John Paul Catungal, an assistant professor of critical race and ethnic studies at the University of British Columbia.

They may not have the time if they’re worrying about making a living. Or they may not have the know-how, such as navigating literacy around crime and facing language barriers when engaging with the system. “Someone who’s unsure of what constitutes as a hate crime can itself be a barrier,” said Catungal.

Victims may worry about personal consequences, such as whether the act of reporting will impact their work or immigration status. They may worry about feeling dismissed if their incident doesn’t meet the threshold for legal consequences. Or they may simply not want to relieve the experience.

“Sometimes, letting go is the least traumatizing thing to do, rather than relive it, be questioned about your experience, and maybe not be believed. It’s a coping mechanism and an important one,” said Catungal.

Barbara Lee launched Elimin8hate during the pandemic rise of anti-Asian racism. She lists some common responses from people who don’t know how to process the hate they’ve experienced: denying that it happened, dismissing it as minor or blaming themselves for getting into harm’s way.

“What we describe is death by 1,000 cuts,” said Lee. “Over time, it weighs on mental health, it leads to silencing and marginalization.”

Those responses are something Doris has noticed as well.

In recent decades, academics have studied “respectability politics,” when racialized people fulfill the expectations demanded of them by mainstream society in order to assimilate. In simpler terms, it means working hard and keeping one’s head down, even ignoring experiences of racism.

Doris’s mother, for example, dismissed the targeted slurs at London Drugs, saying they were part of the “experience” of being Asian Canadian. And Doris once attended a meeting in Chinatown where one stakeholder, who was of Asian descent, was too nervous to say the words “anti-Asian.”

She’s also seen Asian Canadians critique the racism that they go through, saying it’s “not as severe as other racialized peoples.’”

“It becomes so engrained… putting our heads down to not make a fuss,” said Doris. “We might not recognize [our own experiences] or name it as racism.”

The Criminal Code of Canada does not define what constitutes a “hate crime.” In fact, these words are nowhere to be found in the code. It does contain offences like “hate propaganda” and mischief like property damage that could be “hate-based.” These are arguably more obvious displays of hate and easier to prosecute.

The Department of Justice itself has admitted that defining hate crimes is a “central problem.” Police across Canada use differing definitions, some using the term “hate crime” and others “bias crime.” These are crimes where the motive is based on factors such as the victim’s race, religion, nationality, ethnic origin, gender, disability or sexual orientation.

The Vancouver Police Department does use the term hate crime. Like the province, the VPD considers these acts to be underreported.

Those who report a hate crime may be referred to the VPD’s victim services unit, which isn’t made up of police officers, to offer assistance and support with trauma. 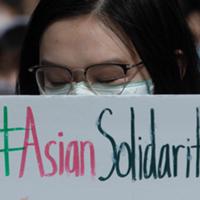 How to Survive Anti-Asian Racism? Community Is Key

“Sometimes there isn’t enough evidence to proceed with criminal charges, but not all victims want that, not all victims expect that,” says VPD spokesperson Sgt. Addison. “Some people want to be heard. They simply want their incident to be documented. That’s important too.

Even for something as explicit as hateful graffiti, a building manager may just decide to paint it over and move on, he said.

Advocates like Doris and Lee hope that campaigns like theirs help people deal with racism they’ve experienced, whether that’s acknowledging it, confronting it or healing from it.

“It’s really important,” said Lee, “to build that muscle memory to speak up.”