One week ago, Velma Olsen put up a Facebook post asking fellow beaders to send her baby moccasin tops for a memorial to honour the 215 children who didn’t return home from the Kamloops Indian Residential School.

The recent finding of the children “really, really hit close to home,” says Olsen, whose father is a residential school survivor.

“I have been struggling to comprehend the news of the children found,” she wrote in her post. “I wanted to do something to mark the significance of the loss. I’m hoping you will all join me in beading a baby moccasin top and send it to me so that I can create a display.”

Olsen, who is from the First Nation of Na-Cho Nyak Dun in Mayo, Yukon, was expecting responses from people from her community in the Yukon, but the small project quickly snowballed, drawing attention from beaders across Canada, even from people in Germany.

In the past few days, she says she’s received more than 3,500 notifications from Facebook messages and comments, and emails. Only one was “a little bit questionable,” she added.

Olsen has already received her first moccasin top in the mail. She hopes to feature the eventual display in cultural centres across the Yukon, and after it has toured the territory, find it a permanent home. 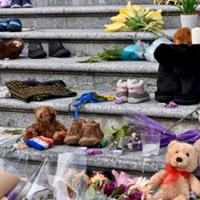 In Their Shoes: Community Creates a Symbol of Mourning for Those Killed in Residential Schools

“My intentions weren’t going to be so grand,” Olsen says. “I am very, very humbled.... I hope to do everyone justice.”

Olsen anticipates receiving more than 1,000 moccasin tops. Teachers have begun incorporating the project into their classes while explaining the history, impact and heartache of residential schools.

A baby moccasin top is small, measuring about two inches by three inches. Olsen estimates that creating a pair takes about a week for beginners, and is much faster for long-time beaders.

Her plan is to mount the moccasin tops on a room divider frame, allowing people a 360-degree view.

She’s hoping to receive submissions for the project by July 1 but knows that some, like those arriving from Germany, might take a bit longer in the mail.

To participate in Olsen’s project, and acknowledge and honour those who did not come home from Kamloops Indian Residential School, you can find out more information at: For the Children Lost.