Small changes to the way Canada’s immigration tribunals make decisions during the pandemic could mean a world of difference for migrants in detention centres and prisons, a recent study finds.

The study’s authors, Dr. Efrat Arbel and Molly Joeck from the University of British Columbia’s Allard School of Law, analyzed 17 decisions made by the Immigration Division — the tribunal in charge of deciding whether or not migrants should be held in detention — between March and May 2020.

They found that for the first time, the tribunal considered the conditions of detention, namely, the threat of COVID-19 in crowded facilities, when deciding whether a migrant should be released.

What may sound like a minor technicality could be a significant step towards reforming Canada’s immigration detention system, the authors say. Now immigrants seeking release may be able to present as evidence a range of hardships they are enduring while incarcerated and do so in a hearing process less cumbersome and hostile than before, say the authors.

Already the result has been freedom for many. After hearing the experiences of migrants being held by the Canada Border Services Agency and considering the impacts of detention on their health, the Immigration Division had released 206 people by April 2020, leaving 127 people in detention, less than half the number of pre-pandemic detainees.

Advocates have long raised the alarm about the harsh conditions that migrants face in detention, and the well-documented impacts of these conditions on migrants’ well-being.

One study found that after only 18 days in detention, 78 per cent of detained asylum seekers suffered from clinical depression and 32 per cent suffered from PTSD. Detainees are sometimes held in solitary confinement, which is recognized as a form of torture by a number of international treaties.

Detained migrants are also often held among people convicted of crimes in maximum-security jails, despite facing no criminal charges.

In prisons, migrants often have limited access to translators, lawyers, internet and phones and have the same limitations on their mobility as criminal detainees. Since 2000, at least 16 migrants have died in these conditions.

But the Immigration Division has never considered these experiences in weighing releases, because it does not have the independence of a regular court.

Canada is one of the only western countries with no maximum time limit on how long an immigrant can be incarcerated, meaning detainees often go through years of Immigration Division hearings with no idea of when they might be released.

“I’ve watched detainees build up a lot of anger and frustration feeling like there’s nothing they can do to have their liberty rights recognized,” said Joeck, a practising immigration lawyer, in an interview with The Tyee.

The only way a migrant has been able to appeal the conditions of detention, other than a costly judicial review at a federal court, is to file a complaint with the Canada Border Services Agency — “the very agency that has ordered their detention and set its terms,” write Arbel and Joeck in the study. They call the CBSA “an adverse party to the proceedings” and “not sufficiently independent” to make such rulings.

But now detained migrants can make legal arguments based on their experiences in detention to the tribunal, a shift that “empowers detainees, allowing them to more effectively advocate for their release,” the authors write.

The changes create an avenue for migrants that is independent of the CBSA, but the authors say more needs to be done. The CBSA is still the only public safety agency in Canada with no independent oversight.

The federal government introduced a bill that would create a body of oversight for the CBSA, but it has stalled due to the pandemic. Experts and advocates argue that the proposed body in the bill is not sufficiently independent and falls short in terms of its jurisdiction. In Arbel’s words, “it lacks teeth.”

Arbel and Joeck join other advocates in opposing Canada’s closing of its border to refugee claimants during the pandemic. The closure violates legal obligations to protect asylum-seekers under the Refugee Convention, they said.

The Washington Post has found that the CBSA has directed asylum-seekers who have arrived at the southern border back to American officials, where a number were detained and deported by Immigration and Customs Enforcement.

“People are operating in the shadows,” Maureen Silcoff, president of the Canadian Association of Refugee Lawyers, told The Tyee. “That’s the worst of it, I think, because we don’t even know how many people are detained and we don’t know if people have been sent back home by the U.S.” 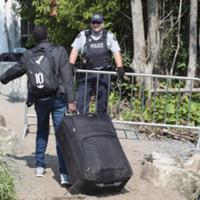 Canada Has a Dismal Record of Locking Up Migrants

“So that’s what makes Canada’s policy even more problematic because, from the situations we know about, they’re of grave concern, and what about the people that haven’t come to light?”

Her organization recently announced it is filing a legal challenge against the federal government for the border closure, on the basis that the Supreme Court ruled that refugees have the right to a hearing in Canada, which would not be fulfilled if they are turned back to the U.S.

The challenge also claims that the government did not consider the impact closing the border would have on refugee claimants. Canada needs “a more systemic solution to what is a real human rights violation,” said Silicoff.

Arbel and Joeck say their study is just a preliminary first step in a bigger project. They are gathering a much larger dataset and hope to gain a more comprehensive overview of the way decisions about refugee detention have been made throughout the entirety of the pandemic.