At Crab Park, an urban oasis in the heart of the Downtown Eastside, people are drawn to sit on the beach and gaze across Burrard Inlet to the North Shore mountains.

But four years after the Port of Vancouver, overseen by the Vancouver Fraser Port Authority, proposed an expansion of the Centerm container terminal, a wall of shipping containers will soon block a chunk of that view.

“It feels much more enclosed,” Don Larson told The Tyee during a visit to the park on April 26. “It feels like they’ve already cut off the ocean.”

Then there’s the noise: a distant but constant cacophony of rumblings and beeps that drifts across the water. The Centerm Expansion Project is increasing capacity at the container terminal to meet demand for international containers and imported goods being shipped through Vancouver.

It’s the largest infrastructure project the port authority has ever led and is expected to be completed by early 2022.

The federal land on which Centerm sits is expanding by about 15 per cent. Infill is being added at either side of the terminal, primarily as space to hold containers after they’ve been taken off ships and before they are loaded onto rail cars for shipment to the rest of Canada (and vice versa).

Larson says he’s expecting the infill portion of the project to soon be filled with a wall of shipping containers.

As he has been for decades, he’s keen on drawing attention to the Downtown Eastside’s only public waterfront park.

The green space, owned by the port but managed by the Vancouver Board of Parks and Recreation, has uneasily co-existed with Vancouver’s industrial waterfront since Larson and other community members lobbied, protested and occupied land in the 1980s to “Create a Real Available Beach.”

Access to parks has become more important than ever during the COVID-19 pandemic, as city residents flock to them as one of the few safe options for recreation and relaxation.

But people who live in Vancouver’s poorest neighbourhood have seen their options shrink.

Oppenheimer Park has been completely fenced off since May 2020 following the removal of a tent city, and Pigeon Park has only recently been made accessible again after being used to store construction equipment for two years. (Oppenheimer is scheduled to partially reopen this June).

Crab Park, located at 101 E. Waterfront Rd., has stayed open to the public throughout the pandemic and continues to provide respite for Downtown Eastside residents. But supporters and visitors have watched in dismay over the past few months as the Centerm expansion encroaches on the views and peaceful atmosphere.

The Port of Vancouver says it has provided $1 million to fund community initiatives and improvements to Crab Park as part of the Centerm project. The Vancouver parks board “will be consulting community stakeholders to help determine the best use of these funds.”

Larson and other Crab Park supporters didn’t want the Centerm expansion to go ahead, but now that it has, Larson is trying — not for the first time — to get the port to give up a mostly unused four-acre parking lot that borders the west side of the park

If that land is added to Crab Park, Larson argues another beach area can be created — one that provides an unobstructed view over the inlet.

The port says the parking lot is used during the cruise ship season for “cruise operations logistics,” although with Canada extending its cruise ship ban until February 2022 because of the pandemic, the parking lot “has been repurposed and is under lease with a port tenant.”

The day The Tyee visited the park with Larson, the lot was mostly empty.

Then there’s a long-awaited Indigenous healing centre that was first proposed for Crab Park more than a decade ago. The Vancouver parks board passed a motion in June 2019 to ask the Port of Vancouver to collaborate with Indigenous groups to explore the idea. 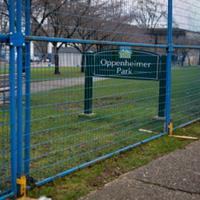 Chris Livingstone, who was working with the Western Aboriginal Harm Reduction Society at the time, says there were two calls from park advocates: expand the park and create an Indigenous healing or cultural centre at the park.

“The whole process seems to be stalled — there’s been no action on it,” Livingstone said.

John Irwin, a park board commissioner, says there hasn’t been much movement on the issue since the motion was approved. “I think in some ways it got tied to the expansion to the west of the park,” Irwin said. “I fully agree it would be great to expand the leased area over that parking lot, but I also feel like we could get tied up in a long, multi-year discussion with the Port of Vancouver.”

Irwin says he’s urging advocates to focus on the Indigenous healing centre rather than trying to get more land added to the park, because that could be a very long fight.

He suggests the healing centre could be located where the field housing and bathrooms currently are. That structure was closed to the public after it fell into disrepair.

Irwin says he’s open to writing another motion to bring to the parks board to get the healing centre on the board’s next capital plan, which will cover 2022 to 2026.

Passing by the fenced-off field house, Larson says it’s sad to see the key piece of park infrastructure in such poor condition. The replacement bathrooms — porta-potties that are not fully enclosed — are often dirty and don’t provide enough privacy to be safe, Larson says.

In addition to the healing centre, with the Centerm expansion extending even farther across the inlet, Larson also wants to see a small existing wetland area in the park be expanded to provide more habitat for birds.

“You know, there are 26 species of waterfowl in Burrard Inlet, a number of them coming in here. That’s natural sound,” he said, contrasting the ambience of nature with the industrial rumblings of the Centerm terminal. “We’re losing that at this very moment. We are losing it as we speak.”