Across Vancouver, people are flocking to parks to take selfies with cherry blossoms — a sure sign that spring is here and a boost to spirits in anxious times.

In Oppenheimer Park in the Downtown Eastside, the pale pink blossoms are in full flower. But residents can only look at them through a high blue fence. That’s because the block-long park has been completely closed for 11 months, ever since the removal of a tent city in May.

The park board plans to partially reopen Oppenheimer Park in June, starting with the west side. Community groups say they’re eagerly anticipating that day and are already planning how they’ll be using the park for meal programs, dance lessons and trips to the playground.

Donnie Rosa, the general manager of the Vancouver park board, said she knows the blue fence has been frustrating for the community, but it’s taken a long time to renovate the damaged lawn.

Staff had to deal with a rodent infestation and had to replace not just the grass, but several layers of soil, because needles and other dangerous items had been pushed into the ground during the time the tent city was located there for two years.

In November, the field house in the park was vandalized, and extensive repair work is still needed to fix the damage.

The playground was not damaged and is in good shape but will remain behind the fence for the time being.

Community advocates had criticized the park board for not communicating their plans with residents, even though access to parks has become even more important during the COVID-19 pandemic and many residents in the Downtown Eastside live in tiny single-room occupancies with little access to outdoor space.

At the same time Oppenheimer Park was closed, another Downtown Eastside park — Pigeon Park at Hastings and Abbott streets — was partially closed because it was being used by a developer to store construction equipment.

Rosa said reopening Oppenheimer Park is a priority for the park board, and she pushed for Pigeon Park to be fully open to the public when the developer’s contract with the park board ended on March 31.

Rosa said she hopes that Oppenheimer will be fully open by July or August, and park staff plan to meet with a number of Downtown Eastside organizations and community groups to make sure the reopened park is serving the community.

“There’s a real anticipation to have the space back. People are missing their space,” Rosa said.

“They’re missing their community. They’re tired of looking at this fence. I’m sitting right there now looking at the beautiful cherry blossoms and looking at the bright colours of the playground, and it just feels so wrong to have spring coming upon us and the community not having access.”

A tent city that swelled to around 200 tents at its largest was located at Oppenheimer Park for two years. In May, the province and city removed the encampment and housed many of the residents in hastily-leased hotel and motel rooms, citing the risk of COVID-19 transmission as the reason to enact a public safety order to remove the camp.

But a new tent city set up at a lot near Crab Park. It then moved to Strathcona Park, while overall homelessness grew during the COVID-19 pandemic. The city and province are now working to move people who live in Strathcona Park into housing, including newly-purchased or leased hotels.

Rosa said the park board has new tools to ensure that a permanent tent city does not form at Oppenheimer Park again. A bylaw passed in June allows camping in parks between 7 p.m. and 7 a.m., but people must pack up and leave in the morning.

Rosa said the programming in the park, which the park board plans to develop alongside community groups like Carnegie Community Centre Association, the Downtown Eastside Women’s Centre and Aboriginal Front Door, will also help strike a balance between the needs of unhoused people and other park users.

Epp said meal programs and cultural activities will be an important part of the park when it reopens, and he hopes the park board will partner with Indigenous groups to participate in those activities.

“I hope that they get together and make it so it’s not a tent city, so there’s not so much violence in there,” Epp said. “Last time I went there, I brought my kids to play in the park, but there was so much violence.” 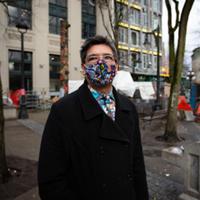 ‘Shame on the Park Board’: Downtown Eastside Residents Shut Out of Parks During Pandemic

Emiko Morita, the executive director of the Powell Street Festival, said the Japanese Canadian community has such a strong connection to the park that people have met there for special events even though the park was closed.

The park, located in the heart of Vancouver’s historic Japantown, features a baseball diamond and a plaque honouring the legendary Vancouver Asahi baseball team.

Morita and her colleagues already have plans for when Oppenheimer Park reopens: they want to hold dance classes at the park to teach special choreography for the next Powell Street Festival in August.

“It’s a combination of a traditional folk dance called tanko bushi, a ubiquitous morning exercise that people do called rajio taiso, and a little appearance of Godzilla,” Morita said. “We’re looking forward to having a series of lessons in the park so people can come and learn it.”