Canada is welcoming more international students from India than any other country, but advocates say more supports are needed to help with their mental health and prevent exploitation.

Kushandeep Singh experienced that gap in support when he arrived from India to study business management at Kwantlen Polytechnic University.

Singh’s father, a farmer in the small northern Indian village of Bibipur, mortgaged his land to help pay for his studies. To help with the bills, Singh found a construction job in Surrey.

It was physically demanding work, lifting lumber and installing glass. But his employer did not pay him for the hours he put in.

“If I worked for 20 hours, he’d give me a cheque for 10 hours,” said Singh. “I didn’t know anything about the rules and regulations. I worked there for almost nine months, and he paid me about six or seven dollars per hour.”

Then one day, a sheet of glass fell and cut his arm. Singh was rushed to the hospital.

“I was not provided with any safety gloves, safety shoes, a hard hat. If I had even one of those, maybe I would’ve been saved from that injury.”

Singh had a hard time filing for workers’ compensation because his employer denied that he used to work for him.

“It was the hardest time I’ve ever had in my life,” said Singh. “I had to go through it all alone. And I was fighting with my own body too.”

The claim was eventually approved, but to this day Singh’s arm has not perfectly healed.

There are many stories like this of international students facing hardship because of unfamiliarity with Canadian systems. They may also come across people who try to exploit that unfamiliarity, and the fact that they are away from the supports they would have back at home.

“Whenever you have any type of sickness, you miss family,” said Gurleen, who had to navigate the B.C. health system after being hit by a car. “I was on crutches and I had to cook food, and I didn’t have enough money to bring food home.”

While studying in Greater Vancouver, Gurleen said she also had to deal with an employer and a landlord who sexually harassed her, both of whom were relatives. (The Tyee agreed to Gurleen’s request not to share her last name because of the sensitive nature of her experiences.)

Gurleen is proud of where she ended up today, working as a truck dispatcher.

But she knows she’s one student among many who need better supports. “Canada gave me depression,” said Gurleen.

In 2019, the country welcomed 138,760 students from India. Indian students continued to outnumber students from any other country, even in the pandemic year of 2020 and in 2021 so far.

South Asian communities tend to access mental health and substance support services less than the general population, according to the province.

For international students, schools may not be equipped to provide them with this help.

“College counselling wasn’t very helpful, because it was in English, and I wasn’t able to convey my deep feelings,” said Ramandeep Kaur.

She has had some bad experiences with landlords, including one who threatened her unless she covered the rent of a former roommate.

Her situation took a better turn after meeting a counsellor who spoke Punjabi. In addition to helping with her mental health, he pointed her to supports with finances and immigration.

“It’s much easier to communicate emotions in your first language,” said Kaur.

Culturally specific mental health is desperately needed, said Kulpreet Singh, who founded the South Asian Mental Health Alliance in 2010 to help tackle stigma around the subject, especially among young people whose families may not be used to speaking about it.

“International students might be privately going through a lot of stress,” said Singh, but may be unsure about how to seek support.

Youth in his organization have also been tackling the related issue of substance use, especially with the public health emergency of overdose deaths.

Organizations like Singh’s have been speaking out about the effects of the gap in services.

One Voice Canada, for example, is an organization that focuses on international students’ rights and resources. It recently drew attention to students that died by suicide, citing the exploitative economy that targets students as one factor.

But the hope of Singh and others is that there will be more funding and systemic support to create a more formal service to support and prepare students as soon as they arrive in Canada.

International students are often afraid of doing anything that might affect their status in the country. An on-boarding service would educate them on when to speak up for their rights, he said.

It’s become even more important during the pandemic, with many students working frontline jobs.

“Maybe they don’t have the power to speak up to their superiors about getting [PPE], asking for more distancing between workers and getting paid sick leave to take time off,” said Singh.

He’s heard from students who’ve been exposed to COVID-19 at work. After testing negative for the virus, they’re supposed to self-isolate for 14 days after contact with the infected person. However, their employers wanted them to skip the isolation and return to work.

Data from B.C.’s third wave of COVID-19 revealed that communities with large South Asian populations were hardest hit. Inadequate outreach and a high proportion of frontline workers are cited as reasons for this.

It’s been a tough year even for those students who have supportive employers, like Rahat Thukral, a medical office assistant.

“I started at the peak of the pandemic and it was really, really hard,” she said. “I wasn’t prepared to deal with people yelling at me all the time.”

Patients often directed their stress at her, yelling about unrelated things such as not being able to go on holiday during the winter.

In addition to living with the pandemic in B.C., there’s also worry about loved ones back home in the midst of India’s severe second wave of COVID-19.

“It’s the darkest phase right now,” said Thukral, whose parents are both doctors back home. “I really want to help out because my friends and cousins there are all getting sick.”

Gurleen is on edge these days when she gets updates from home. 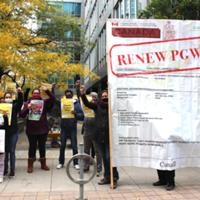 On the Path to Permanent Residency, Migrant Students Are Running Out of Road

“I’ve been working seven days a week the past few weeks, and every time the phone rings, it’s hard not to go into shock, asking if everything with my family is OK,” said Gurleen, who caught the virus herself last year.

For Kushandeep Singh, graduating in the middle of a pandemic was less eventful than he had hoped. His family could not fly over to celebrate. His degree was mailed to him.

But he credits One Voice Canada for helping him get through his student years, and even became a volunteer to help other students who might be feeling isolated and overwhelmed.

“The Government of Canada is calling for thousands and thousands of international students,” said Singh. “But when they come here, they don’t know much about the rules, regulations and rights. If they get into trouble, who do they ask for help? Nobody reached out to me even though I was paying three times more than domestic students.

“When your family is not with you, you don’t have someone to hold your hand. Sometimes you just need to talk to someone.”