Amid a steep rise in workers’ claims for COVID-related workplace illness, B.C.’s labour movement is continuing to push for the province to legislate proactive measures like paid sick leave.

Last year, workers submitted 2,998 claims to WorkSafeBC for COVID-19 exposures in the workplace. Of these, the agency approved 1,763 claims, or 64.8 per cent of the total after removing claims that are pending, have been suspended, were filed in error or do not fall under the Workers Compensation Act.

“Those numbers are quite alarming,” said Sussanne Skidmore, the BC Federation of Labour’s secretary-treasurer.

But she added that they are not necessarily surprising. COVID-19 variants, which arrived in B.C. at the end of 2020, have been found to be more contagious than the original strain.

And while B.C. made it easier for workers to receive compensation by adding COVID-19 as a presumptive occupational illness last summer — in other words, workers are presumed to have been infected at work if they are in a higher-risk industry unless there is contradicting evidence — Skidmore said these figures again highlight the need to stop the spread in the first place.

To her, the solution is obvious and long-standing: paid sick days.

Over half of B.C. workers — in particular racialized workers, low-wage workers and newcomers to Canada — don’t have access to paid sick leave. While the federal government offers a temporary sickness benefit, advocates have called it inadequate.

“If you have a universal paid sick leave program that allows workers to stay home, then they’re not going to work and putting themselves and their co-workers at risk,” Skidmore said.

Teri Mooring, president of the BC Teachers’ Federation, agrees.

According to WorkSafeBC, education is second only to health care and social services when it comes to total COVID-19 claims. Education workers’ registered and allowed claims in the first four months of 2021 have surpassed last year’s total figures by 1.5 and 1.7 times respectively. Public school districts and elementary teachers have been hit particularly hard.

The province only started implementing a mask-wearing mandate for middle and secondary schools as well as staff in elementary schools in February. The teachers’ union had been calling for such a move since last September. In late March, the province expanded the requirement to encompass all students in grades four to 12.

Mooring says that these challenges have contributed to high stress levels amongst teachers.

“They feel like they have a lot of responsibility to keep a lot of people safe,” Mooring said, “without the necessary tools to actually do that well.”

With a paid sick leave program, Mooring said education workers, especially on-call teachers who are “amongst the most precarious workers who go from school to school,” could receive more support.

Vaccinating them as quickly as possible would help too, she added.

Education is not the only sector seeing major growth in COVID-19 claims in 2021.

Compared to last year’s numbers, the retail industry has seen the numbers of registered and allowed claims increase by 1.2 and 1.3 times respectively. The 2021 figures for transportation and related services have jumped even higher: doubling for registered claims and almost tripling for allowed claims.

Meanwhile, claims for sectors like agriculture that posed major concerns in the first wave have not surpassed 2020’s numbers. But they are very close to matching last year’s figures after just four months.

Mooring pointed out that WorkSafeBC claim figures likely represent “just the tip of the iceberg” of the actual COVID-19 spread in workplaces, because not every worker files a claim after an exposure. She called on the government to make it easier to access current data. 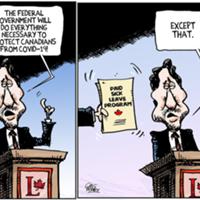 Why the Hold Up on Paid Sick Days? It’s about Power

Data related to workplace clusters recently released by the province supports Mooring’s claim. For instance, industrial and manufacturing businesses in Fraser Health saw around 450 cases between Feb. 1 and April 12 alone, which far surpasses the number of registered WorkSafeBC claims for manufacturing sectors in 2021.

But ultimately, the biggest policy push across the labour movement goes back to securing a universal paid sick leave program, with the BCFED calling for at least three paid sick days per year.

And after snubbing the idea in its 2021 budget, the B.C. government is now developing a program — though the province has not set a firm timeline for it.

“We’re hopeful that our government will recognize the need for a program that is permanent to put workers in B.C. in a better position,” Skidmore said.