Amid a raging pandemic, how do Canadian workers still not have paid sick days as a basic right of employment? It’s about power.

Real paid sick days, as a right of employment, are not rocket science. You tell your boss you’re sick, you stay home and you get paid as usual. But a majority of Canadians don’t have access to paid sick days. Low-wage workers are the most likely to be left twisting in the wind: nearly 90 per cent of British Columbians with incomes of less than $30,000 have no paid sick days.

The federal temporary sickness benefit introduced last fall is a poor alternative. That program requires an after-the-fact application, you must be off for the majority of a given week to qualify, it pays less than minimum wage and there’s a delay before you’re paid. This is untenable for workers and families living paycheque to paycheque. Not surprisingly, uptake has been low.

Employer-paid sick days not only benefit workers themselves, but also their co-workers and society more broadly — as the pandemic has shown so starkly, with workplace outbreaks a key source of COVID-19 transmission. But pandemic or not, paid sick time should be considered a minimal right of employment, period.

While lacking in Canada, employer-paid sick days are a legal right in many countries and across 12 U.S. states, including Washington, Oregon and California. The BC Employment Standards Coalition has called for provincial employment law to guarantee 21 paid sick days for all workers during the pandemic and seven days per year on a permanent basis. Employment standards are a clear example of provincial jurisdiction, and this is the most seamless way to implement employer-paid sick days.

Doctors, public health officials, labour leaders and policy experts increasingly see the imperative of employer-paid sick days. A strong majority of the public agrees. Even journalists have been pressing politicians on the issue in recent months.

What about small businesses that are struggling during the pandemic? This is a real concern, but the federal and provincial governments could easily cover the costs of paid sick days for those struggling businesses as a transitional measure.

Big or small, access to public subsidy for the cost of paid sick time shouldn't be a blank cheque to every employer. It should be focused on those actually facing hardship. Many employers are doing very well, such as corporate grocery chains and their billionaire owners, and others are making out like bandits, collecting wage subsidies while paying out dividends.

Blocked by the low-wage business lobby

With all the backing for paid sick days, who would stand in the way? The business lobby and low-wage employers in particular.

From the beginning of the pandemic, corporate lobby groups foresaw that permanent, legislated paid sick days might result from the pandemic, and they’ve been busy lobbying against it since.

In May 2020, a coalition of 21 corporate lobby groups — including the Business Council of BC, BC Chamber of Commerce, Greater Vancouver Board of Trade and Retail Council of Canada — sent two joint letters to the federal government about sick pay. They emphasized that businesses must not “shoulder any costs associated with time away from work” during the pandemic and called for a federal program along the lines of the inadequate one that was later announced.

In a second letter, the lobby groups hammered home their view that any pandemic sick pay, including the federally funded program, must be “sunset” when the pandemic ends. (To ensure no one missed the point, they even bolded and underlined the words “sunset” and “temporary.”)

Their aim seems clear enough: to push for a temporary federal program with no cost to employers, with the hope of forestalling the more obvious option of legislating paid sick days under provincial employment law.

To be clear, these lobby groups are not just advocating on behalf of mom-and-pop small businesses devastated by pandemic. Most low-wage workers — who are disproportionately women, people of colour and young — work for large corporations.

To date, the corporate lobby groups have largely got what they wanted from governments across Canada regardless of political stripe, despite the unprecedented public health crisis whose management hinges on people being able to stay home when ill.

The bottom line is that unless compelled to do otherwise by law, collective bargaining or other forms of organized power, low-wage employers will concede very little. Their business models depend on the availability of a pool of workers who remain in a state of economic insecurity and desperation. That’s why they have also been anxious to limit support to unemployed workers. 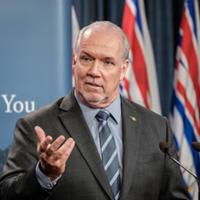 Some union leaders are fighting for all

The fact that we’re over a year into the pandemic and still without paid sick days for all workers is extraordinary. It tells us something about the power that corporate lobby groups and low-wage employers wield and raises some fundamental questions about our economic system.

It also stands out that, among B.C. workers, two-thirds of those in a union have access to paid sick days, compared to only a third of those without one. Moreover, unions have been leaders in the broader fight for legislated paid sick days for all workers regardless of union membership.

In low-wage workplaces, and in our politics, employers hold a lot of the cards. But that’s not inevitable. Organized workers can change the game — and change the balance of power.