Inside an army tent, Ronnie Grigg stands behind an old dresser painted with the words “staff lounge.” Folding tables are stocked with harm reduction supplies like sharps disposal bins; a naloxone kit hangs from the ceiling. The cloth walls of the tent are decorated with murals and a hand-painted sign that reads “Strathcona OPS.”

This is the only 24-hour all-access overdose prevention site operating full time in Vancouver right now. There are 24-hour services for women and female-identifying people.* Strathcona OPS served around 200 people living in a tent city that was located in Vancouver’s Strathcona Park for 11 months and others from outside the camp.

After the B.C. government hastily purchased or leased properties to house residents, the tent city has been mostly shut down.

Strathcona overdose prevention site has been running for six weeks. Except for Grigg, it was staffed entirely by people who were living at the park.

Grigg, an experienced overdose prevention site manager, worked to get the site up and running and was at the site every weekday to train residents and help manage it.

Peer workers at the site reversed around 12 overdoses and saw around 100 visits a day.

“Frontline harm reduction work is extremely invisible, and these guys are peak invisiblization, working in a park in a tent,” Grigg said. “This matters — this is life and death, this kind of response that we’re doing.”

Overdose prevention sites, also called safe consumption sites, were started by community activists in Vancouver during the height of the city’s overdose crisis in the fall of 2016.

Users consume drugs with workers or volunteers ready to intervene with first aid if they overdose. The low-barrier sites have since popped up across Canada.

During the pandemic, the illicit drug supply has become even more contaminated with additives like fentanyl — a powerful synthetic opioid — and benzodiazepines, powerful tranquilizers that can cause breathing problems and make it much harder to revive someone.

Deaths caused by poisoned drugs shot up during 2020, and the same alarming trend has continued in 2021.

Grigg said what the residents who worked at the site managed to accomplish is extraordinary, and they should be recognized for the work they did to save lives. Three people died at the tent city before Strathcona OPS was set up in late March; in the six weeks it operated, there were around a dozen overdoses and no deaths. (Only one of the three deaths has been confirmed to be an overdose.)

By the time these photos were taken, many of the original Strathcona OPS workers had already moved out of the park and into housing.

But Grigg said many of them had saved dozens of people from poisoned drug overdoses in the park before the site was in place.

“For six weeks, that the people with the least resources were able to do that — that fact is a matter of pride in that group,” Grigg said.

Although some other overdose prevention sites in the Downtown Eastside are open for 24 hours during the week when people receive their social assistance cheques and drug use and overdoses tend to rise, Grigg said Strathcona OPS was the only site in the city to run for 24 hours a day, seven days a week.

The intense schedule posed a challenge when it came to staffing the site and Grigg, who was only funded to work part time, ended up working extra hours. He credits the site’s success to the dedicated peer workers who staffed the site around the clock.

The 24-hour service is needed elsewhere in the city, because people don’t stop using drugs at 5 p.m., Grigg said. 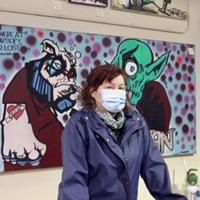 Some people who used Strathcona OPS came from Main and Hastings streets, a location blocks away, because Strathcona Park had the only supervised consumption site open all night.

Grigg said he’s never had to close a safe consumption site, and he’s concerned that people moving into supportive housing buildings won’t have access to the same kind of service.

He said supportive housing buildings have a variety of options. In some buildings, a designated resident on each floor can be called on to administer naloxone, which can reverse the effects of poisoned drugs. In others, common rooms are designated as safe consumption sites, while in some buildings, residents are encouraged to use drugs near where staff are stationed.

“That’s an important concern and request moving forward: that there are witnessed supervised consumption services in those buildings,” Grigg said.

“That’s a big concern, because transitions can often be isolating and disorienting.”

*Story updated on May 3 at 9:34 a.m. A previous version said the overdose prevention site at Strathcona Park was the only site open for 24 hours a day, seven days a week. SisterSpace is also open 24 hours, but is restricted to women, trans women and non-binary people who significantly identify as femme. WISH operates a 24-hour respite space for current and former female and femme sex workers which includes a peer witnessing program designed to protect against overdoses.