Almost 2,000 scheduled surgeries will be postponed in the Lower Mainland as record numbers of COVID-19 patients strain hospitals.

Four hospitals in the Fraser Health region and five in Vancouver Coastal Health will postpone surgeries for at least two weeks, starting on Monday.

There were a record 502 patients in hospital today, including 161 in intensive or critical care.

The news comes less than a week after officials said hospital capacity across the province remained ample, but that pressure was concentrated in high-transmission hotspots mostly in Vancouver and the Fraser Valley.

Many patients also recover in hospital long after their infectious classification as a COVID-19 patient has ended.

“This will ensure they have the resources necessary to care for patients,” he said. “The reason we’re taking these steps now is to support our health-care workers.”

The province also asked health-care workers in the community trained in critical and intensive care to volunteer to work in hospitals.

The news is “disappointing” for those whose surgeries have been postponed, Dix said, noting they will not be forgotten and that surgeries will be rescheduled as soon as possible.

In the meantime, anyone in need of medical or hospital care should absolutely seek it, Henry said. “Hospitals are safe.”

B.C. first moved to cancel all non-urgent scheduled surgeries on March 16 last year, anticipating a wave of COVID-19 patients that did not come until more than a year later.

At least 30,000 surgeries were cancelled or never booked as a result, but the province began its surgical renewal plan last May to deal with the backlog.

As of Feb. 4, B.C. had caught up on 95 per cent of the approximately 16,000 cancelled surgeries from last spring. It expects to make up the additional backlog by next spring.

Dix said the renewal’s success to date is proof B.C. can do it again.

Now that B.C.’s hospitalization numbers are on par with the worst-case modelling scenario, Henry and Dix stressed that people must take every step possible to limit contacts and transmission.

People should stay home, not travel outside their communities, wear a mask indoors or when distancing is impossible outdoors and not socialize outside their immediate households.

“We know what we need to do to slow the spread and give [health-care workers] a break,” said Henry.

On Monday, B.C. announced the current “circuit-breaker” restrictions, which are showing early signs of success, will be continued for five more weeks through the May long weekend. 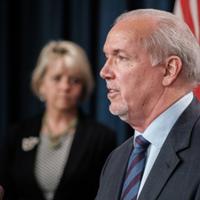 BC Changes COVID Course: Travel Bans and Vaccine for Those Over 40

And on Friday, Solicitor General Mike Farnworth will announce new measures to curb non-essential travel into B.C. and between health authorities.

Travel remains a key conduit for the virus from hotspots into the broader community, Henry said, particularly for variants. Canada moved to ban all direct flights from India and Pakistan today for 30 days because of growing concern about the B1617 variant first identified there.

About 33 per cent of eligible British Columbians have been vaccinated to date.

Henry expects immunizations to reduce hospitalizations among younger adults as more and more shots are administered.

“By the end of the May long weekend, we’ll be in a very different place,” she said.