It could take up to two years to clear B.C.’s estimated backlog of 30,000 non-urgent surgeries cancelled or postponed due to the pandemic.

“That’s 30,000 people who have had to endure pain and other suffering as we have worked together to deal with COVID-19,” Premier John Horgan said today.

The decision to postpone all non-urgent surgery was made March 16 to ensure hospital beds were available for a possible surge of COVID-19 patients.

The plan is the first major step in the province’s reopening plan announced Wednesday.

“Today we’ll start the process of relieving that pain for people who have been suffering due to a lack of elective surgeries,” said Horgan.

The decision to keep hospital beds open for possible COVID-19 patients has had major consequences.

About 16,000 patients on the waitlist would likely have had surgeries during the period if not for the pandemic measures.

And an estimated 24,000 people weren’t referred for surgeries because much diagnostic testing had been suspended. (Officials said the actual number is difficult to quantify.)

More than 17,000 urgent and emergency surgeries have taken place since March.

Operating rooms have also reported productivity decreases of about 30 per cent due to increased cleaning and screening precautions to prevent the spread of COVID-19 in hospitals.

“These protocols were needed when we were having significant community spread in B.C.,” said provincial health officer Dr. Bonnie Henry. “Now that we have flattened our curve in B.C., we need to take a different approach to this.”

Beginning today patients with previously scheduled surgeries will be contacted to confirm they still want to go ahead with the procedure while COVID-19 remains a concern. If they don’t want to, they won’t lose their place on the waitlist.

Non-urgent surgeries will resume as early as May 18 and the government says public operating rooms will be running at full capacity by June 15.

By mid-October the plan calls for public operating rooms to run at expanded capacity, with longer hours and weekend slots staffed by new nurse and surgeon hires.

B.C. hopes to hire all 1,550 graduating nurses this year, hire as many current part-time and casual nurses at full-time as possible and ramp up operating room training for approximately 400 nurses by October.

“It’s impossible for us to catch up without significant program changes and increased capacity,” said Health Minister Adrian Dix.

Surgeons will be asked to work more hours if possible and the province will try to avoid the typical “summer slowdown” in health care by asking health-care workers to reconsider taking vacation during July and August.

Horgan and Dix said they are confident there will be support from health-care workers to make this plan a reality.

“It’s very ambitious and I think ambitious can be infectious,” said Horgan. “We’re asking a great deal from people and I’m very confident they are prepared to give it.”

Since 2017 the province made significant gains in reducing surgical wait times, adding about 30,000 operating hours and 18,000 procedures, officials said.

Public health officials say the pandemic has wiped out that progress and forced a faster start on a surgery renewal strategy that was already being developed.

But the recovery plan could be sabotaged by a resurgence of COVID-19.

Henry says the estimated 17 to 24 months it will take to work through the backlog could become longer if more waves of the virus in the fall and winter cause non-urgent surgeries to be postponed again.

The toll the decision to cancel non-urgent surgeries took on patients’ health and well-being is not yet fully known.

Earlier this week B.C. reported that there were about 60 more non-COVID deaths since the pandemic than would have been expected. 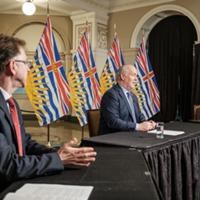 Here Is BC’s Plan to Reopen

These “excess deaths” continue to be investigated and officials will look into whether cancelled surgeries were a factor.

Dix also noted that hidden health issues that may have worsened during the extended wait period could emerge as more people are treated.

“In some cases we will be discovering things we would have discovered earlier,” he said.

Dix said a majority of the $250 million estimated for the plan’s first year of operation will go towards personnel, and the province is prepared to renew funding to continue making progress on the waitlist long after the pandemic’s backlog is cleared.

“This is the biggest challenge in surgeries that we have faced in our health-care system,” he said.